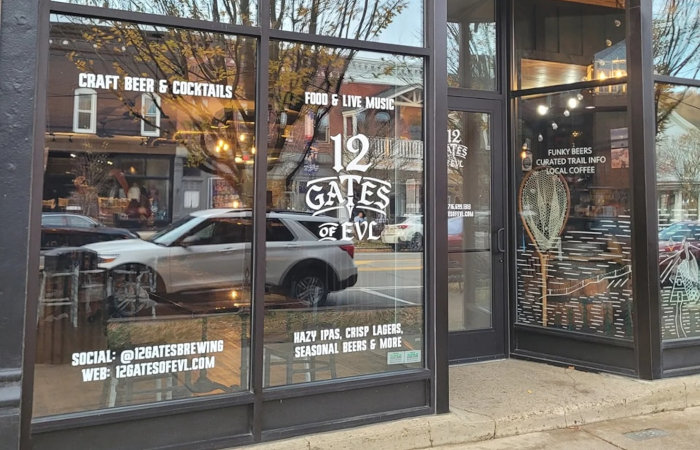 Williamsville’s 12 Gates Brewing have officially opened the doors to their second location at 14 Washington Street in Ellicottville. The brewery says they chose EVL because it has become “a vibrant community with a thirst for craft beer with an adventurous lifestyle.” The 12 Gates Jeep Club holds bi-annual Trail Rides just outside of town as well. “We’ve seen a lot of support for our beer in the area and we’re excited to share an even wider selection with the visitors,” Tom Kirchmeyer, one of the co-founders of 12 Gates, says.

Tickets Go On Sale for 2023 Buffalo on Tap Festival

On February 25, 2023, the Buffalo on Tap festival will return to the Buffalo Niagara Convention Center. Tickets will go on sale November 25 at 10am and include unlimited refills of craft beers, hard seltzers and ciders from 12 Gates Brewing, 42 North Brewing, Buffalo Brewing, Community Beer Works, Four Mile, Southern Tier, West Shore Brewing, Woodcock Brothers and more. There will be an afternoon and evening session. The event will also feature food, craft vendors and live music.

Buffalo Riverworks has released the quintessential Buffalo beer – Buffalo vs. Everybody Lager. The beer is brewed with Pilsner malt, corn, flaked barley and a double shot of Liberty hops to create a light sweetness that’s balanced with light crackery notes and an ultra-smooth clean flavor profile. Liberty hops add a delicate spice profile, while American Lager yeast from Omega adds a clean and dry touch, which lets all the ingredients shine. 16oz. 4-packs are available to go at Riverworks, Pearl Street and Lafayette Brewing right now.

This Saturday, at Terrace at Delaware Park, you can enjoy soups, stews, chowders and gumbos from your favorite Buffalo restaurants paired with craft beers from your favorite Buffalo breweries at the Stews & Brews Festival. Tickets are $45 and include unlimited food and beverage samples ($30 for unlimited soup samples). The event features restaurants such as Coles, Jack Rabbit, The Terrace, Liberty Hound, Joes Deli, Eckl’s Larkin, Dick & Jennys and Misuta Chows and breweries include Thin Man Brewery, Ellicottville Brewing, Hamburg Brewing, Big Ditch, Flying Bison, 12 Gates Brewing and Resurgence. You can purchase tickets here.