Community Beer Works are venturing into the 12 pack game with the new Community Pack, a variety pack that features cans of Good Neighbor IPA, Let’s Go Pils, That IPA and a special Brewer’s Choice selection, which is The Whale to begin with. The brand new Community Pack will be available at the brewery’s taproom and wherever great beer is sold, such as Wegmans, Tops and Consumer’s Beverages to name a few, as early as this weekend.

First Line has launched Chug Club, a mug club they have wanted to get off the ground since opening. There are only 100 available memberships, which entitles you to an annual member party, free birthday beer, $1 off on Wednesdays, 10% off merchandise, 15% off packaged beer and more. You can join by messaging the brewery on social media, or by email, phone or in-person at the brewery. The mugs will arrive in about 3-4 weeks. Anyone who signed up during First Line’s Kickstarter campaign automatically gets the first year free.

Big Ditch Brewing is set to drop the next entry into their Beer That Tastes Like Beer Series, West Coast IPA, on October 22, along with Power Ballad, a Double IPA collaboration with Community Beer Works. West Coast IPA features tropical and citrus aromas and flavor from Mosaic, Amarillo and Cascade hops, as well as moderate bitterness and a relatively clean and crisp finish.

Power Ballad returns October 22. The DIPA is brewed with Citra, Amarillo, and Mosaic hops to lend high notes of grapefruit, orange, passionfruit, and pine. It will be available on draft and in 16oz. 4-pack cans at both breweries. 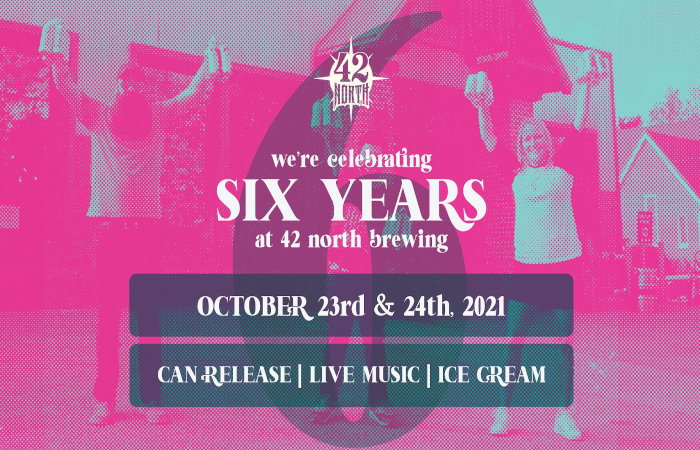 On October 23 and 24, 42 North is turning six and they are doing so with a big party. Starting at noon Saturday, the brewery will release 2 PLUS 4 EQUALS 6 Pineapple, Banana & Mango Sour IPA, which is packed with pineapple, banana and mango, softened with Milkadamia Macadamia Milk and vanilla and hopped with Azacca and NYS Excelsior hops. Also, Rosie’s Handcrafted Ice Cream Oatmeal Cookie Brown Ale Floats will be available (1-4pm) with live music Big J Blues (3-6pm) and Dead Alliance Buffalo (8-11pm). Then on Sunday, there will be live music by Bethy Mercer Duo.