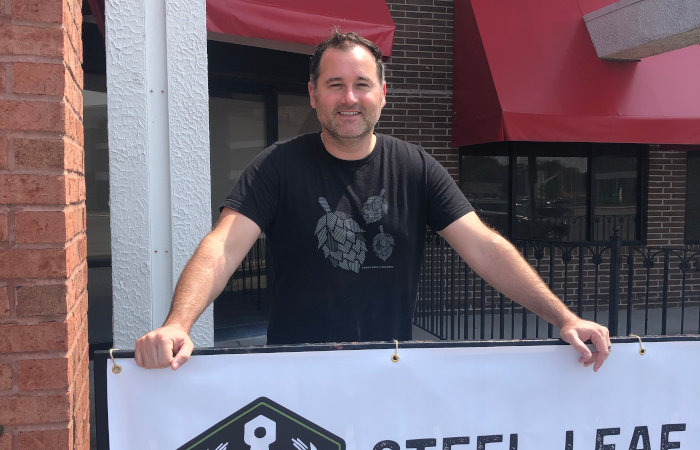 Steel Leaf Brewing, located inside the former Dave & Busters at the Eastern Hills Mall, will open their doors to the public on April 29. The brewery will feature a 3.5 barrel system feeding 10 taps, two stations at the bar, a full kitchen, merchandise store and three bookable event rooms. Steel Leaf will also feature a full patio featuring a circular fire pit and space heaters outside, as well as a 5,000 sq. ft. indoor/outdoor space. For the latest updates, visit steelleafbrewing.com.

Looking ahead to the summer months, Big Ditch Brewing has released Dock Jams, brewed with hibiscus flowers and New York State grape juice to be lightly tart with a big floral aroma and a delicious fruity finish. Dock Jams is light, fruity and refreshing with floral notes of hibiscus and grape, making it a good option for poolside. The beer is available on draft and in cans wherever great craft beer is sold.

It’s hard for me to even type, but Community Beer Works are celebrating their 10th anniversary on April 16 -17. In honor of the milestone, CBW is releasing 10th Anniversary Double IPA, a big, smooth, tropical fruit-forward DIPA with Cascade hops that’s dry-hopped with Citra, Mosaic and Ekuanot. There will also be pours from the CBW Beer Vault on the hour with members of the CBW brew team, brewery tours, a special pork dinner, limited silkscreened 10th anniversary posters, live music and DJs, Hatchets & Hops (2-6p), cornhole tournament (2-6p) and balloon fun with Mr. No the Balloon Guy (3-5p).

On April 16 (4-9pm), the first ever KBC – Kegs, Barrels, and Crafts, a beer, wine and whiskey event featuring more than 40 vendors, will take place at 500 Pearl. Breweries include 12 Gates, Brickyard Brewing, Five & 20, Hamburg Brewery, Windy Brew and more, as well as Leonard Oakes, Old Scotland Road Distillery, Buffalo Distilling and more. There will be live music and all attendees are eligible for an overnight stay at Aloft Buffalo Downtown with a $50 gift card to wxyz Bar + Lounge/Patrick’s Rooftop and a $50 gift card to Spare Lanes. Tickets are $45, here.

SATO Brewpub will release Syla, a 9.1% Belgian Tripel, to benefit the people of Ukraine, on April 15. For every pint sold, $2 will be donated to The Ukrainian American Freedom Foundation, a non-profit charity in support of Ukrainian medical and humanitarian aid. Originally designed and brewed in Kiev by Pravda Beer Theatre, the beer showcases fruity grape and mandarin orange flavors complimented by light clove, white and black pepper as well as the additions of spices including coriander.

West Shore Brewing is celebrating Earth Day in IPA form with the release of Earth Day IPA, a collaboration with Niagara Malt, a West-meets-East Coast IPA, brewed with traditional West Coast notes blended with fruit punch vibes, 100% NYS ingredients, and a blend of Cascade, Centennial, Chinook and Copper hops. Freshly Squeezed is an orange beer-mosa style wheat ale, “a beer that just makes you want to throw your aviators on and hang out with your best friends, even if one of those friends happens to be an alien. This is an orange punch to the face that you’ll enjoy, so don’t sloth style it and head on out,” the brewery says. Earth Day IPA will be available in cans, while Freshly Squeezed will be draft only.