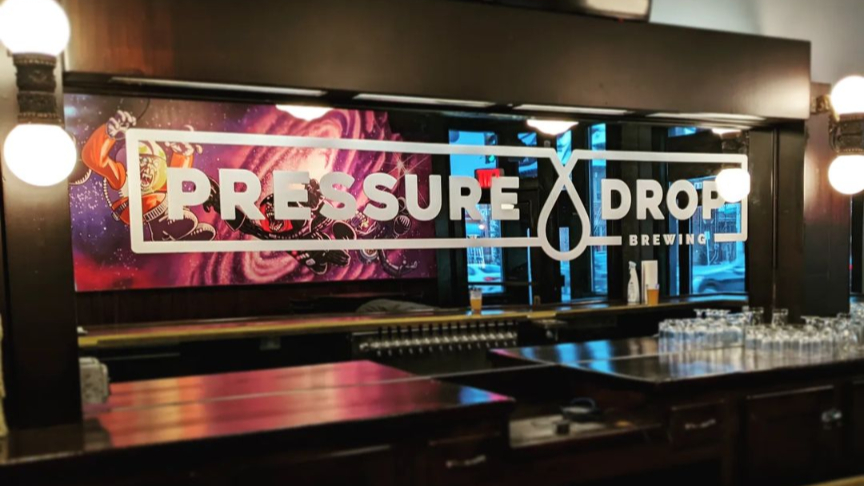 Pressure Drop Brewing is hosting an official grand opening of their new taproom at 1672 Elmwood Avenue in the former Nye Park Tavern / Papa Jake’s on April 22 (6pm). There will be a ribbon cutting at 6:15 pm and, to celebrate, Karl and Lexi will be behind the pine pouring your beers. This new location offers Pressure Drop beer, NYS liquor, wine and cider, along with a menu of shareable plates and brunch on the weekend. Pressure Drop Elmwood will be open Wednesdays and Thursdays, 3 pm – 10 pm, Fridays, 2 pm – 10pm, Saturdays, 11 am -11 pm, and Sundays, 11 am- 7pm.

In honor of the occasion, the brewery will have Hydroelectric Lettuce, a soft and full bodied IPA with notes of sharp citrus, earthy, forest floor and skunk and dank, on tap.

In honor of 4/20, Thin Man will release Blazed and Confused, a collaboration with Blaze Brewing and Tripping Animals Brewing . This IPA was brewed with Mosaic Cryo, Columbus and Chinook hops for danker than dank notes with dark berry and pine flavors backed up with a fluffy mouthfeel and low bitterness. In addition to the beer release, the brewery will have limited edition merchandise and a special ‘Munchie’ menu.

4. Drink Like a Girl Bridge Festival Coming to Rochester

The Drink Like a Girl Bridge Festival is taking over the Pont de Rennes Bridge in Rochester on April 30. The event features a 5k run, a 1k Beer Walk, live music from Amanda Ashley and Grosh, food trucks, more than 25 breweries, including Thin Man Brewery and Eli Fish Brewing. VIP session runs from 1:30 pm – 5:30 pm, general admission runs from 2:30 pm – 5:30 pm and the entire event runs from 11 am – 5:30 pm. A portion of proceeds will go to a female empowerment cause in Rochester. Use code ‘BUFFALOBEERLEAGUE’ at checkout to receive $10 off your ticket until April 29. More information can be found here.

For Autism Awareness Month, WNY Beer Trail’s April meet up event at Nickel City BrewZ (1pm – 4 pm) will benefit the Summit Center. Nickel City BrewZ, DJ BonkRz, Hope Rises, A Beer in Review 716 and Buffalo Brews Podcast will co-host the free event, which features a cash bar, 50/50 and raffles featuring autographed jerseys of past and present Bills and Sabres players like Rob Ray, Darryl Talley and Isaiah McKenzie. Nickel City BrewZ is donating 20% of draft sales from the event to the fundraising effort and WNY Beer Trail is donating a portion of sales for the month of April to Summit as well.

6. Win Free Beer for a Year From Southern Tier Brewing

Southern Tier Brewing and their newly launched rewards program, Liquid Culture Society, is giving away free beer for a year, all-expenses paid trip to Philadelphia to the Victory Brewing taproom and more. In order to be entered, all you need to do is become a member of the Liquid Culture Society to be entered. Other prizes include $1000 taproom gift card, kegerator, $500 taproom gift card, Airpod Pros, private event for up to 12 people and more. Sign up at lcsrewards.com or by downloading the LCS Rewards app in the Apple or Google Play Store.