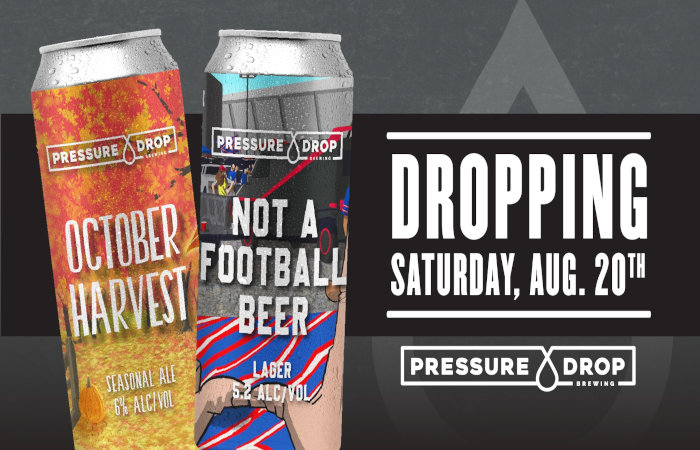 2. Celebrate the Sour Days of Summer at the Beer Keep

The Beer Keep is highlighting all things sour at their Sour Days of Summer event on August 20 (12pm). Among the sour beers on draft will be KCBC Hippopocalypse (Tripping Animals collab), Firestone Walker Primal Elements, Froth Naked Lollipop (Blue Raspberry), Dewey Secret Machine (Summer Punch) and Oxbow Momoko Peach Farmhouse Ale, along with unique bottle offerings from Oxbow Brewing, Jester King Brewery, Odd Breed Wild Ales, Allagash Brewing and more. There will also be specials on all sours to-go, including an extra $1 off.

On Saturday, August 20, First Line Brewing is turning two and they are celebrating! Starting at noon, party goers will have the chance to dunk any one of the brewery’s four owners in a dunk tank for charity, including Shane Stewart and Michael Maiorana, the return of Hot Blonde Watermelon Pilsner and PB&J Sour, live music throughout the day from Zach Gerken and Dan Minogue, food from Mollys Wood Fire Pizza Truck and Tees and Taps green and club fittings. Stay tuned to facebook for updates and more information.

The 2022 Borderland Music & Arts Festival, which takes place September 17-18 at Knox Farm State Park in East Aurora, has announced its brewery lineup for this year, which is once again predominantly local. The lineup includes Community Beer Works, 42 North, Hamburg Brewing, Resurgence, Southern Tier and 12 Gates Brewing. For more information on the festival, which will be headlined by The Flaming Lips and Portugal. The Man, and to purchase tickets, click here.

The first ever WNY Brewers Guild Charity Golf Tournament, set to take place August 29 at Chestnut Hill Country Club, will offer golfers and beer enthusiasts an opportunity to play a round with local brewers while enjoying local food and beverages, beer sampling, hole challenges and raffles. You’ll get a chance to meet brewers, sample their beers and raise money for local charities such as Habitat for Humanity, ASPCA and Feedmore WNY. The cost to participate is $120 per person and includes golf, breakfast, lunch, steak dinner and food and drinks on the course. The 4-person scramble tournament will start at 10 a.m. with a shotgun start. Register at WNYBrewersGuild.com.