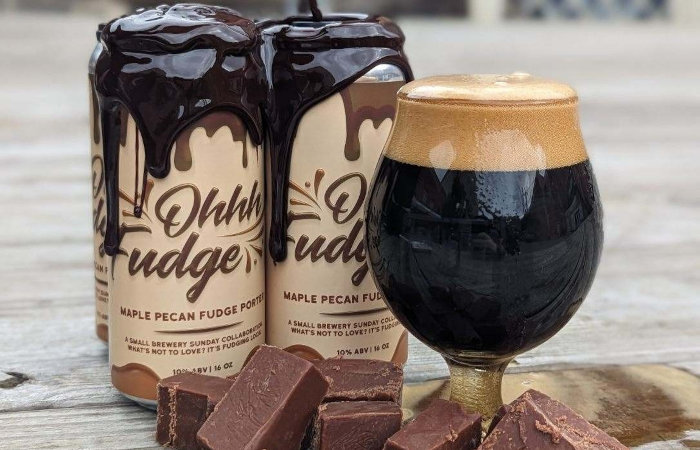 Ohhh Fudge is back for a third time, this time as a Maple Pecan Imperial Porter. This beer is a special collaboration between 8 local breweries – West Shore Brewing, Lilly Belle Meads, Big Ditch Brewing, Resurgence Brewing, Rusty Nickel Brewing, Eli Fish Brewing, Big Inlet Brewing and Pressure Drop. This year’s variant clocks in at 10% and lends a sweet maple nose with warming pecan notes and roasted dark chocolate base. Ohhh Fudge is available on draft and in cans at any of the participating breweries.

Brickyard Brewing is set to unveil a special cask of their Number 14 East Coast IPA, a beer brewed and named in honor of Bills star Stefon Diggs, conditioned on pineapple at their taproom on January 20. This soft, easy drinking IPA will be bursting with even more tropical notes of pineapple, coconut cream and citrus. Doors open at 5pm and availability will be extremely limited.

This Friday, January 20, Thin Man is not only bringing back Burning Money, an IPA brewed with copious amounts of El Dorado and Simcoe, Citra, Cascade and Mosaic hops, they will also debut Clickers Hazy IPA, a new collaboration with Xul Beer Co. Clickers features Citra, Strata, and Nelson Sauvin hops for notes of grapefruit peel, grape must, white peach and honeydew. In addition, Xul is bringing along 9 other beers for a tap takeover at Thin Man Elmwood. Burning Money and Clickers will be available on draft and in cans.

After the Sabres honor legendary goalie Ryan Miller this Thursday, Resurgence will follow suit on Saturday with the Ryan Miller Mixed Pack Release Party (2-5pm), where guests can meet Miller and purchase 4-packs with a signed card and signed poster art. The Ryan Miller Mixed Pack features 391 IPA, a hazy IPA that celebrates Miller’s record 391 wins, and Milz Pilz, a pilsner with white grape notes. A portion of proceeds will be donated to the Steadfast Foundation, an organization dedicated to assisting, inspiring, and empowering people living with disabilities by helping them to become more independent. Both beers will be available on tap and in cans and cases to go.

5. Hofbrauhaus to Hold Lagerfest to Celebrate 100th Batch of Lager

In honor of brewing their 100th batch of Premium Lager, Hofbrauhaus will hold Lagerfest on January 19 (4pm). The event will feature $5 half liters of Lager, $10 liters of Lager, a free liter of Lager for Stein Club Members, a complimentary Lager toast at 6:30pm, $149.99 promotional sale for Stein Club memberships, live music from The Auslanders (6-8pm) and more. For reservations, call (716) 939-2337 or visit hofbrauhausbuffalo.com.