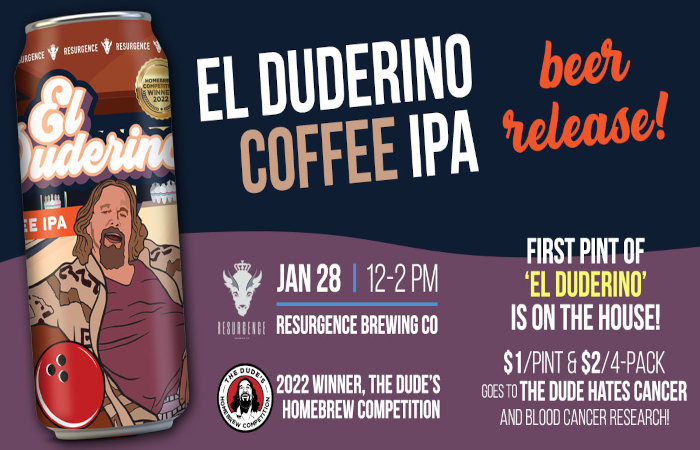 The 2022 winner from The Dude Hates Cancer Homebrew Competition, El Duderino Coffee IPA, will see a release on January 28 (12pm) at Resurgence. The beer comes from the minds and brew kettles of homebrewers Brian and Lori Meyer. The first pint of El Duderino is on the house and $1 from every pint and $2 from every 4-pack sold at the event goes to The Dude Hates Cancer and blood cancer research. El Duderino will be available on draft and in 4-pack cans to go.

This weekend, Big Ditch Brewing will bring back a pair of popular brews in Cyclops Romance IPA and Excavator Brown Ale. Cyclops Romance is a hazy IPA brewed with Nelson Sauvin, Motueka, and Vic Secret hops for aromas and notes of honeydew, white grape, and mandarin orange, while Excavator, debuting in 16oz. cans, features seven different malts to achieve a rich, yet smooth flavor balance. Both beers will be available in 16oz. 4-packs and on draft at our taproom beginning on January 27 (11am). They will see limited distribution next week.

On January 27, Thin Man will release a new collaboration with Meier’s Creek, Orange Pumps, a crisp, refreshing and crushable spunded lager with orange peel, on draft and in cans to go. Then, on January 28, the brewery is holding a viewing party and ticket giveaway at their Elmwood location. At 6:30pm, Thin Man will air the Syracuse and Virginia Tech game and will give away 2 tickets to Syracuse vs. Duke on February 18 (Section 122 Row AA). For every pour of Orange Pumps, you get a ticket. Winner will be chosen via raffle after the game.

Hofbrauhaus is tapping their Doppelbock on February 4 (6pm) and will be joined by celebrity keg tappers from Habitat for Humanity Buffalo. Doppelbock features notes of dark fruits like plum and raisin and toasted bread. The Auslanders will take the stage from 6-8p. Guests will receive a complimentary 0.3 liter of Doppelbock and Stein Club members will receive a full liter. For reservations, call (716) 939-BEER (2337) or visit hofbrauhausbuffalo.com.