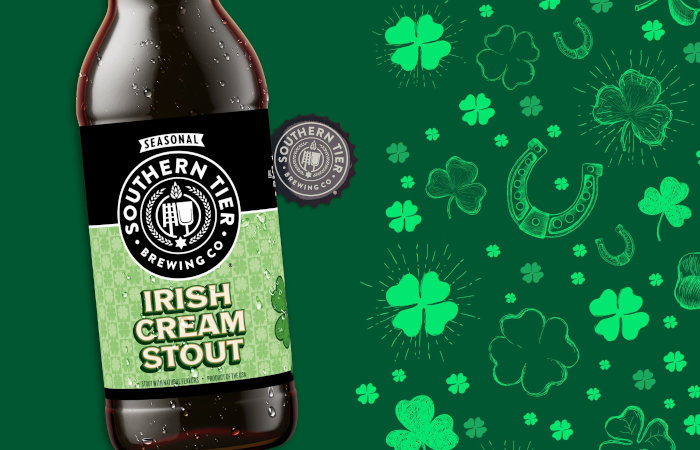 Southern Tier Brewing is looking ahead to spring with the release of Irish Cream Stout, an Irish cocktail inspired stout that features notes of vanilla beans, fresh ground coffee and Irish whiskey with a rich creamy finish. Irish Cream Stout will be available everywhere great beer is sold soon and on draft and at all Southern Tier taprooms.

2. CollaBEERation Festival 2.0 Coming to The Powerhouse

Members of the Buffalo Beer Geeks have teamed up with a number of Western New York breweries, cideries and meaderies for the CollaBEERation Festival, which will feature small batch creations from 34 breweries, 3 cideries, 2 meaderies and more that the Buffalo Beer Geeks group and breweries created specifically for this event. Among the participants are Belt Line Brewery, Big Ditch Brewing, Fifth Frame, Pantomime Mixtures and more. Along with other NYS breweries pouring beers, there will be vendors, food trucks and more. CollaBEERation 2.0 will take place February 20 (12-5pm). Tickets are $55.

Thin Man is kicking off 2022 right on January 7 with the release of Forcefield Triple IPA and Starchild Mild English Dark Mild. Forcefield is brewed with Simcoe, Pacific Sunrize and Amarillo hops to create notes of strawberry, orange and bubblegum, while Starchild, the first release in Thin Man’s new session beer series, is a traditional English dark mild with notes of coffee and caramel. Forcefield is available on draft and in cans, while Starchild Mild is a draft only at all Thin Man taprooms.

First Line is bringing back their Iced Coffee Pilsner, brewed with Bean Bastard coffee that’s light and full of coffee flavor, this time in cans. Iced Coffee Pils is available in 4 packs to-go for $12.99 at the brewery right now. First Line has also announced new hours for Tuesdays, 4pm-10pm.

Get your New Year started right with Hofbrauhaus on January 5 as they hold their first keg tapping of 2022, their new Schwarzbier. A parade and barrel tapping will be held at 7pm. This is a dark German lager that balances roasted, yet smooth, malt flavors with moderate hop bitterness. The lighter body, dryness and lack of a heavy aftertaste helps make this beer quite drinkable. Make a reservation here to be there and get a free sample.

The Brewer’s Invitational, New York Beer Project’s annual beer festival which features limited edition and small batch beers, returns on February 6 (2-5pm). Guests will receive a commemorative tasting glass, gift card for NYBP’s gastropub menu and access to tastings of creative craft beers. At the event, you can mingle with brewers, brewery owners and fellow beer lovers. Tickets are $45 and can be purchased here.

5 Buffalo Beer Briefs to Know This Week: May 11

10 of the Coolest and Most Unique Mobile Businesses in WNY

The Ultimate Guide to Upcoming Meat Raffles Around WNY

10 Places to Get a Delicious Iced Coffee in WNY