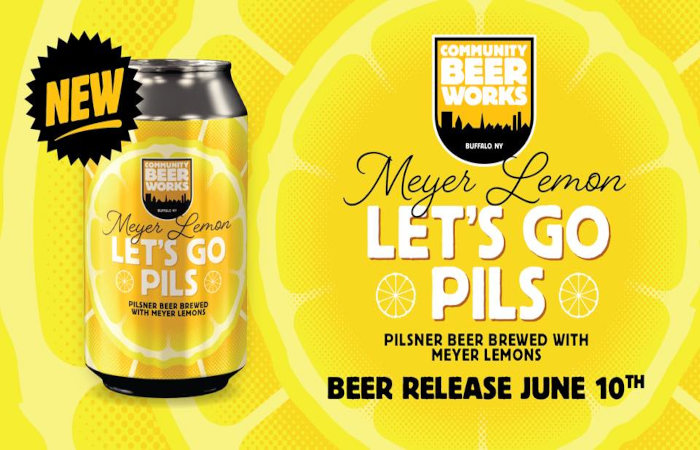 In a summer beer re-release two years in the making, Community Beer Works is bringing back the Meyer Lemon version of their Let’s Go Pils on June 10 (3pm). This beer is brewed with flaked corn, pilsner malt and German hops to create a light and clean lager with a lemony kick. And to make things even better, Meyer Lemon Let’s Go Pils will be released in 6-pack 12oz. cans this time around. It will also be available on draft.

Brickyard Brewing is also jumping into the summer beer ring with Blueberry Lemon Ale, available in cans and on draft June 10. The beer features Motueka hops and a dose of real lemonade and natural blueberry to create a crisp and fruity summer crusher. The brewery also recently released Baby Bronco, a session version of White Bronco IPA. Baby Bronco is 4.7% and is hopped with Citra, Galaxy, Mosaic, Amarillo and El Dorado hops for a hazy, crushable IPA with tropical fruit notes. The beer is available at limited retail outlets, in addition to their Lewiston taproom.

42 North will drop the next installment of their The Brewery at the End of the Universe series, Finite Probability Creamsicle Gose, on June 10. This new beer is packed with tangerine, pineapple and cara-cara orange vanilla topped off with milk sugar for a tart, yet smooth, citrusy brew. Finite Probability Creamsicle Gose will be available in cans (16oz. 4-packs) and on draft at 42 North and wherever your favorite local craft beer is sold the following week.

5. The Eli Fish Brewing Carnival Is Coming to Town

Thin Man is adding to the list of weekend beer releases with Wave of Phase New England IPA with Papaya, a collaboration with Singlecut Beersmiths, and Tankard DDH Czech Lager. Wave of Phase is a soft and easy drinking IPA brewed with Australian Galaxy, New Zealand Motueka and U.S. Citra hops and papaya, while Tankard is brewed with French and British malts and hopped with Czech Saaz, Kazbek and Sladek for notes of fresh cut grass, red grape and bready malts. Both beers will be available in cans and on draft on June 10 at all Thin Man locations.