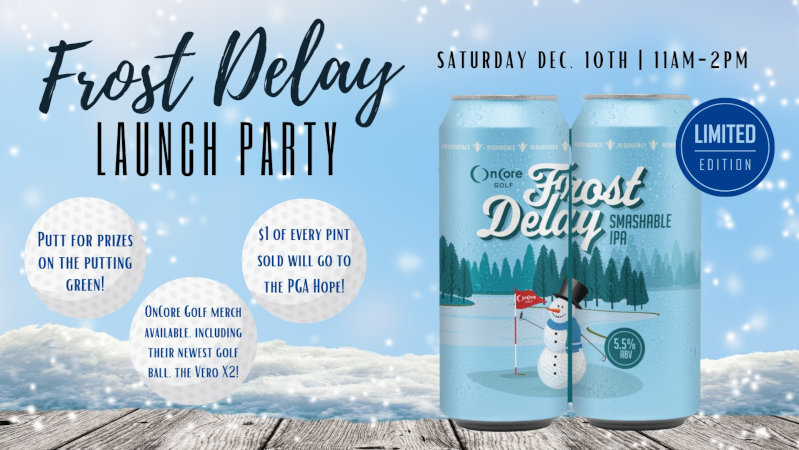 After the success of Smash Factor IPA earlier this year, Resurgence Brewing and OnCore Golf have once again teamed up, this time for Frost Delay IPA, a limited edition 5.5% winter IPA, which will be released on December 10 (11am). For the release, you will be able to putt for prizes on Resurgence’s putting green and meet the OnCore Team and see their newest golf ball, Vero 2. Resurgence will also be donating $1 of every pint sold of Frost Delay to PGA Hope. The beer will be available in 16oz. 4-pack cans to go as well.

Clarence’s West Shore Brewing is the latest brewery to circle the wagons with the release of a Buffalo Bills-themed beer, Stiff Arm Lager. This 5% lager is clean, crisp and delicious and will help you throw furious quarterback style stiff arms, but only after you’ve had a few. Stiff Arm Lager will be available on draft and in 16oz. 4-pack cans on December 9 at West Shore, Rusty Nickel Brewing, Clarence Deli and more places soon.

Hamburg Brewing is ringing in the holidays with their 12 Days of Christmas promotion, which begins December 12. Here’s how it works: Fill out this form, visit the brewery daily between Dec. 12-23 and receive a punch on your loyalty card (available at the taproom), then turn in your completed loyalty card at the brewery by Dec. 24 at 4pm to enter. The grand prize winner will receive a Private Fireside Chef’s Table Dinner, which includes a private dinner at Hamburg Brewing for 12-18 guests, beer and cider tasting with brewers Jason and Sam and a multi-course custom beer pairing experience.

Calling all homebrewers! Big Ditch Brewing wants you to brew their flagship IPA, Hayburner, and wants to give you the shot at free Hayburner for a year in the process.  Hayburner Home Brew Kits are now available; each kit includes instructions and ingredients to make 5 gallons of Hayburner. Then, after you finish your homebrew, submit three bottles by March 31 to be entered to win free Hayburner for a year. Prizes will be awarded for 1st, 2nd and 3rd place. Kits are available for pickup at Big Ditch’s taproom or you can ship anywhere in the U.S. here.

Froth, a brewery best known for heavily fruited sours, has introduced a pair of new house lagers, as well as traditional Lukr side pull lager taps. These drafts, which will be available on tap at the brewery year round, will be served out of tradition 19.5 mugs. House Beer #1 is an amber Czech lager backed by a complex malt bill to create notes of sweet caramel and graham cracker notes and House Beer #2 is a pale Czech lager that’s rich and refreshing with a balance of biscuit and floral notes. Both beers are available now.

It’s time to make some room in your beer fridge because Thin Man Brewery is releasing three beers this weekend. Barrels In Harmony, a 12.4% barrel aged stout blend of an imperial stout aged in maple syrup barrels, a Baltic porter aged in Elijah Craig barrels, and a barleywine aged in Four Roses barrels, infused with coconut and vanilla, will be released in bottles. The brewery will also tap two draft-only brews, Strictly for the Weather West Coast IPA, brewed with Chinook, Centennial and Columbus hops, and Through the Haze I Can See IPA, brewed with Cryo Mosaic, Cryo Citra and Cascade hops. All three will be available at both Thin Man taprooms Dec. 9.

7. Sip While You Shop at 500 Pearl’s Christmas Spirits Holiday Market

On Dec. 7, you can sip while you’re doing your holiday shopping at 500 Pearl’s Christmas Spirits Holiday Market (5-9pm). The event will feature more than 20 craft vendors, such as 26 Shirts, Seven One Six Wood Design and Buffalo Bead Bar, and you can sip while you shop with tastings from East Aurora Brewery, Pressure Drop, Hamburg Brewing, Big Ditch, Southern Tier Brewing and Hartman’s Distilling. Tickets are $8 and can be purchased here. Right now you can use code DIGGS for $5 tickets. You will also be entered to win the door prize, an autographed Stefon Diggs jersey.