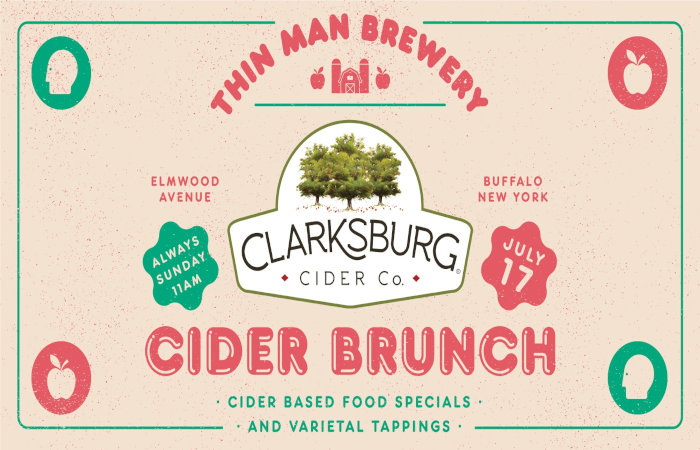 For their next edition of Cider Brunch on July 17 (12pm), Thin Man is teaming up with Clarksburg Cider at their Elmwood location. They will have Clarksburg’s Pineapple Hibiscus, Dry Hard Cider and Double Dry Hopped Hard Cider, along with Thin Man beers, cider-infused brunch menu specials and cider-infused mimosas and cocktails. Thin Man’s Cider Brunch is a monthly event where Thin Man pairs with a cidery to feature their cider in your glass and on your plate.

Soon after installing their own in-house canning line, New York Beer Project will release Destination Galaxy IPA in cans on July 13 (limit 2 per customer). Destination Galaxy IPA is a Galaxy hopped version of their flagship Destination IPA, to be released in conjunction with the next Supermoon. Each 4-pack of Destination Galaxy IPA comes with a pair of 3D glasses to view the can label in 3D. “We’re so excited that our guests will now be able to enjoy 4-packs of NYBP beers from home,” NYBP says. “From tank to can, it truly doesn’t get fresher than that. Come and join us as we get the canning party started.”

12 Gates is officially in summer beer mode with the release of Off-Road Session IPA on July 15 (12pm) and House Lager on July 26. Inspired by the 12 Gates Jeep Club, Off-Road IPA is light bodied, but full of flavor. To celebrate the release, Cheer Up will perform (8pm). House Lager is a light and crisp German-style Pilsner that will join 12 Gates’ year-round core flagship lineup. Both beers will be released in 12oz. 6-pack cans and draft at the brewery and wherever else great beer is sold.

The latest fruited gose at 42 North Brewing, Gose Down Easy Pineapple & Ginger Fruited Gose, will be released July 16 (12pm). This beer is balanced and refreshing with notes of ginger, pineapple and a touch of salt. Gose Down Easy will be available on draft and in 16oz. 4-pack cans at 42 North’s taproom and wherever great beer is sold after that.

First it was Jason’s fault, now its Sam’s. Hamburg Brewing has released the latest iteration of their new Brewer’s Fault IPA series, Brewer’s Fault: Sam Cold IPA. When this IPA was fermented and dry hopped colder than usual, it highlighted the bright hop flavors of Vic Secret and Cascade. Both hops team up to bring notes of citrus and pine to pair perfectly with the crisp, cold finish. You can find Brewer’s Fault: Sam on tap and 16oz. 4-packs to go available at the brewery.

Steel Leaf Brewing has tapped Berry Rancher Sour, a new sour ale brewed with Jolly Ranchers, raspberries, blueberries, marshmallow, vanilla and a touch of hops. Each pour you order comes complete with an individually wrapped Jolly Rancher candy. “At Steel Leaf, we are always trying new things and this couldn’t have turned out better,” the brewery says of the new beer. “This absolute blast of delicious sweetness comes from using tons of our favorite Jolly Rancher candy and a heavy dose of blueberries and raspberries.”

7. Windy Brew Partners With Tailgate.Beers on New Lager for 716 Day

Windy Brew and Tailgate.Beers have partnered up on Tailgate Brew, a new crushable lager for 716 Day. The beer, set to be released on July 16, is a traditionally lagered pilsner with Motueka hops. “They wanted a beer that they could call their own; something smooth, crushable and worthy for their pre-table smashing pleasure,” Windy Brew Head Brewer Russell William said. “It came out with everything you would want in it and at a solid, easy drinking 4.2%.” The entire Tailgate.Beers crew will be out in full force at Windy Brew for the release party.