7 Buffalo Beer Briefs to Know This Week: May 18 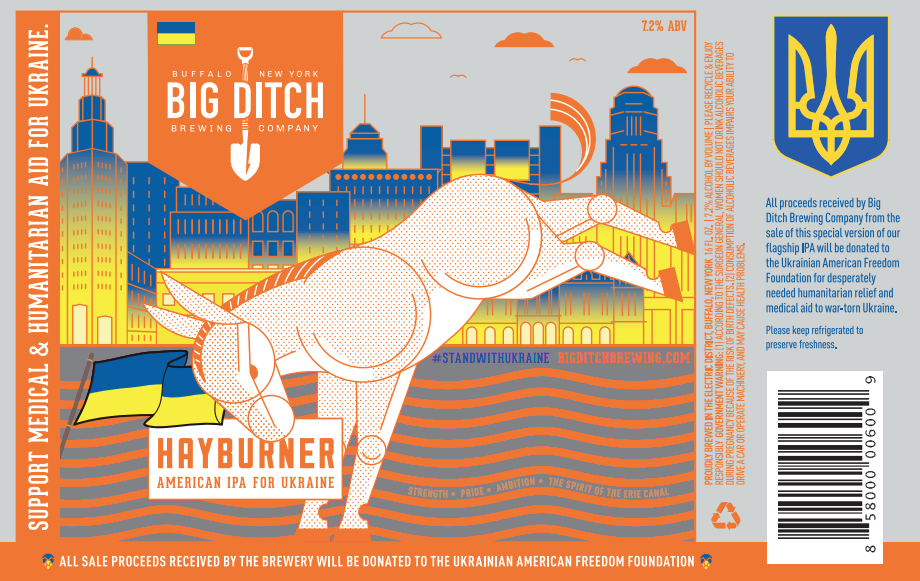 Big Ditch is once again joining the relief efforts for Ukraine, who have endured nearly three months of a Russian invasion. And to do so, they are employing the strongest weapon in their arsenal, Hayburner IPA. On May 20, Big Ditch will release limited edition cans of their flagship IPA, rebranded as Hayburner for Ukraine. 100% of proceeds will be donated to Ukrainian American Freedom Foundation Inc, who provides humanitarian relief and medical aid to Ukraine. Hayburner for Ukraine will be released in limited edition 16oz. 4-pack cans.

Big Ditch is turning back the clock for their 7th Anniversary Party on May 19 (5pm). As an homage to craft beers that influenced the industry, they brewed clones of Boston Lager, Allagash White, Samuel Smith Chocolate Stout, Two Hearted IPA, Orval Belgian-style Pale Ale, Bigfoot Barleywine, Pliny The Elder and Dark Lord Imperial Stout. They will also have food specials, free limited edition t-shirts or sunglasses for the first 150 guests, Make Me Wanna Stout Mudslides, raffles and live music from Ed Wyner. No tickets needed.

Hamburg Brewing has released a new fruited sour, Berry Berry Smoothie, a 7% sour ale brewed with 100% real fruit, including blackberry, blueberry, raspberry and strawberry, as well as lactose. “Sour, fruity and super fresh. If you love smoothie beers, you’re going to want to try this!” the brewery says. Berry Berry Smoothie is available on draft right now at Hamburg’s taproom, as well as in 4-pack cans to go.

To mark their one year anniversary, Jack Rabbit and Thin Man Brewery have collaborated on Jack Rabbit Slim, a 4.9% new session IPA. “This 4.9% hop forward hazy IPA is packed with flavor, while being light enough to crush a few while sitting on our patio or rocking out to one of our bands,” Jack Rabbit says of Jack Rabbit Slim. The beer will be available in cans at Jack Rabbit, as well as all summer long at both the bar and at Thin Man.

Southern Tier Brewing’s annual celebration, Public Day, returns to Lakewood on May 21 (11am). The party will feature three bars serving dozens of Southern Tier specialty beers, including standard releases, seasonal releases, one-offs, the entire 2X series, Blackwater series, and many other limited releases. There will also be live music from Small Town Rollers (1-4pm) and The Earth Quakers (6-9pm) and food specials. The event is free and open to the public.

Resurgence Brewing and Magic Bear Beer Cellar have teamed up with Pints For A Purpose to help the Buffalo community in the wake of Saturday’s tragic shooting on a new beer, Raspberry WeissBEAR, which will be tapped on May 20 at Magic Bear (5:30pm). All of the proceeds will go to help FeedMore WNY. Cash donation bins will be set up as well. This 5.2% fruited hefe is loaded with the standard hefe flavors and aromatics of banana, light citrus, clove and a touch of bubblegum and raspberry.

Orchard Park’s First Line Brewing is releasing BuffaloStrong IPA as an effort to help the Buffalo community mourn and heal in the wake of this past weekend’s tragic shooting. A portion of proceeds will go to the Imagine for Youth Foundation, who help disadvantaged kids by providing them with supplies, resources and equipment. “Buffalo will come out of this. This is not a representation of our city,” the brewery said. “We continue to pray for the families and loved ones involved in that tragic event. We pray and hope for change in this world.” BuffaloStrong, a bright and citrusy IPA with a soft mouthfeel and smooth finish, is available on tap at First Line right now.