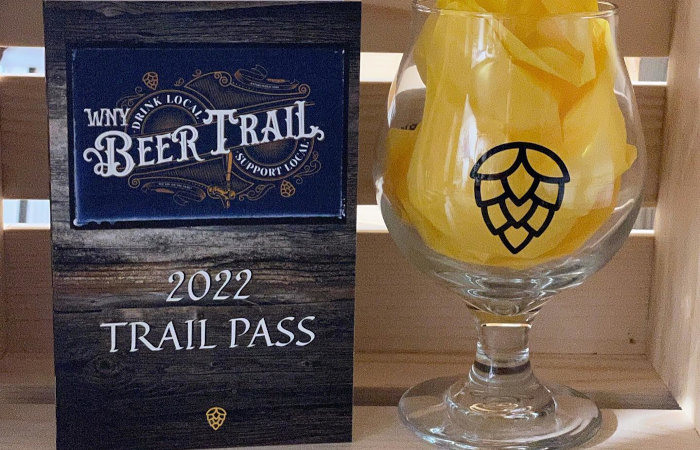 The WNY Beer Trail has launched their 2022 Trail Pass. When you purchase a program booklet, you’ll enjoy two half price beers during your first visit at over 40 breweries, bars, bottle shops, distilleries, cideries, meaderies and restaurants. There are six new locations for 2022 – Brickyard Brewing, Community Beer Works, Clarksburg Cider and (soon to be open) Spotted Octopus, Steel Leaf Brewing and One-Eyed Cat Brewing. Also new for 2022 is a map to track your progress and a mobile check-in feature. Passes are available at the Totally Buffalo Store in Amherst, Buffalo Gift Emporium in Tonawanda and wnybeertrail.com.

Mayville’s Big Inlet Brewing is celebrating their third anniversary on November 13 (5pm). The festivities include free coasters to all attendees, $5 pints all night long, special merch giveaways and music at 5:30pm by The Growlers. For more information, click here.

Big Ditch Brewing is getting into the holiday spirit with a trio of new beers, including Kringle Juice, Cran-Berry Vision and Cyclops Romance IPA. Kringle Juice IPA, out now (cans/draft), is smooth and refreshing with flavors of citrus and pineapple and a nice bitterness on the finish, Cran-Berry Vision (cans/draft), out November 12, is a sour ale brewed with cranberries, orange zest, cinnamon, oats and milk sugar, and Cyclops Romance, also out November 12 (cans/draft), is a hazy IPA brewed with Nelson Sauvin, Motueka and Vic Secret hops with notes of honeydew, white grape and mandarin orange. Happy holidays!

12 Gates Brewing has released Choco Banana Hefeweizen, a 6% hefewezien that focuses on the banana profile of the yeast, with some chocolate added in, according to Head Brewer Matt Gordon. Choco Banana Hefeweizen is now available at 12 Gates’ taproom in 16oz. cans. It will also be hitting shelves at local craft beer retailers soon.

6. Flock of Flamingos Sour Back at Belt Line

Flock of Flamingos, a fruited sour featuring blood orange, pomegranate and tangerine, brewed in collaboration with the Coalition For Rapid Consumption group, returns to Belt Line Brewery on November 16 3pm). Flock of Flamingos will be available in 4-pack cans, as well as on draft.

On November 12, Community Beer Works are releasing an imperial version of their Choco Taco Whale Brown Ale. Clocking in at 7.8% and made with real sugar cones, vanilla bean, chocolate and peanuts; Imperial Choco Taco Whale is a delicious dessert wrapped in a can. The beer will be available on draft and in 16oz. 4-packs cans. Preorder at communitybeerworks.com/deliveries.