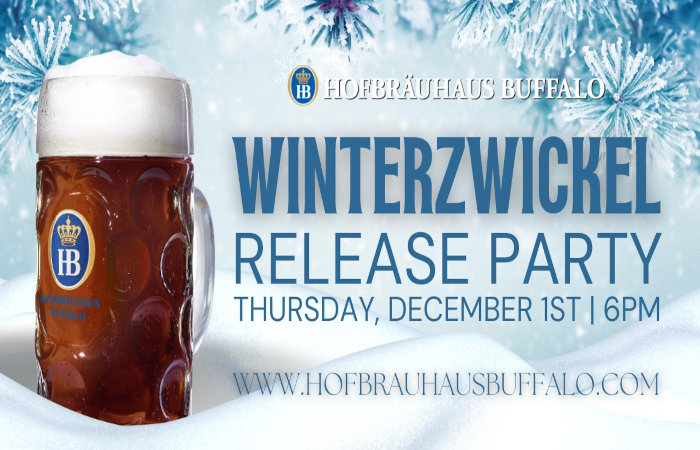 On December 1, Hofbrauhaus Buffalo will tap their Winterzwickel, a 5.5% dark beer specially brewed for the winter season with hints of caramel, toasted bread, plum, raisin and chocolate. Join the brewery for a parade and barrel tapping at 6pm. All guests will receive a complimentary 0.3L of Winterzwickel, while Stein Club Members will receive a complimentary liter. Winterzwickel pairs well with Schweinebraten, Jägerschnitzel, and Käsekuchen, according to the brewery.

3. Drink Homebrew for a Good Cause at Santas of Swig Fundraiser

The 2022 Santas of Swig Fundraiser, presented by the Sultans of Swig Homebrew Club and Santas of Swig, which raises money for the Matt Urban Hope Center, takes place December 3 (1pm) at Buffalo Iron Works. A $20 donation buys samples of a number of beers made by area homebrewers. Vote for your favorite beer and the winning homebrewer will receive a number of prizes. Baskets from local breweries will be raffled off (donations of new, unwrapped toys gets you $10 in tickets). Tickets will be available at the door and can be purchased online at SultansofSwig.com.

Habitat for Humanity has once again collaborated with a number of area bars, cideries, meaderies, breweries and distilleries for the House Beer Built Tour, which features coupons for free beer and cocktails at more than 35 local establishments. You can get free beers from 12 Gates, Pressure Drop, Resurgence, Big Ditch, Flying Bison, Hofbrauhaus and Community Beer Works to name a few, as well as free drinks, cocktails, cider, mead and more. Cards are $42 and can be preordered online.

Two of Western New York’s newest craft beer bottle shops, Larkin’s Magic Bear Beer Cellar and Angola’s BTR Brews, are turning one on December 3. At Magic Bear, the party starts at 4pm and there will be commemorative cookies for the first 50 guests, live music from Nick Spacone (5pm), drink specials and more. And at BTR, the party starts at noon and will feature drink specials, giveaways, live DJ (7pm), food from Yankee BBQ and WBUF onsite to host sampling and Stella Chalice engravings along with 2023 VIP Buffalo on Tap ticket giveaways and other Stella & WYRK/WBUF merchandise.