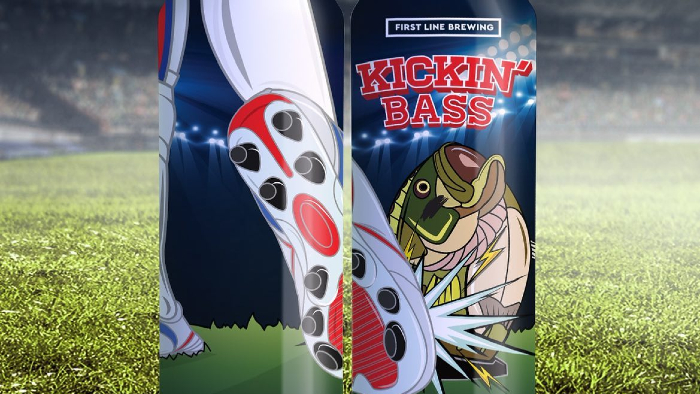 After a successful partnership with Buffalo Bills longsnapper Reid Ferguson, First Line Brewing have teamed up with Bills star kicker Tyler Bass on Kickin’ Bass Session IPA, brewed with all Citra hops. The beer will be released on December 22 at the brewery and then wherever great beer is sold. A portion of proceeds will go towards P.U.N.T. Pediatric Cancer, which provides WNY families facing pediatric cancer financial, practical and emotional support.

Big Ditch has announced plans to open a new production facility at 101 Oak Street. The new facility will have more than twice the production capacity of the current brewery, including a 40-barrel brewhouse and 10 x 80-barrel fermenters. It is anticipated that the new facility will begin producing beer by next spring. The existing taproom at 55 East Huron Street will be unaffected and plans for the Transit Road location are moving forward.

Big Ditch is dropping a pair of new beers on December 17 (11am), their final can release of the year. Panic Buying Double Dry-Hopped Double IPA is brewed and double dry-hopped with Mosaic, Cashmere and Meridian hops for notes of citrus, pineapple, berry and dank earthy aromas and flavors, and Beer That Tastes Like Beer: Scotch Ale features rich, caramel, a touch of roast and orange peel. Both beers will be available on draft and in 16oz. cans.

The Seltzery & Social by Twin Petrels Seltzer Co. has announced plans to move into former Resurgence Brewing site on Niagara Street. The project, helmed by Katrina Piechowicz, will feature craft seltzers and craft cocktails. The space will include 20 taps with seltzers and local beers with seating for 100-plus inside. The exterior will include an outdoor Seltzer Garden with firepit and shaded areas. Opening is expected in summer.

With their latest release, Thin Man is keeping it crispy and creepy with Creep in The Cellar, a pale kellerbier inspired by a beer at Brauhaus Calwer-Eck in Stuttgart, Germany. This naturally unfiltered lager is crisp and features lightly bready malts and lemon and herbal notes from the German noble hop. Creep in the Cellar will be available at all locations.

On December 18, 42 North will release Stones Throw Barrel-Aged Blonde Ale, a barrel-aged blonde ale conditioned on peaches with a touch of vanilla and aged for over 9 months in oak barrels. They also recently released Life’s A Barrel Of Cherries Dark Sweet Cherry & Cranberry Barrel-Aged Gose. Aged for 9 months in French Oak Chardonnay Barrels and fermented on dark sweet cherries, cranberries with a touch of vanilla. Both are available in cans.