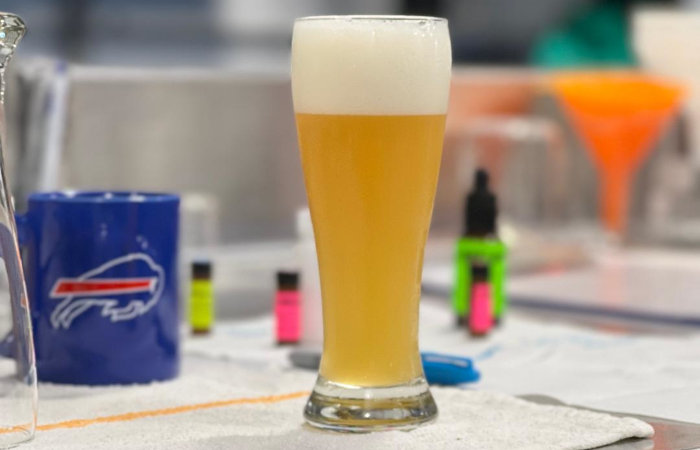 Hofbrauhaus Buffalo will tap their Hopfen Weizen on June 3 (7pm). If you’re new to this style, expect a hazy beer with a thick white head, super fruity and tropical aromas, slight pithy orange / pineapple juice taste and clean bitterness on the end. Hopfen Weizen pairs best with Hofbrauhaus’Grosse Bayerische Salatplatte and Currywurst, or by itself in the biergarten. All guests will receive a free 0.3L of Hopfen Weizen once it is tapped and 10% of sales for the evening will be donated to Pride Center of WNY. For reservations, visit hofbrauhausbuffalo.com.

Pressure Drop Brewing will release Lyam’s Lager in honor and memory of Lyam J. Frank, who suffered from Volvulus and needed assistance from Oishei’s Children’s Hospital. This lager is a testament to the work and specialized care the doctors and nurses at Oishei’s provide. A portion of proceeds from the sale of Lyam’s Lager will go to benefit Oishei. It will be released on draft and in cans on June 4 (11am).

CBW and 26 Shirts have once again teamed up, this time on Charge Blackberry Sour, which will benefit Feedmore WNY. Charge is brewed with blackberry puree and butterfly pea flower for sweet and tart berry notes. The first 30 guests to make a purchase from the 26 Shirts Pop-Up Shop at the release on June 2 will receive a free Charge glass. Charge will be available on draft and in 16oz. 4-packs to-go.

Thin Man Brewery will release three beers on June 3, Elettrico Eterno Italian Pils, Temper Tantrum Turtle American Pale Ale and One Lofty Goalsch. Elettrico Eterno, a collaboration with Manlius’ A.W. Wander, is brewed with French pilsner and hopped with German grown Mittelfruh, Spalter and Saphir, Temper Tantrum Turtle features notes of pine and citrus pith, and One Lofty Goalsch, a collaboration with the 11 Day Power Play and Sullivans Brewing, is brewed to benefit Buffalo’s 11 Day Power Play, a charity devoted to fighting cancer. All three will be available at all taprooms.

5. 42 North to Release Kolsch in Honor of East Aurora Advertiser

In honor of the East Aurora Advertiser turning 150-years-old, 42 North Brewing will release Front Page Kolsch, a light, refreshing and crisp 5% ABV beer designed to be enjoyed outside this summer at any number of events. Front Page Kolsch will be available on June 4 (12pm) at the 42 North taproom on draft and in limited edition cans. It will also be available in select East Aurora restaurants and bars this weekend.

Rusty Nickel Brewing is turning seven this weekend and they are celebrating with a party on June 4 (12pm). The event will feature live music, food specials, exclusive beer releases, limited edition merchandise, new product launch and more. For guaranteed seating with views of the bands, guests are encouraged to make a reservation at rustynickelbrewing.com/reservations.

9. Griffon Brewery and Gastropub to Open in Lewiston Thursday

Griffon Brewery & Gastropub will open June 2 at 115 S. Water St. in Lewiston. Of the new space, Griffon says to “expect stunning riverfront views on our large patio as well as indoor dining and lounge seating.” Reservations are encouraged and can be made here – griffongastropub.com/lewiston. Current Griffon locations include Niagara Falls, Lewiston, East Aurora and Clarence. The Niagara Falls and Lewiston locations each have 60 beers on tap; East Aurora has 72 taps and Clarence has 100.