A.B.V. is a Trifecta of Greatness

What can we say about Allen Burger Venture (ABV) that hasn’t been said already? The new gastropub is a collaboration among chef Dino DeBell, craft beer enthusiast Mike Shatzel, and professional rock musician Johny Chow and the triangulation of those three things – food, beer, and music – is what brings people though the doors of ABV. There’s been a lot of buzz surrounding one of Allentown’s latest openings, and if you’ve ever seen the crowds of people who flock here on a daily basis, it’s obvious that it’s for a good reason.

These guys specialize in three of the things we (and most people –see above for crowd description) cherish most: food, beer, and atmosphere. But ABV goes above and beyond when it comes to each one, and it makes all the difference. Their burgers are as big in creativity and flavor as they are in size, and one step in the place and you’re surrounded by great music in quite possibly one of the coolest spaces in the Queen City. And the drinks? With 24 craft beers, including one made especially for them by Community Beer Works called ABV IPA, wine on tap, and a range of canned craft brews beer lovers have only dreamed of, Allen Burger Venture hits a home run and tops our Must Try list. 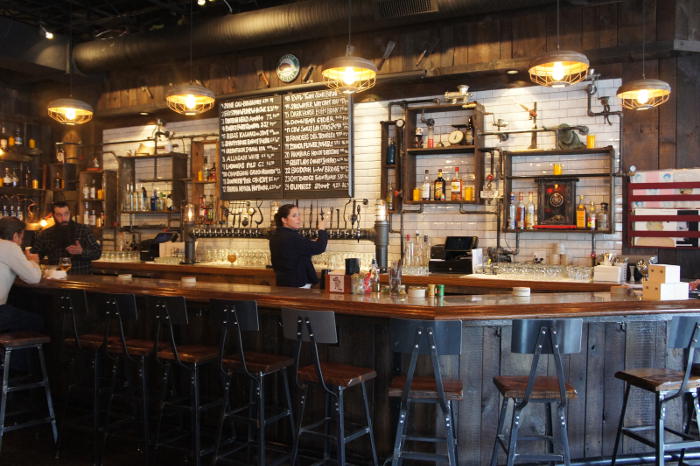 Burgers, beer, and bourbon, oh my! Being that ABV is a gastropub the food menu is smaller than most, and better executed. There’s their “regular” burger, numerically titled starting at One and going down to Nines which includes everything from the Four made with all-american cheese, shredded lettuce, tomato, onion, pickle, & triple d sauce ($13) to the Five made with “Jiffy” peanut butter, pickled jalapenos, applewood bacon, & white cheddar ($15). You can also expect to see lots of creative options on the Alternative burger section like a Tuna Tataki Burger with marinated tomato & green bean salad, avocado, radishes, & feta ($17) and occasional specials like an ABV Bison Burger grilled with Manchego cheese, Romesco sauce, & tobacco onions on top of garlic mashed potatoes ($15), their Stuffed Banana Pepper Burger grilled with garlic sautéed dandelion greens & a hot banana pepper stuffed with ricotta cheese fondue ($16), and their Passage to Bangkok, which is a wild boar Bahn Mi burger with Hoisen BBQ, Cucumber Diakon, Radish Cilantro, Mint Salad, & Siracha Aioli ($19). Seriously. Their sides and shared plates include the likes of Poutine with foie gravy & cheese curds ($14) and Olde English 800 Beer-Battered Onion Rings with Buttermilk ranch ($8) among a few delicious others.

The beers-on-tap menu is constantly rotating, and depending on what you get (canned, bottled, or tap) it’ll run between $5-8. They honestly carry anything and everything anyone who even remotely likes beer could want here, and the tap policy is ‘once we’re out, we’re out!’. So go and go often. As for the canned beers you can expect to find lots of variety here, from Abita to Firestone to Ballast Point to PBR to Dale’s Pale Ale to Oberon. And that’s just what we can recall. If you ride your bike here you can park it in the “Bike Valet” for $6 and in return get a free canned beer token and have a safe bike. Score. They also have wine on tap here, so if beer isn’t your most favorite of drinks or you just want to feel fancy have no fear. If you’re unsure of your decision making abilities (hey, it happens) have a talk with your server or the bartender – they seem to be experts on the practice of serving up just what the doctor ordered. 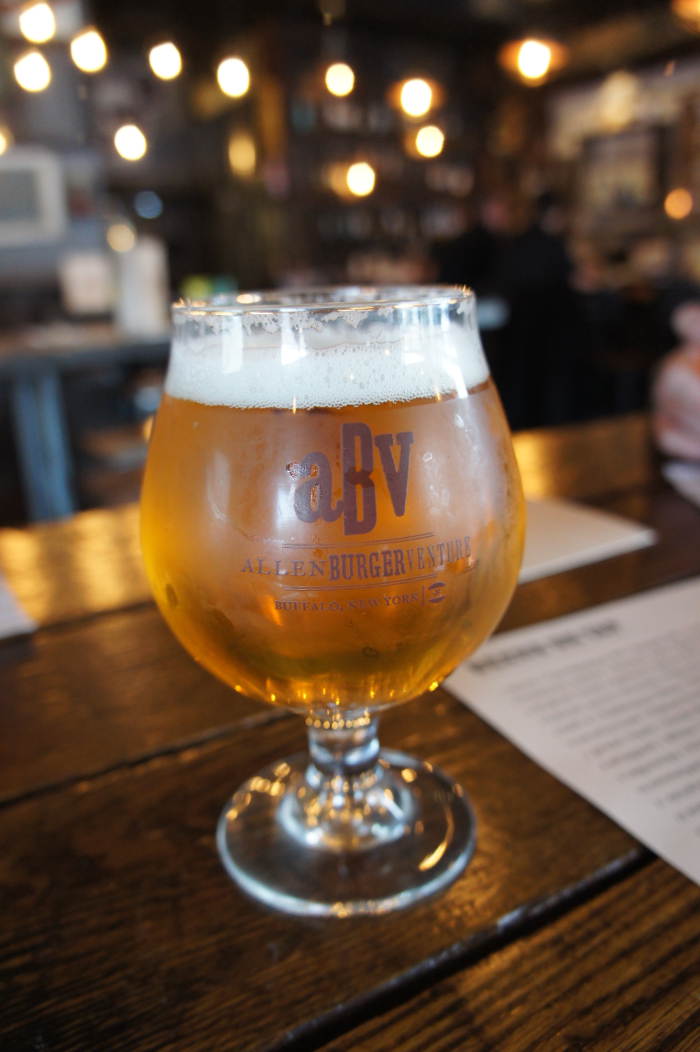 We’ve actually been here a couple of times, so there isn’t just one story to share. Coming in for dinner the place is generally packed, so we put our name in and eventually managed to grab a couple seats at the bar. Pro tip: if you ever go anywhere that’s crowded…go to the bar. Go directly to the bar. Do not pass go. Do not collect $200. Because spoiler alert – the bar is where all the booze is AND you can eat there without the wait. Done and done. And since each time we came it was pretty crowded, the bar seating was our saving grace. After sitting at the bar (both times) we realized that ABV, bless their hearts, had one of my favorite hard ciders of all time – Downeast Cider – on tap ($6.50), which ended up being our drink of choice each night.

RELATED: The Coolest Street Art in the Queen City

For appetizers we tried the ABV Tater Tots made with Applewood bacon, scallion sour cream, & cider apple sauce ($7) and the Truffle Fries with parmesan & garlic aioli ($7). Both were good, but between you and me I liked the Truffle Fries the best. There’s just something about Truffle Fries that makes them always taste amazing, sorry ‘bout it. Then it was time for the main course. The burgers are actually so big at ABV that we split one between the two of us each time we went. And frankly, after consuming a couple drinks and an appetizer each time this turned out to be a really smart decision that left us comfortably full and not hating ourselves. We had the Three, which is comprised of caramelized “ommegang” onions, applewood bacon, & porter cheddar ($16) and the Salmon B.L.T. Burger, which is comprised of applewood bacon, lettuce, tomato, & avocado aioli on a brioche roll ($13). Unlike the appetizers, if you asked me which was my favorite between the two burgers I honestly couldn’t tell you. The flavors in each one were out of this world so it would just depend on what you were in the mood for, plain and simple. 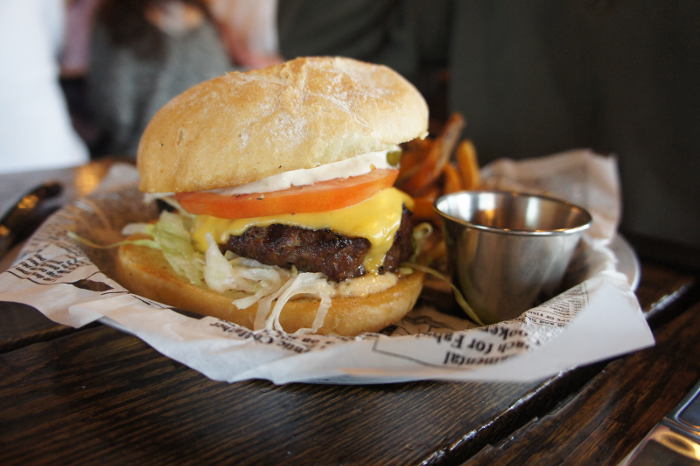 Other SOB visits to ABV included the Five Jiffy Burger topped with peanut butter and other odd stuff ($14) which was weirdly amazing, the One with melt-in-your-mouth forest mushroom and Cambozola cheese with brandy peppercorn sauce ($16) and the most classic of all the Four ($13). All were outstanding and impossible to forget.

We’ve said it before but you really can’t go wrong here so honestly, try it all. Allen Burger Venture knows what it’s doing and does it extremely well, which is exactly why it made our 20 Essential Restaurants to Try This Summer list. If you haven’t been here yet (and even if you have…look at us we’re ABV addicts), there’s no time like the present to knock it and/or a new menu item off your #SOBFoodBucketList. Next time I go I’m going to conquer the Five…because nothing screams bucket list like peanut butter and bacon on a cheeseburger.

Lauren is the Creative Marketing Director at Step Out Buffalo aka the person who posts all those memes on social. A lover of Buffalo, food, travel, and animals, she can usually be found trying different local restaurants while planning her next adventure and asking passersby if she can pet their dog. Follow her dog-petting adventures on Instagram @laurenspoth
Find More ➭ Allentown, Downtown, Lunch
×