For as long as I can remember, Encore has offered unlimited sushi on Tuesday nights. They opened with steak and sushi in mind, and here they are years later still doing the sushi thing. If you thought sushi was an Encore afterthought like I used to, think again.

The all-you-can-eat menu is available from 5-10pm on Tuesdays for $20.95 per person. At first, it seems a little curious if you know Encore as the trendy night club/bar frequented by “youngsters” of which I suppose I am probably one. And while the space is best known for after hours entertainment, it has a lot going for it – multiple fireplaces, a unique building with vaulted ceilings, beams and exposed brick and a quirky approach to name a few.

The key here is not to take yourself or Encore too seriously. The sushi is good. Is it the most authentic sushi in Buffalo? No. Is it interesting and tasty? Absolutely. Is unlimited sushi fun, filling and a unique option in WNY? You betcha. That’s why we think you should go experience it for yourself. On top of delicious sushi, the service is attentive, the atmosphere oddly soothing and the price right. Something else you might want to know right about now – Encore has a spacious patio out back calling your name.

On Tuesday nights at Encore you’re presented with a special menu for unlimited sushi. It’s switched up a bit from their standard menu (understandably), but I’m here to tell you it’s still a great list. The night we visited, it included over 18 rolls – some maki rolls, majority deluxe rolls from the regular sushi menu and some added specials. A few that stood out were Tuna Tartar Jr. with spicy tuna, tempura shrimp, cucumber, peppers and citrus-soy sauce, Blue Crab with cucumber, blue crab and crunch, and Don Jr. with shrimp tempura, broiled eel and avocado, eel sauce and spicy mayo.

At no point did I feel like I was being cheated out of good options for my twenty bucks. In fact, I was impressed with what the menu offered. Maybe it’s just me, but I was impressed in general with Encore’s unlimited sushi night. 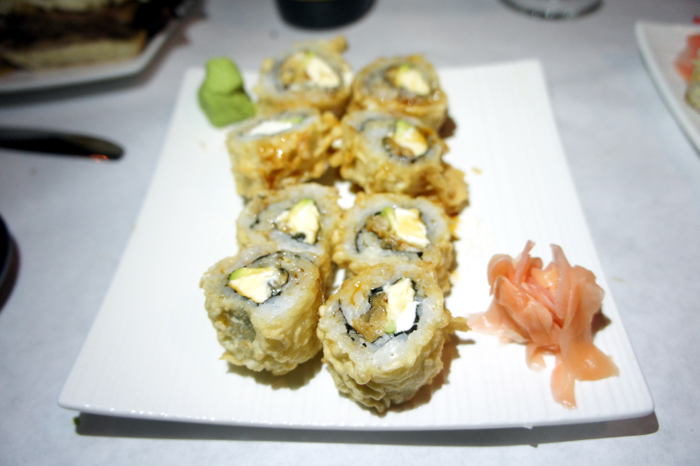 The Rest of the Story

Here’s the deal. If you opt for unlimited sushi, there are a few simple guidelines to follow. You can order two rolls at a time the first two times you order. After that, you can only order one roll at a time. You can place your next order once you’ve received your last order. As I’m sure you’d agree, this makes complete sense to ensure that the sushi bar doesn’t get too backed up. The timing worked wonderfully throughout the night. The place wasn’t too crowded, which leads me to believe most people don’t know about the hidden gem that is unlimited sushi night.

Unfortunately, the exact names of each roll we got are a bit fuzzy (I blame the sushi coma). We ordered five and loved all of them. Some are easily found at other sushi places around town, some are unique with an Encore spin to them, and probably none are considered authentic. We know for sure we got…

My go-to roll. (Isn’t it everyone’s?) I don’t care if it’s not authentic, it’s freakin good. This one was on par with others I’ve had in WNY. One thing that set it apart was the whole piece of raw tuna in it.

Very good, rolled in crunchies, a little light on the inside contents.

This one came recommended by our server. I was hesitant at first because I didn’t think I liked cream cheese in my sushi, but I was wrong. This came out warm, with a battered outside layer and creamy insides. I could eat this all day.

Another roll we tried had crispy onions on top which turned out to be delicious, if not a perfect fit for an Asian food craving. The fifth roll has no chance of being named. I wasn’t even drinking, I swear.

As far as price goes, you can’t beat unlimited sushi for $20.95. If you order just two rolls, you’re likely saving some money. Three, good to go. Five like me, forget about it. Truth be told, my companion helped me out a bit. Our server was nice enough to even give him his own pair of chopsticks. That being said, he did order a full meal for himself as well. It’s not like he was just freeloading off my unlimited rolls. Honestly, I’m not really sure if they have rules about that stuff, but I’m certain if you go spend twenty bucks per person, you won’t be disappointed in the amount of food you get.

If you’re trying to compare your sushi preferences to mine, (which is what I’d be doing if I were you) I’m picky but not TOO picky. I love Seabar, I liked what I had the one time I’ve been to Kunis but am partial to the bells and whistles when it comes to sushi (gasp) and I really like Ichiban near the McKinley Mall. Oh – and I love the sushi at Sun Restaurant as well. There, now you know my deepest, darkest secrets.

Question: Are you in love with the all-you-can-eat sushi night or against it?

Emily is co-founder and Director of Storytelling at Step Out Buffalo. Her favorite things to do are eat, travel, and think up business ideas. Emily is originally from Hamburg, NY and her out of town friends will tell you that she loves to talk about Buffalo any chance she gets.
Find More ➭ Downtown, Theater District