In the past five years we’ve seen seriously good, authentic Mexican food pop up in multiple locations throughout Western New York. As a region we’ve been graced with a poutine specialty shop, more than one Ethiopian restaurant, truly delicious Vietnamese food, and most recently Cuban has joined the list of cuisines we’ve been missing and now have at our fingertips.
And then there was one. One cuisine that was embarrassingly lacking in Western New York – Spanish food, authentic or not.
We couldn’t be more thrilled to announce that the wait is over as Aro Bar de Tapas opens at 5415 Sheridan Drive in Williamsville this week serving Spanish cuisine. And yes, authentic is the perfect word to describe it. And no, it is nothing like Latin American cuisine.
Why should you be head-over-heals excited about this opening? Spanish food is arguably the best cuisine on the planet. Due largely to their geographic place on the globe, or maybe their inability to fight, Spain has been conquered countless times. With each butt kick their food influences grew and their cuisine got better. Stir in a large dash of creativity and you have something to cheer about.

Aro Bar de Tapas is the brain child of Jeremy Horwitz and his wife Christina, Chef Scott Kollig, and Pastry Chef Monica Kollig. The double husband and wife team have a colorful background full of business and culinary expertise. Jeremy has had a storied past in entrepreneurship, writing, and publishing among other things. The Horwitz’s bring a strong sense of design and detail to the team which is evident in the new brand they’ve created with Aro.
Chefs Scott Kollig, originally from Clarence, NY has spent recent years working at leading restaurants like José Andrés’ Minibar by José Andrés, Wylie Dufresne’s WD-50, and Michael Mina’s Wit & Wisdom in Washington DC, New York, and Baltimore respectively. Chef Monica Kollig has a similarly accomplished history working with Chefs like Daniel Boulud at Café Boulud, Patrick O’Connell at The Inn at Little Washington, Bryan Voltaggio at Aggio, and Cindy Wolf at Cinghiale. About two years ago the foursome worked to bring a world-class Spanish market, Mercado, to WNY. As they eventually were unable to make the scope of the original plan work, Aro was born.
We were recently treated to a delicious meal during a preview event on the first night of service at Aro. The space was transformed from a Hallmark Card Shop and Sprint retail location to Spanish tapas bar, and no important detail was left untouched. The restaurant and bar is cozy and inviting with no more than 25 tables, adorning Spanish touches like dark wood and rustic materials. Photos of the cities that inspired this adventure (Barcelona, San Sebastian) decorate the walls, and throw pillows are nestled along church pews re-purposed as benches. While there are many themes throughout the restaurant that provoke excitement, the most common thread is attention to detail.
The food menu at Aro is set up to resemble a traditional (and when I say traditional I don’t exactly mean traditional because most restaurants in Spain run along an extreme spectrum of traditional to contemporary/traditional) menu at a Spanish restaurant where the plates come in various sizes and you’ll really never know how much food you’re getting until you in fact get it. It’s part of the fun, really. Just remember, you can always order more and you can always, always take some home.
At Aro, Jeremy, Scott, and team have done their best to make the menu as un-intimidating as possible, which is why you’ll find a Large Plates section offering more substantial while still authentic Spanish dishes next to small and medium plates, as well as plates of jamon y queso.
Throughout the menu you’ll find Spanish classics mixed with updated dishes with a chef twist. When it comes to food, Spain is all about taking what’s good and putting personal touches on it. For example, you’ll find patatas bravas at almost every restaurant in town, but not once will you find it made exactly the same way. Often times it varies greatly from one tapas bar to the next.

Aro is no different in that Chefs Scott and Monica have approached each dish as a personal work of art. In a recent conversation, Jeremy explained that the team has worked hard to interpret each Spanish classic in a way that will be received both as authentic and approachable for newcomers to the cuisine.
But enough about that, let’s get to the good stuff shall we? What you have to look forward to is a long list of Spanish delicacies including imported world class meats like multiple versions of the world’s undisputed best ham Jamón Ibérico de Bellota (for the first time at any local restaurant – to that we say halleluja), Patatas Bravas, Tortilla Española, Pan con Tomate, Gambas al Ajillo, Croquetas, Arroz con Pollo, and more. 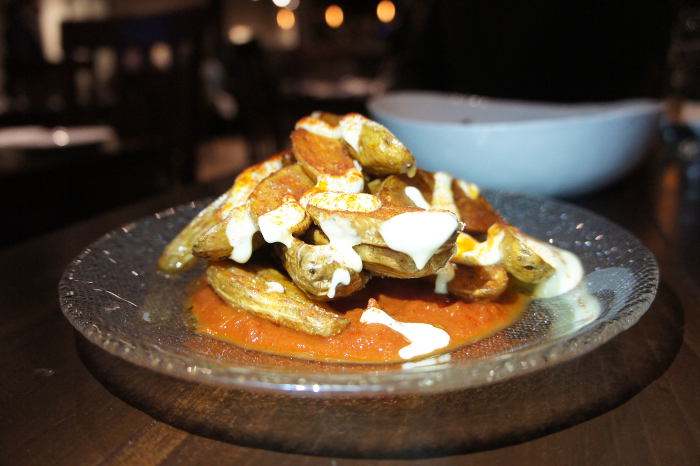 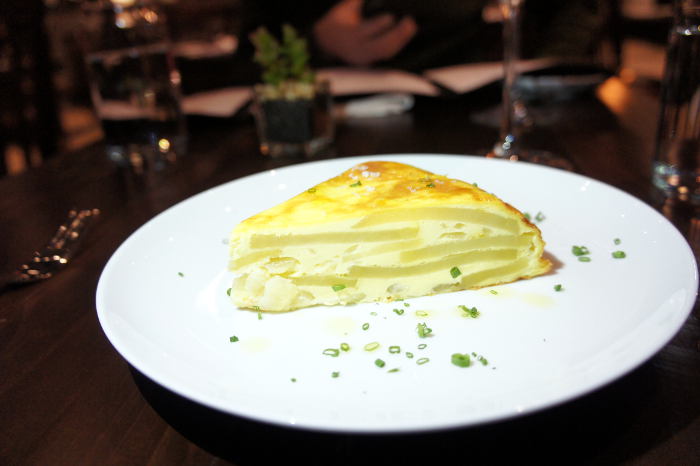 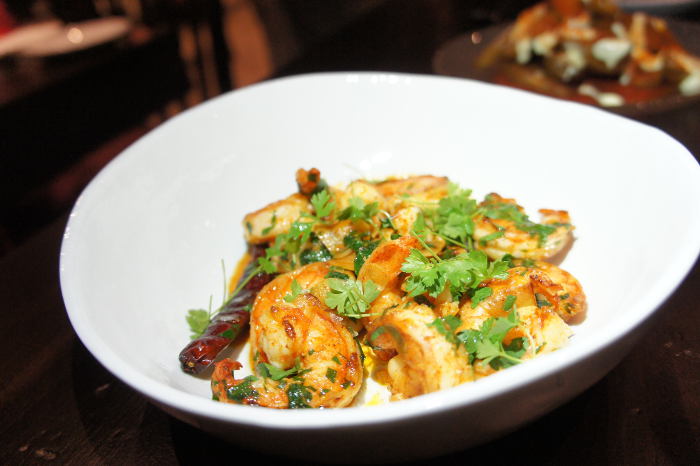 In addition to all that, plus so much more Spain inspired deliciousness by way of food, the Aro team has done extensive research to bring us a Gintonic program like WNY has never seen before. Upon opening, the tapas bar is stocked with 80 gins and the gintonic menu consists of five variations ($10-$15) using gin brands both local and otherwise. Aro’s long term goal is to offer a gintonic combination for each gin they stock.
What makes the gintonics you’ll drink at Aro so different from most others you’ve had? Two words, dry ice – which is said to enhance the flavor elements of the cocktail while simultaneously providing entertainment. We tried both Aro de Oro with Uncle Val’s botanical gin, grains of paradise, and Fentimans tonic ($14) and the Ultimo with Hendrick’s gin, cucumber, rose petal, and Fever Tree Indian tonic ($15). The two were very different in flavor but equally delicious, even for the “non-gin and tonic drinker” at the table.
The tapas bar, which does in fact have a large bar running the length of the restaurant, also offers a long list of cocktails, red and white wines by the glass and bottle, cava, sherries, vermouths, and a list of 8 beers.

As if the cuisine, gintonic program, and attention to detail isn’t enough, Aro has a bangin’ dessert program. Simply put, dessert hasn’t had a moment like this in Western New York, maybe ever. In my humble opinion, the incorporation of Pastry Chef Monica Kollig into the experience is one of the most exciting parts of Aro. We’ve seen the beginning of our food moment, our beer moment, our cocktail moment. Here, to my thinking, is our pastry moment, where every single dessert dish is created on the spot with thought and precision.
While the existence of a full time pastry chef is alone enough to excite, the depth of flavor and intricate presentation back up any hesitation one might have about the program living up to expectations. The execution was near flawless even before day one, and the intent, which trumps all in my book, is there. Get excited Buffalo. This is a mighty step in the right direction. 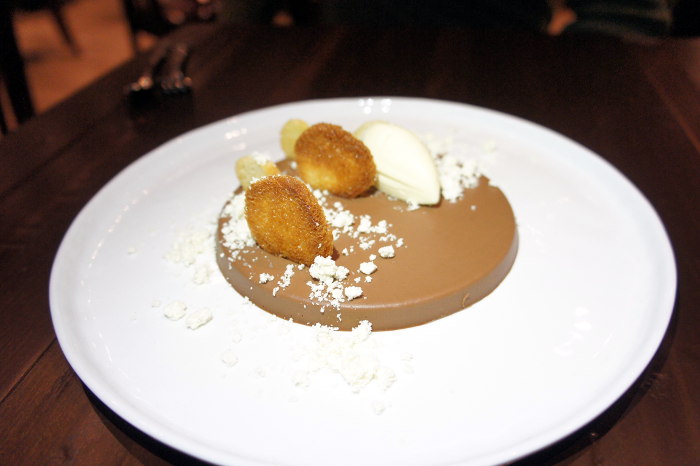 On our recent visit we tried Aro’s interpretation of Pan con Chocolate, a classic Spanish dessert with semisweet chocolate ganache, house made olive oil ice cream, and caramelized brioche and Crema Catalana with caramel cream, salted marcona almond crumble, pomegranate, and crystalized violet. The menu ranges from these rich dishes to Basque Cake, Churros, and housemade ice creams and sorbets.
If you’re ready for an exciting culinary experience through Spanish cuisine, talented chefs, intelligent service, and attention to detail, a visit to Aro in your near future is an absolute must.
For more info on Aro, read our past coverage, visit their website, and follow them on Facebook, Instagram, and Twitter. Upon opening, Aro is open for dinner, Tuesday through Sunday. They will be opening for lunch and brunch in the near future.

Rendering courtesy of Tappo Day Club You guys! We're so excited for this new day club coming to Chandler Street in Black Rock, complete with a pool and lounge area, restaurant with rooftop dining, bar, bungalows and more. According to their recent social media post...

Rosie’s Handcrafted Ice Cream / Photo x Brett Llenos Smith Now, that Grandpa, Grandma, Pee Pop, Grammie, Mommy, Daddy, Auntie and even your weird Gen X uncle who always tells you about The Continental “back in the day” can all get their COVID shots – it’s time to get...