There are two kinds of people in the world, those who love brunch, and those who are wrong. Lucky for you, we’re the former. And we’re making it our mission during this upcoming chilly season to bring you recommendations for the best of the best brunches Western New York has to offer.

Which brings us to Bagels and Brooze, a Saturday brunch party (if you will) hosted by two relatively new local businesses, Hydraulic Hearth (Restaurant and Bar, the where) and BreadHive (West Side Bakery Co-op, the what). The concept, while perhaps complicated for some non-team players to grasp, is pretty simple. Like last year around this time, the BreadHive team take’s over HH’s brick oven during the hours of 11am-3pm on Saturdays starting October 10, 2015 to make bagel sandwiches, featuring none other than their housemade bagels. All brooze (brunch booze) is handled by Hydraulic Hearth, offering a wide variety of “bubbly” and “bloody” beverages.

An uber-relaxed Saturday morning affair. If you’ve been craving a decent bagel sandwich since your college days (seriously, what do we have to do to get more bagel sandwiches in this city) or are good for a fun brunch cocktail or are in need of a day-after-drinking hangout that won’t flip your table like a pancake, this is it. Plus, good food and drink that doesn’t cost and arm and a leg. Get it on your list.

The menu we selected from during multiple visits last season was quite similar to the one they’ll be offering this year with welcome additions like sides of house breakfast sausage, potato hash, and bread pudding, among others. The main event, bagel sandwiches, includes the Uncle Brooklyn which features everyones favorite cream cheese and lox, Caprese with house mozzarella, pesto and marinated tomato, The Cure with the likes of prosciutto, First Light chevre, fig, apple and arugula, a Banh Mi inspired sammie with tofu, and last but not least the ultimate hangover cure, Bloody Harry. (There’s pancetta involved, obviously). 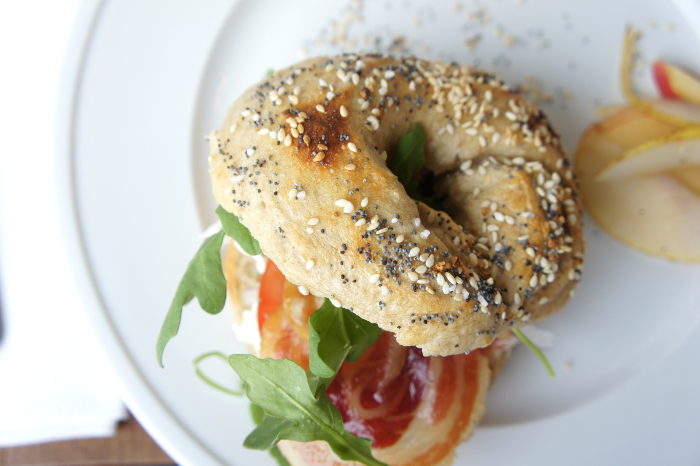 The brooze menu will feature several of the hits from last year like the Bloody Wilbur which swaps bacon bourbon for vodka and a Beermosa made with Ommegang Witte. Plus they have the classic Bloody Marys, mimosas, some other variations, and 4 shots or “starters” to really get you going. The drink menu ranges from $5 – $8.

Our visit to Bagels and Brooze during season one absolutely delighted. The only disappointment around the thing came when it ended last spring to make way for HH’s brunch collab with The Whole Hog in their beautiful beer garden. #tradeoffs

After sitting down and ordering drinks with our part-time server, (they are only there to grab and replenish the brooze) we took our menu/order card back to the BreadHive team working diligently by the brick oven where we ordered and paid. FYI when you order one sandwich, pay for it, eat it and then want another, it’s embarrassing having to go up a second time. So just order two from the start.

The sandwiches are everything you could want in a hangover cure. The bagels are delicious, made only better by the crisp warmth from the wood-fired oven. We tried Bloody Harry ($10), which offers a good looking and even better tasting slice of pancetta, arugula, First Light chevre, red onion, and red pepper spread on an everything bagel.

Next we tried the Uncle Brooklyn ($9), a BreadHive take on the cream cheese and lox brunch classic. It was fresh, creamy and flavorful. Another win.

The Cure ($6), a third option offering prosciutto, First light chevre, fig, apple, and arugula is the sweetest of the bunch, simple, and beautifully paired.

Pretty much anything you get will be a home run. It’s bagel sandwiches and brunch booze people! Go now!

Emily is co-founder and Director of Storytelling at Step Out Buffalo. Her favorite things to do are eat, travel, and think up business ideas. Emily is originally from Hamburg, NY and her out of town friends will tell you that she loves to talk about Buffalo any chance she gets.
Find More ➭ Best Brunch, Downtown, Larkinville
×