Bask in Glow of Brick Oven at Elm Street Bakery 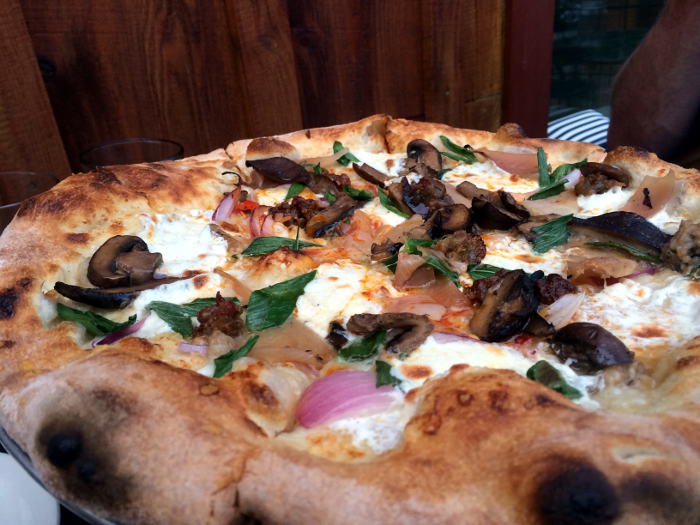 Update: Since posting this, Elm Street Bakery has a new chef, but it’s still awesome and worth a visit! Plus, tons of the info below is still relevant.

It’s hard to pick a favorite spot in East Aurora, but after spending a few minutes surrounded by Elm Street’s friendly staff and comforting aroma, you’ll quickly add ESB to your short list. On top of the bakery & cafe that has made them one of WNY’s most intriguing businesses, Elm Street Bakery is now taking full advantage of their space, talent, and beautiful brick oven. Here’s the (not so) skinny: Bread, baked goods, cafe treats & pizzas have been the back bone of ESB since owners Kim and Jay DePerno opened in 2011. Recently deciding to expand their menu to include a unique dinner/table service featuring wood-fired dishes using their brick oven, they hired up-and-coming Chef Brad Rowell to take on the challenge. We fully covered Chef Brad, his plans for ESB’s new dinner menu, and everything they offer at Elm Street in Part 1. Below, we dig into our first experience(s) eating Chef Brad’s food at ESB. 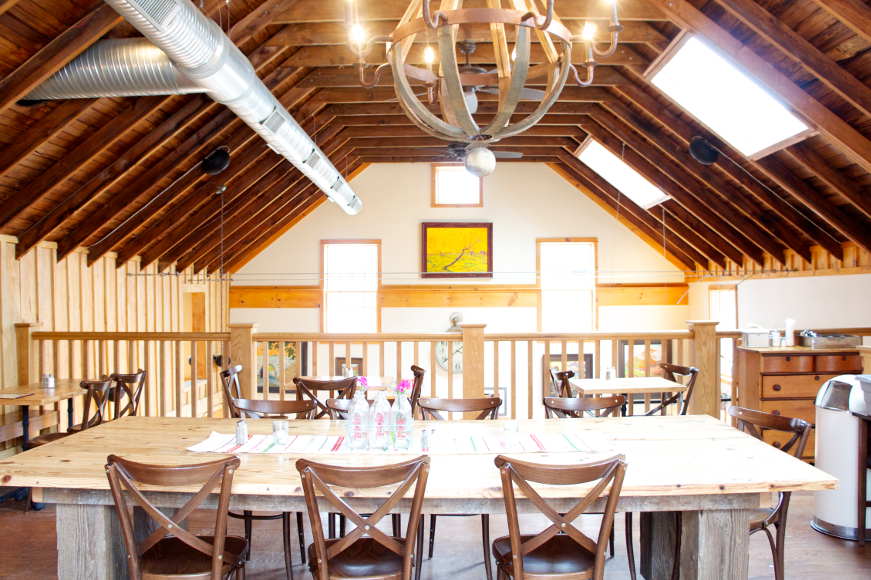 The ambiance, particularly at dusk when we visited the first time, created a soothing experience. Read more about the design & environment in our last piece. As we sat down in front of the brick oven at the low bar, we were quickly greeted by our waitress, ordered beers and took in our surroundings. We watched as food was prepared just beyond the counter, pizzas and more moving in and out of the oven. Sitting at the bar was a treat. Not only did we have first row seats to a great view of the oven and action, but we got to chat with Chef Brad, who in the interest of full disclosure, we have known for a while. I highly recommend sitting near the kitchen area if possible. 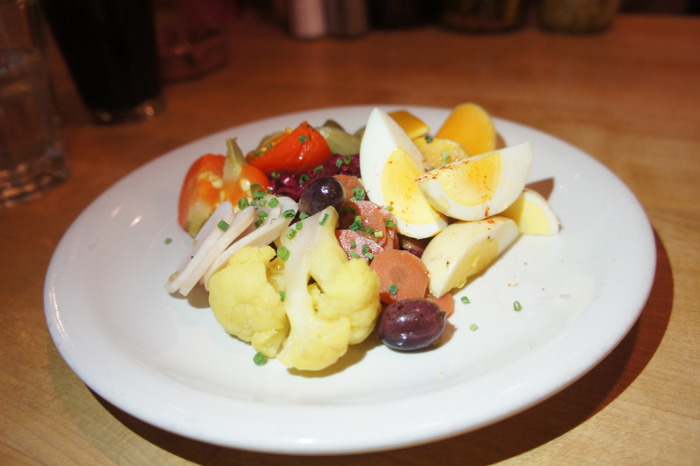 If the setting isn’t enough to make you go gaga, glance at the menu. It’s well thought out, created to spotlight the brick oven and the many quality elements ESB brings to the table – bread, cheese and meat assortments, tartines (French open faced sandwich), small plates, two large plates and pizzas. It’s one of those menus that excites you, come to find out the real thing is even better than on paper. You’ll find small but outstanding touches throughout, such as Brad’s homemade cultured sea salt butter (AMAZING), house made rosemary crackers, and preserved lemon yogurt made using the rinds of citrus being preserved on the bar for all to see. ESB bread, as you can imagine, is one of the not-so-secret weapons used to take dishes to the next level. A perfect example is the (French toasted?) bread for soaking up the broth laced with lentils, herbs, hard cider and creme fraiche in the Wood-Roasted Clams small plate ($11). 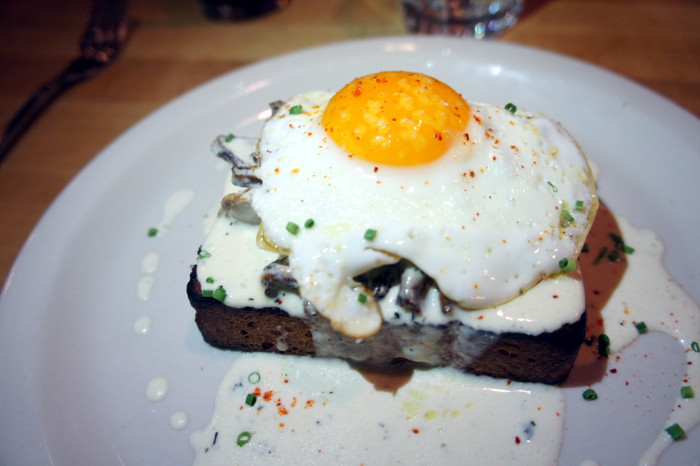 Mac and Cheese / Step Out Buffalo 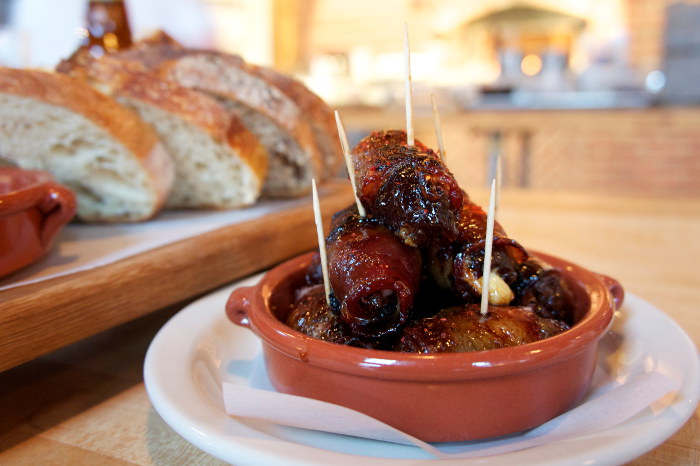 Over two dinners, we were fortunate to taste a good portion of the menu items, some twice. We tried the Bacon Wrapped Dates ($6) with poached apple and blue cheese, served tapas style. This was more than enough for two and really well done – flavors were rich and delicious. Each dish comes out as it’s ready, meant for sharing, no holding food in the kitchen – which seems to make for a smooth kitchen process. I love that restaurants are going with the flow of this concept more and more. Sharing and trying food little by little as the night progresses is fun. We nibbled on the assortment of house made bread and butter ($4) throughout the meal. Like I said, amazing. We all knew the bread was great, accompanied with this fresh butter, it’s really outstanding. The Mac and Cheese from the Wood Oven with cheddar, jack and herb breadcrumbs ($8) was creamy and flavorful with a crunchy top – again, delicious, great flavors. The Wood-Roasted Butternut Squash ($9) with burrata, brown butter, rosemary and walnuts was lovely. The burrata was super fresh and a nice contrast to the warm squash. I could go on and on.

Next we tried both large plates. The Wood-Roasted Half Chicken ($21) with leek bread pudding, parsnips, lemon and herb jus wasn’t all that smokey, but was juicy on the inside, crisp on the outside thanks to the brick oven. The bread pudding was a nice touch and the parsnips were delectable. The Wood-Roasted Rainbow Trout ($23) with farro verde, preserved lemon yogurt and shallot-caper vinaigrette was also very tasty, big portion, perfectly cooked. I really enjoyed the farro verde.

Although we very badly wanted to order dessert, we decided it would have to wait until next next time, as we were completely stuffed full of wood-fired goodness. The Cookies and Milk ($5) – choice of two and a pour of moo being consumed a couple seats down looked mouthwatering and adorable in it’s presentation. I know from previous experience that their cookies are out of this world. Creativity must run in the ESB family.

Bravo to Chef Brad and the Elm Street team. Dinner service is yet another reason to visit the beautiful wood building on Elm.

Emily is co-founder and Director of Storytelling at Step Out Buffalo. Her favorite things to do are eat, travel, and think up business ideas. Emily is originally from Hamburg, NY and her out of town friends will tell you that she loves to talk about Buffalo any chance she gets.
Find More ➭ East Aurora, Southtowns