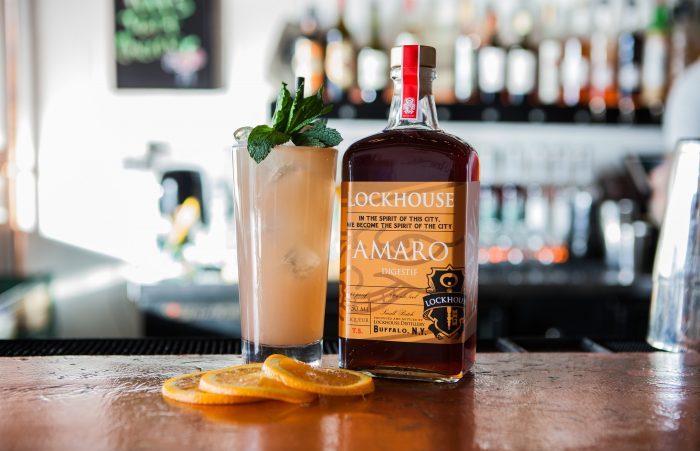 We got a press release from Lockhouse and it’s good. Real good. Keep reading for boozy news.

Product Launch for Locally-Produced Version of the Italian Digestif set for March 31st, 2017.
Lockhouse Distillery & Bar – Buffalo’s first distillery to operate since Prohibition – will be unveiling their Amaro on March 31st, 2017 at 8pm, at their distillery and bar space at 41 Columbia Street in Buffalo’s Historic Cobblestone District. Amaro – a traditional Italian liqueur consumed after meals – has become a staple among discerning American bars for its versatile use in cocktails and as a standalone drink.

Lockhouse Amaro, developed with input from Cobblestone co-resident Tim Stevens of Ballyhoo, opens with hints of orange zest and root beer, is sweetened with turbinado sugar, and is finished on American Sassafras.  The result is a fresh and surprising addition to Lockhouse’s ever-expanding portfolio of innovative takes on traditional spirits.
For March 31st’s release party Tim Stevens will be on hand to serve several cocktails he’s developed specifically to accentuate this spirt, supported by Lockhouse’s excellent bar staff.  Buffalo’s own virtuosic jazz/funk quartet GRAVY will be performing starting at 8pm to properly set the tone. 21+, admission is free.
Lockhouse Amaro will be available at Lockhouse for $30 per bottle, and at bars, restaurants, and liquor stores beginning in April.  Ask for it at your favorite bar in your next cocktail or on its own.

WHO: Lockhouse Distillery.  The management team of Niko Georgiadis, Chad Vosseller, Jon Mirro, Thomas Jablonski, Cory Muscato, and Alex Wenzel will be on hand, in addition to Ballyhoo’s Tim Stevens.
WHAT: Product launch party for Lockhouse Amaro.   Cocktails will be served with the new spirit, and bottles will available for purchase.
WHERE: Lockhouse Distillery & Bar, 41 Columbia Street, Buffalo NY 14204
WHEN: Friday, March 31, 2017 at 8pm.
WHY: To raise awareness of Lockhouse Amaro, and officially launch the product to the public.