The newest beer to hit the shelves in WNY….(and by new I mean today) is 21st Amendment. The 21st Amendment is a restaurant and brewery located in San Francisco, California.  The breweries name refers to the 21st Amendment to the U.S. Constitution, which ended Prohibition.  While not all their beers have made it to the area, a few have and they are pretty damn good! 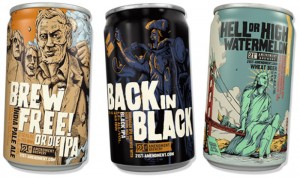 First up is BREW FREE! OR DIE IPA, %7.0. Its brewed with some serious west coast attitude. Its an aromatic golden IPA that starts with a sucker punch of six different hops to the nose but is quickly balanced by a solid malt backbone. It’s also their top selling beer.

Next up is Back in Black, %6.8. It’s thier newest year-round beer available now in six pack cans and on draft. Brewed like an American IPA but with the addition of rich, dark malts, this beer has all the flavor and hop character you expect with a smooth, mellow finish.

And lastly Hell or High Watermelon Wheat, 4.9%. This summer seasonal beer is available from April through September in six pack cans and on draft. They start by brewing a classic American wheat beer, which undergoes a traditional secondary fermentation using fresh watermelon. A straw-colored, refreshing beer with a kiss of watermelon aroma and flavor.  This one sounds good and tastes great if you’re a watermelon fan.
As always these new beers and many other are available at your local Consumer Beverages. Check our website www.consumersbeverages.com for locations and other great stuff. Follow us on Twitter @consumersbeer and on Facebook too.