Brunching in WNY: Wayside Family Restaurant is a Classic Family Diner to Cherish 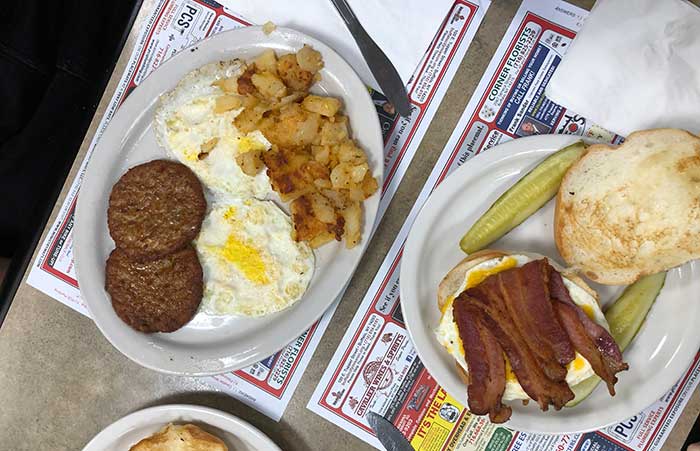 When you search Wayside Family Restaurant on Google or Facebook, one of the first things that pops up is a picture of a waffle with whipped cream smiley face drawn on it. And let’s be honest, nothing really says “family restaurant” like sweet breakfast items adorned with smiley faces. Don’t have the items in the house to make your kids heart-shaped pancakes? Take ‘em to Wayside and let the cooks take over!

Add a menu that includes items such as pizza logs, roasted turkey dinners, liver and onions, BLTs, egg salad sandwiches, and much, much more – and you are at a place that can please an entire family.

Let’s talk atmosphere. It’s the quintessential American diner – gaudy decor, too much glass, too much vinyl, and way overlit. It’s what the average old school Buffalonian family is comfortable with, and these spots aren’t going anywhere even if the hipsters don’t like ‘em. ESPECIALLY because the kitchen is also killing it. Yes, there’s that, too.

On the particular day that we visited Wayside, we just needed the classics. All I wanted was a breakfast sandwich, and Josh was in the mood for a classic breakfast – sausage, eggs, hash browns, toast.

I’m a bacon gal, so I got the bacon and egg sandwich with cheddar. The bacon was thick, the egg was a perfect sandwich egg, the cheese was melty, and the bun was soft with crispy edges. Oh also, they served it with TWO PICKLE SPEARS. Guys, I’m not kidding. What kind of heaven gives you two pickle spears with your breakfast?! I’m not asking any more questions – but let’s owe it to the “family” aspect of the restaurant.

There wasn’t a bit of Josh’s meal that he wasn’t satisfied with – sausage was savory and not too greasy, the hash browns were crispy, and the eggs were exactly as ordered.

There are plenty of family diners in Buffalo, but only some really stick out. It’s no secret as to why Wayside isn’t going anywhere. South Buffalo won’t be done with its brand for quite some time.