In honor of their third anniversary (they grow up so fast don’t they?), Pressure Drop Brewing are holding a special dock sale on November 28 (12pm), behind the Barrel Factory in the Old First Ward, where you can score cans of Death Lettuce, a hazy 7.5% IPA, and Bubble Experience, a fruited sour with blackberry and peach. Each will be sold in 16oz. 4 packs for $16. Additionally, 4-packs of Sticky Trees will be on sale for $10, and mixed 4-packs are available for $18 (day of, no pre-order). Pre-order here. 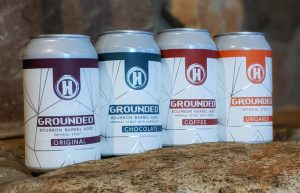 In honor of Black Friday, Hamburg Brewing is bringing back their Bourbon Barrel Aged Ground Imperial Stout, this time in 4-pack 12oz. cans. In addition to the OG Barrel Blend, aged 14 months in bourbon barrels, there will be 3 variants: Unoaked, the original unaged version, Coffee, infused with a dark roast from Finger Lakes Coffee Roasters, and Chocolate, infused with liquid chocolate. All available November 27 (12pm). A gift set with 2 cans of each and branded glassware will be available for $50.
They also canned a fresh batch of their Yule Shoot Your Rye Out Spiced Winter Ale.

12 Gates to Launch the 12 Gates of Christmas December 1

Thin Man Bottles Up the Barrels for Black Friday

In addition to their Liquid Christmas Card Holiday Pack, Flying Bison are welcoming back their MacBison Scotch Ale and Juice Caboose IPA this week on November 25. They are also offering 25%-off cases of bottled beers (mix & match). For more info, click here.