Resurgence Brewing Brings Back Kegs & Eggs for the Fall 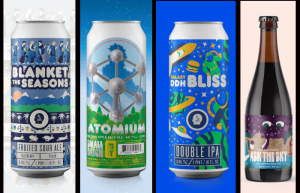 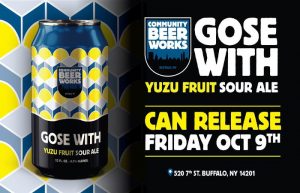 The Gose With… sour series at Community Beer Works continues with Gose With Yuzu Fruit, which will be released on October 9 (3pm). Brewed with Japanese yuzu fruit, coriander, sea salt, and lactose, this fruited gose is refreshingly tart with an abundance of citrus zest. Preorder yours at here. Gose With Yuzu Fruit costs $12.99 for a 12oz. six pack.

Pressure Drop has released the fifth iteration of their Space Monkey IPA series, Episode 5: Space Monkey Strikes Back, in cans and on draft. Episode 5 is an East Coast-meets-West Coast 9.5% Imperial IPA with Simcoe and Mosaic hops, which features notes of dank hops, peach, mango, and overripe stone and tropical fruit. It’s on draft at the brewery and in cans wherever great beer is sold. Pressure Drop has also brought back Dank Sinatra, an IPA brewed with Citra, Simcoe, Mosaic and Azacca hops. Find it on draft at the Barrel Factory. 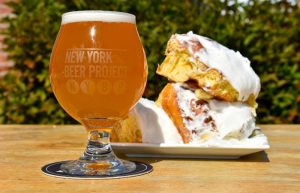 A new cream ale has hit the taps at New York Beer Project, Cinnabon Cream Ale, which features aromas and flavors of a giant cinnamon roll. This beer was brewed with 10 lbs. of cinnamon, and then aged on more cinnamon and Tahitian vanilla beans for flavors of cinnamon and sweet vanilla icing, to go with a bready finish reminiscent of the iconic pastry. Available on draft and for crowler and growler fills to-go.