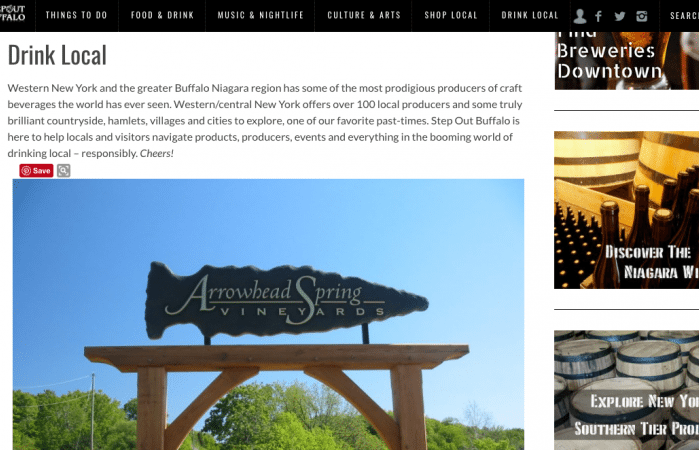 Step Out Buffalo Wants Us All To Drink Local

StepOutBuffalo.com has launched a new Drink Local section, which was created in partnership with Taste NY, an initiative launched by Governor Andrew Cuomo in 2013 to promote New York’s food and beverage industries. This program is designed to increase awareness of local beverage producers in Western New York and give locals and visitors an easy-to-navigate, accessible way to learn more about the region’s’ up-and-coming craft beverage industry. The Drink Local section features business listings for all area craft beverage producers complete with product lists, photos, hours of operation, special event postings and articles on products, staff, techniques, events and the experience of visiting and touring these local craft beverage facilities. Check it out right now at stepoutbuffalo.com/drink-local. 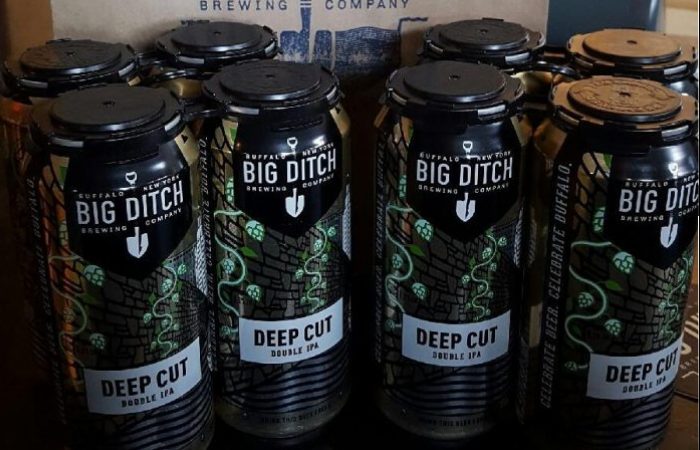 Deep Cut Cans Return For Round 2

Cans of Big Ditch Brewing’s Deep Cut Double IPA went go back on sale on Saturday, March 11 and the brewery is making some changes for round two. Another 75-100 cases will be hitting the sales floor the this weekend on Mar. 18 (11am). Purchase limits have also been lifted for the foreseeable future. Deep Cut will be available in 16 oz. 4-pack cans (for a tasty price of $14.99). And for those that miss out on the cans, Deep Cut will be on tap for pints and growler fills. Big Ditch has also promised that this will not be the last time that they can Deep Cut, with tentative plans for monthly releases.

It certainly looks like the weather is picking up in Strykersville. OK, terrible pun aside, Wyoming County’s Windy Brew, opened by Bill and Michelle Snyder and inspired by Strykersville’s famous wind turbines, have officially opened their doors. The new microbrewery launched with eight beers on tap, English IPA, Snip’s West Coast IPA, Motueka Pale Ale, PTSD IPA, Sheldon Bush Cream Ale, Blondie’s Pale Ale, Red Cream Ale, Betsy’s Best Milk Stout and a pair of ciders, Berry and Raspberry Lime. Windy Brew will also offer a ‘brew your own’ option, which allows customers to choose from a list of beer recipes, take part in brewing the beer and then take some home when it’s completed. Windy Brew is open 4-9pm on Friday, 12-9pm Saturday and 12-6pm on Sundays. Visit windybrews.com for more information. 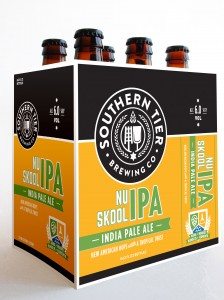 Out with the old and in with the Nu – Skool that is. Southern Tier Brewing’s year-round beer offerings has grown by one with the addition of Nu Skool IPA, an Americanized IPA crammed with 3.5 pounds of experimental hop #07270, Mosaic, Simcoe and Equinox hops per barrel. “We spent over a year prototyping R&D versions of Nu Skool,” Southern Tier says of Nu Skool. “This final version is one special beer. It is an IPA with a slight malty sweetness, but overall balanced & brimming with tropical, fruity, spicy, piney & citrus character.” Pair with smoked meats, shellfish & spicy dishes or shortbread & tropical fruit tarts. Nu Skool can be found in cans (12oz. 6pk) and 12oz Bottles (6pk) as well as on draft. 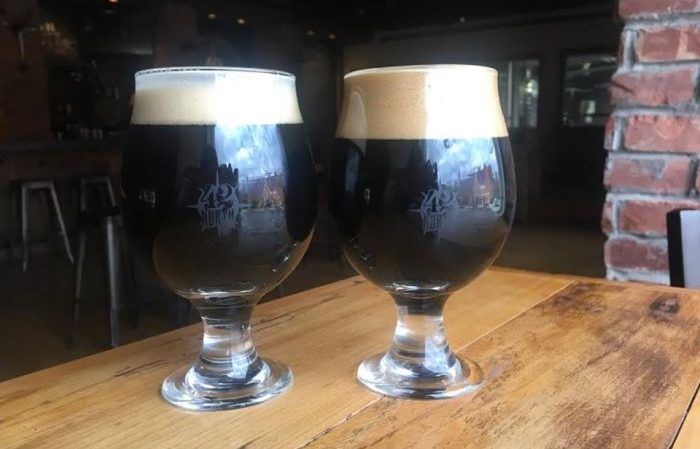 If you’re going to be Irish for a day, then what better place to be than a brewery? And this St. Paddy’s Day, there’s no better place to be than 42 North Brewing, who will be tapping a pair of special beers in honor of the occasion. On March 17, the brewery is releasing a Pilot Batch Dry Irish Stout as well as a Pilot Batch Irish Red Ale, but wait there’s more. 42 North is also tapping a cask of Dry Irish Stout dry-hopped w/ El Dorado hops in the taproom. In addition, a special menu by Root’s Kitchen will feature traditional Irish dishes and live music from Never Ben starts at 7pm. Slainte!

Woodcock Brothers Brewing are upping the bar for the release of the next, not one, but two, iterations of their beloved XPA, as they will release both XPA 10 and 11 on March 24 (12pm). XPA 10 features a blend of Simcoe, Chinook and Centennial hops with Pilsner and White Wheat malt (dry-hopped with Simcoe) and XPA 11 has El Dorado, Lemon Drop and HBC 682 hops, Pilsner, White Wheat, Oats and Caramel malt and was twice dry-hopped with all 3 hops varietals. Woodcock is also planning to have special conditioned versions of each on cask (tentatively one version with mango and another with scotch bonnet peppers). There will be a limit 3 4-packs per person of each version – 1 case total. Limited amounts of both XPAs will be distributed throughout WNY. 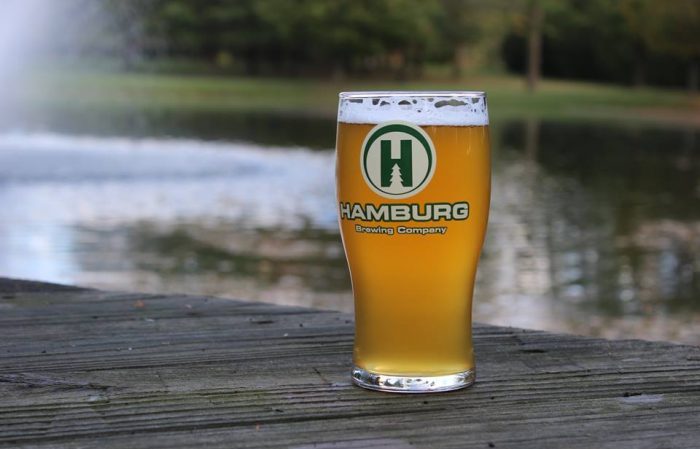 A pair of new hoppy brews have hit the taps at Hamburg Brewing Company. The first is Single Hop, an American Pale Ale, which clocks in at an approachable 5.6% ABV and features hints of key lime on both the palette and the nose thanks to experimental X331 hops and the second is Tax Relief IPA (6.2% ABV), made with four types of malts and Simcoe and Mosaic hops, which gives the beer notes of citrus and pine. And for those that dig the hoppy stuff, Hamburg also currently has Gary’s Wild Hops Pale Ale, Oat Is the New Hop Pale Ale, Tart IPA, flagship IPA and Hoppenstance Double IPA on tap. Flights anyone? 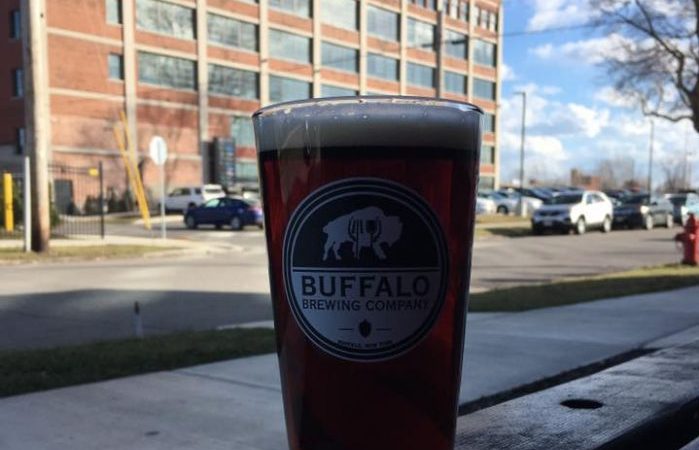 Just in time for St. Patrick’s Day, Buffalo Brewing Company has released their 1841 Irish Red (6% ABV), made with Irish malt and British hops. “We are very excited about 1841 Irish Red Ale! Especially because we’re using malt from Ireland and hops from Britain,” Buffalo Brewing Company says of their new Irish Red. The Larkin brewery is offering pints of the new brew for $4 and crowlers for $8 (3/$20 crowler special, 1841 only) this weekend for St. Patrick’s Day (additional crowler specials – 3/$22 of all other beer and 3/$25 IPA). Buffalo Brewing is open at 11am both Saturday and Sunday for all of your drinking needs.