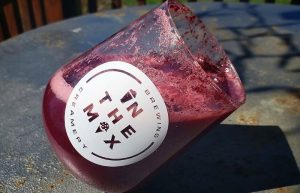 In the Mix Brewing & Creamery Schedules Release of Anniversary Beers

While they couldn’t be open officially to celebrate their first anniversary (April 5), In the Mix Brewing & Creamery will release their scheduled anniversary beers on April 24. Beers include: Spanish Meadows, a gin barrel-aged Saison conditioned on Spanish saffron acacia honey, saffron and spices, Supernova, a rum barrel-aged maple candied pecan stout, Illemonati Peach Mango Ginger Lemonade Sour and Pistachio Delight Cream ale, brewed with pistachio, pineapple puree and marshmallows. Buy them all with the Anniversary Package: 1 crowler of each and an In the Mix glass for $50. Ordering will open up on their website starting April 20. 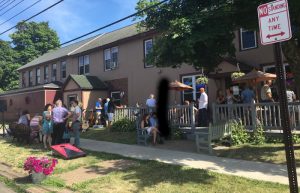 Plans for a new cidery and tasting room to be housed in the former J&M West End Inn, located at 340 Union Street in the Village of Hamburg, have been approved by the Village Board. Owner Pat O’Brien is working with Lenny Scilek, owner and operator of MackJac Hard Cider in East Aurora, on the new project, with tentative plans calling for the construction of a 2,720-square-foot multi-level cider manufacturing operation in the rear of the property, including the installation of up to four tanks. O’Brien will also operate a seven-room Airbnb, set to be housed on the second floor. 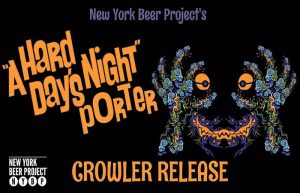 It has certainly been a hard day’s night and New York Beer Project is rewarding everyone with Hard Day’s Night Robust Porter, which features toasty malt, roasted coffee and dark chocolate. The beer will be released in crowlers on April 16 (11am). As a bonus, crowlers will be half priced. The brewery also helped to ‘Complete a Room with Care’ in the Newborn Intensive Care Unit at Oishei Children’s Hospital through their years-long partnership and donations from sales of Perry’s Ice Cream-inspired beers. The campaign makes it possible for every patient room in the hospital to be a private room. 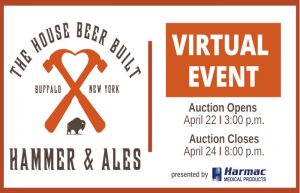 Hammer & Ales, Habitat for Humanity’s signature fundraising event, will take place virtually this year due to the coronavirus pandemic. The online auction runs April 22 (3pm) through April 24 (8pm), featuring prizes like a brewery experience with Woodcock Brothers Brewing and Midnight Run Cellars, an Axe Throwing Package with Hatchets & Hops, overnight stay at the Mansion on Delaware and more. This event is a part of The House Beer Built, a campaign through which Habitat Buffalo and the craft beer community raise money to build a house. Complete list of prizes and more information can be found here.