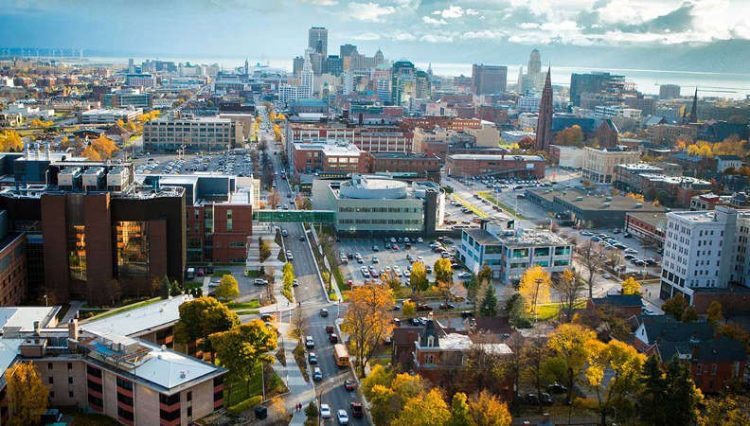 “Their sources of energy production are stable, they have cooler climates and they have access to plenty of fresh water”

That’s just three of the many reasons Harvard University climate adaptation expert, Jesse Keenan, says Buffalo, NY is one of the top two cities that he believes has the best chance for being a safe haven from the climate crisis. “They also have less vulnerability to forest fires, as compared to somewhere like the Pacific north-west. They also have a legacy of excess infrastructural capacity that allows them to diversify their economy in the future. Land prices are cheap and they have a relatively well-educated and skilled labor force.”

In an article from The Guardian titled ‘Where should you move to save yourself from climate change?’, scientists and climate experts discuss both the best (least vulnerable) and worst (most vulnerable) places to live in the US. Natural disasters and rising sea levels make the coasts, southern states, and areas prone to wildfires more vulnerable, while “areas towards the north and away from the ocean and that central corridor where you get tornadoes probably look best”.

Buffalo is situated “in a ‘band roughly above the 42nd parallel’ – a line of latitude that divides New York and Pennsylvania and forms the southern borders of Oregon and Idaho.” Historically speaking, cities and towns located above this band have been relatively disaster-free, save for a few nasty snow storms.

Something else Buffalo has on its side? Good ol’ Lake Erie. “Places close to a reliable source of water without being flood-prone as the seas rise are attractive, such as areas near the Great Lakes and the Pacific north-west.”

As hurricanes, wild fires, floods, and other natural disasters increase in frequency and destruction, more people are actively looking for safe places to live. Luckily, we have all been #blessed to call Buffalo our home.

Read more about Buffalo’s location perks and the climate crisis from The Guardian here.