Buffalo’s Rebirth: Make it So at Black Swan

Known for its massive patio and Cinco de Mayo parties, Cozumel was that place you brought old college friends when they came back into town to reminisce about all-you-can-drink specials and trips up to Clifton Hill.

But now – Cozumel has been reborn as Black Swan Lounge, and while you may not hear Jimmy Buffet blasting at 153 Elmwood on May 5th this year – it’s still a great place to bring old college friends. If only to show off how far Buffalo has come.

Newlywed owners Monique Fortunato-Lester and Bryan Lester have a grand vision for the lounge. Citing influences from New York City to Paris, the couple decided to forego the exposed brick and speakeasy style popping up around Buffalo these days.

Instead, the young couple devised a modern, even futuristic concept for Black Swan. In fact, the vibe of the chic, classic lounge bears many subtle references to science fiction. Both Bryan and Monique are big fans of the genre and it’s evident in the many little touches around the restaurant, from the overall décor to artist Craig LaRotonda’s mixed media art piece behind the bar. 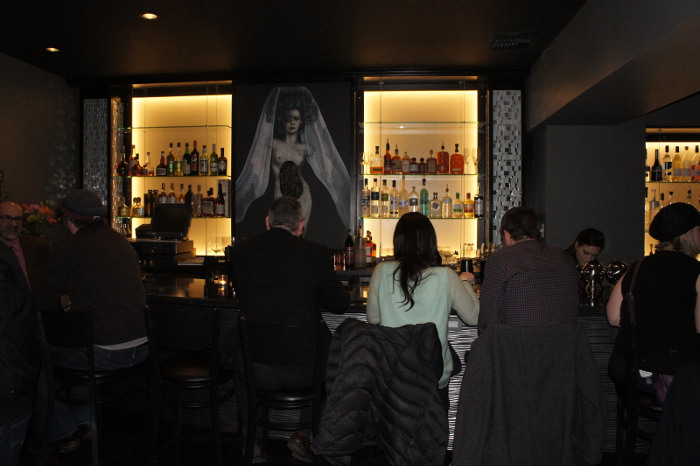 “The whole feel of Black Swan is supposed to be sort of biomechanical,” Monquie said, describing the decision to install LaRotonda’s piece called Call of the Cyren. “Everything about Black Swan I wanted to be like – hot and cold, soft and hard – contrasts. And so there’s nothing like that contrast you get in the painting.”

It’s impossible to talk about Black Swan without mentioning that a lot of work went into transforming the place from a Tex-Mex cantina into a modern and dramatic lounge space. Monique and Bryan said it was important to them to focus on every small detail, including the acoustics. We sat and talked in one of Black Swan’s many booths and easily had a conversation over a chatting crowd and house music.

The layout is designed to “promote socialization and make you feel like you’re part of this really nice atmosphere,” Monique said. “Or, you could be in this really private seating, but it’s all included in the same room.”

In keeping with the surroundings, the food is decidedly modern American. Chef Maurice Tossah, formerly of Trattoria Aroma, put together a menu that emphasizes small plates and features unique twists on American classics, like a braised pork belly BLT or a crispy rabbit and waffle. The owners said they wanted to keep fare light to encourage socializing, rather than gorging.

Black Swan Lounge also features an impressive list of both house and classic cocktails assembled by Jason Briandi, a former beverage director at Fiamma Steak and 31 Club. The names of the house cocktails, like the Bespin Mule and Seven of Nine, all include sci-fi references and use unique ingredients like blackberry jam and blood orange puree. 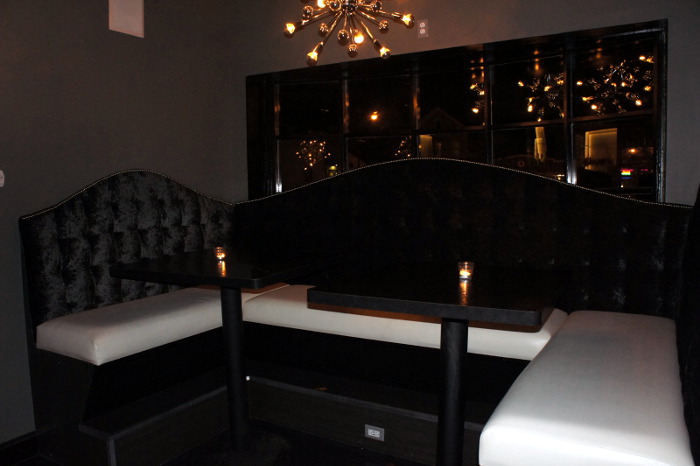 If you’re going to a place described as a classic lounge, you might be worried about getting dressed up, but Bryan and Monique assured me there is no dress code and customers can wear anything from jeans to an old Jim Kelly jersey.

That being said, Monique said she hopes people coming out to Black Swan feel like they want to look their best and maybe even wear that stylish frock hanging in the back of their closet.

“We want to inspire people,” she said.

Above all, Bryan and Monique say they want to provide customers with an experience, a chance to get away from the stress of the office or the classroom.

They are planning to build out the patio in the near future, but they’re also thinking about another major development. The couple are expecting their first child in June, a baby boy.