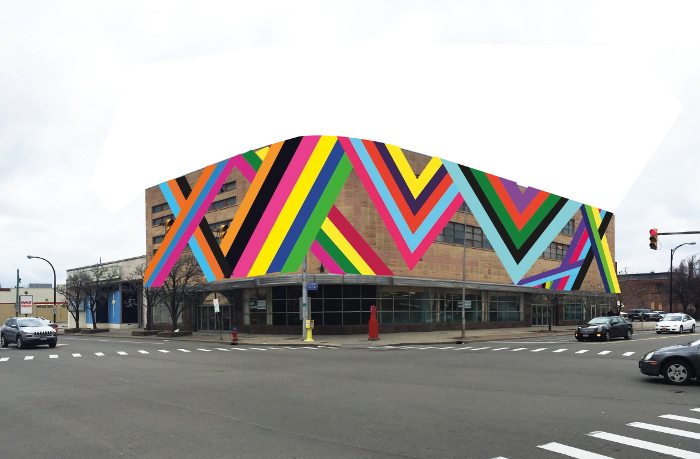 Although Buffalo is often nationally recognized for having preserved many of its 19th and 20th century architectural treasures, magnificent buildings all too often fade into the background, blending into the wallpaper of life.
Brooklyn artist Amanda Browder is looking to change that for a few lucky buildings this week through her Spectral Locus art installation.
At 950 Broadway, the former Richmond Methodist Episcopal Church at Richmond Avenue and West Ferry Street and the Albright-Knox’s Clifton Hall, Browder and a team of volunteers will be draping each building with colorful fabrics – an attempt to draw attention to building you may have driven past countless times before and not given a second look.
If hanging fabric as a piece of art sounds familiar, it might be because of the iconic works of Cristo and Jeanne-Claude, which include wrapping the Reichstag in Berlin and erecting large fabric-wrapped gates in New York City’s Central Park. Their works focus on space, objects, and architecture.
This art installation, on the other hand, is meant to emphasize the work behind the visual elements and final product. Browder recently told me that moving into a working class Brooklyn neighborhood as an artist several years back inspired her to pursue collaborative public art.

“When I first moved there, I really wanted to do a project where I felt like art, which I feel is like a part of my livelihood or my soul, could be a way for me to get to know my neighborhood and not feel like I was just a nomadic artist,” she said.
In order to make this grand piece of art a reality, the artist has already partnered with several community groups, bringing together peoples who otherwise would have no reason to collaborate. The sheets of fabric were created from donations gathered around Western New York. The individual pieces were sewn together by a collection of community volunteers, including groups from The Olmsted Center for Sight. The Buffalo Arts Studios and Stitch Buffalo, a refugee women’s program dedicated to cultivating textile arts skills, are also involved.v
Browder noted that many of the donated bits of fabric she got were stored away for years by people who had once envisioned using them to make clothes, curtains or bed sheets.
“Every little part is a little story of a different citizen in Buffalo,” she said.
The entire effort is designed to encourage collaboration and communication in order to break down social barriers, but the intention is also to disrupt the idea that art is aloof or antagonistic to the viewer.
“The artwork is located in the work,” said Browder’s statement of the project. “That is, the production of the work is where the artist locates the value of her work — where the art is.”

Starting on Wednesday, Browder was on-site directing volunteers on the course that the work should take.  Developed with 3-D modeling programs, her designs are specifically tailored to work with the buildings’ architecture and surroundings.
Funded through a prestigious $20,000 grant from the National Endowment for the Arts, the installation was made possible locally through a partnership between Cedarland Development Group and the Albright-Knox Art Gallery.
Since the emphasis of the project is on the ideas behind them, the visual elements of the installation will only be up for two or three weeks. The lasting impact, Browder told me, will be in the way it changes people’s concepts: about the people in their community, the buildings they see every day and the idea of art itself.
“I like the idea that, when people drive past, they check (the installation) out and it shocks them a little bit. Then, after a couple weeks its gone – all of a sudden that building changes. It has an energy that you’re like, ‘Wait there was something up there before. There was a little yellow pattern up on that turret, and all of a sudden that turret seems closer than I expected, or bigger!’
“So I like the idea that the buildings can resonate afterwards, and they their own self, silent memory that’s created after the fabric comes down.”
Head out to see the art happen in real time. If you snap a photo or two don’t forget to #hashtagstepoutbuffalo when you post it!
For more information visit albrightknox.org.

Brett Llenos Smith is a freelance writer based in Buffalo’s Allentown neighborhood who has been covering local food and culture for Step Out Buffalo over the past six years. As someone with a multi-ethnic background, he has a passion for exploring and understand the many diverse corners of Western New York.
Find More ➭ Sponsored Content, Step Out College