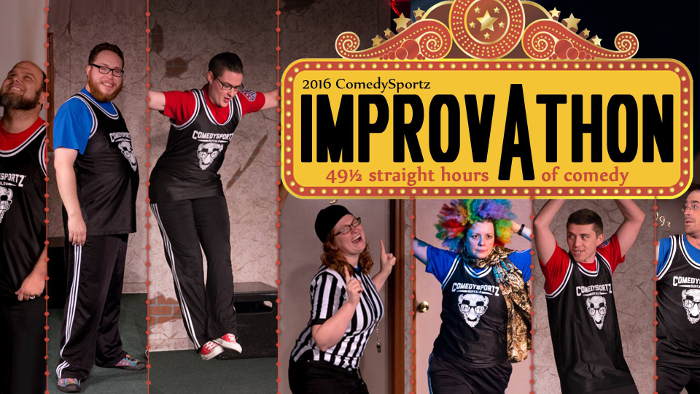 One part comedy, one part sporting event, and one part marathon party – the 2016 ComedySportz Improvathon is the 8th Annual comedy festival hosted by ComedySportz Buffalo at The Arena at Snyder Square in Amherst.
Spread over 49 1/2 hours and three straight days from April 8 – 10, there will literally be improv happening whenever you’re ready for it.
Improvathon features 25 straight ComedySportz matches, which is improvisational comedy played as a sport. Teams of professional comedians from across the US compete for laughs and points while a ref calls fouls and gets suggestions from you, the loyal fans.
Zero scripts. Zero pre-planned scenes. One winning team.
Improvathon is an all ages event. As the company likes to say, “We’re funny enough for your bachelor party, and clean enough for your church group.”

There will also be a weekend-long basket raffle and live auctions throughout the event.

Tickets for this ridiculously fun and entertaining way to spend a weekend in WNY start at just $1 for the off-hours matches and max out at $10 for prime time matches (a two-hour block starting on even-numbered hours). If you’re planning on staying for more than just a couple of hours, get an All Access Pass good for as much comedy as you can handle throughout the weekend.

Guide to Boutique Charcuterie Board Companies in Buffalo & WNY