Update Aug 2015: The Ward is now open for lunch Monday – Saturday at 11 am and Sunday at noon.

As we reported last month, Riverworks is going to be expanding over the coming months and the newest feature set to open at the multi-use facility is a casual dining restaurant called The Ward.

Set along the river-facing side of the facility, The Ward will have both indoor and outdoor seating stretching all the way from the ice rinks end of the building to the side facing the Labatt Blue silos.

Owned and operated by the same group that manages Pearl Street Grill and Brewery, The Ward will strive for the same level of food, beer and service – but with a new twist, according to executive chef Adam Irmer.

“The food is going to be contemporary American casual dining, with a bit of an emphasis on seafood,” he said. Irmer said some of the menu highlights include beef-on-weck dip with warm pretzels, shrimp margherita pizza, tater tot poutine, lobster rolls and conch fritters.

Both Pearl Street and its sister restaurant Pan American Bar are known for brewing their beer in-house, and Irmer said the same will eventually be true at The Ward. The Labatt Blue silos are set to be retro-fitted with brewing tanks to brew Pearl Street-style beers by 2016. In addition, Labatt Blue will be the only macrobrew available on draft. 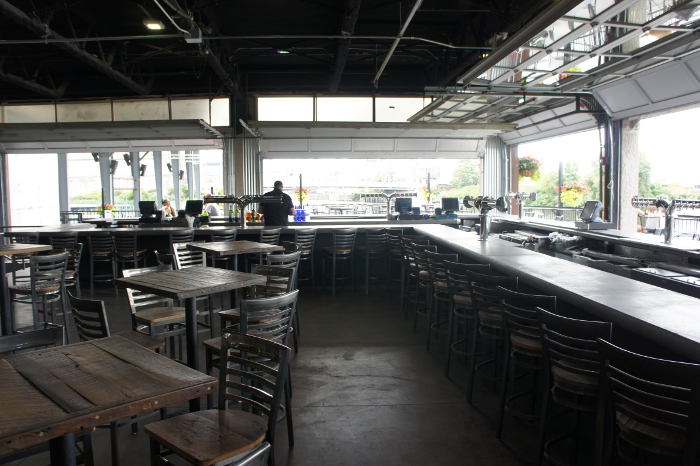 The bar at The Ward

Having worked at both the Buffalo Launch Club and the Red Coach Inn, Irmer said he’s familiar with working on the waterfront and catering to boaters – adding that experience has informed how he shaped the menu at The Ward.

“At the Buffalo Launch Club, people would just come in off their boats and want a quick bite to eat and be out the door,” he said. “So that’s kind of how I modeled this menu.”

In addition to being a full-service restaurant, The Ward will also be available to cater weddings and other events on Riverworks’ upper floor, which holds up to 500 people.  Irmer said they are currently looking at hosting food and beer pairing events in that space, as well as happy hour-type functions and corporate events. While the banquet space isn’t completely finished yet, the executive chef said they are open to holding an event soon and suggested that interested parties inquire via email or phone.

From the pond hockey to pickleball leagues to roller derby, Riverworks will be putting on numerous events of its own, and Irmer suggested those wanting to get full service food and drinks from The Ward should get there early.

“If there’s a concert or something going on and you get in the restaurant – you’re lucky,” he said.

Irmer said the policy is still being hashed out, but anticipate some kind of minimum spending requirement for people looking to get restaurant seating for an event. He added that Riverworks will also have its concessions stands open for events, so those unable to lock down a seat won’t be left out in the cold.

The Ward is scheduled to hold soft openings this week and open fully by next week.