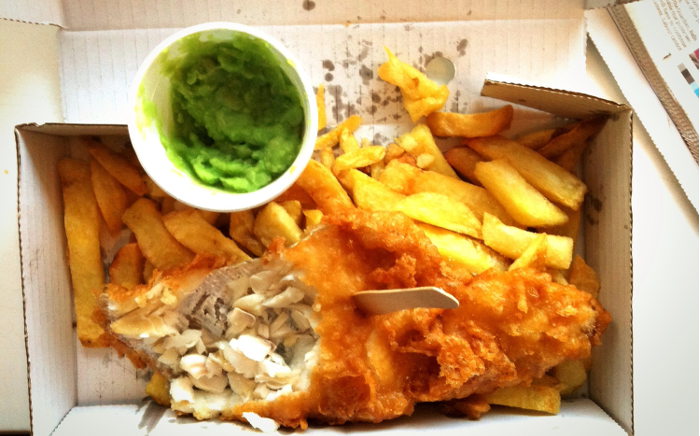 One version of British Fish & Chips

A “chippy” by description is a British noun meaning “fish-and-chip shop”. Obvious to the British, probably not so much for Americans. The British Chippy will be western New York’s first – chippy that is. Located in South Buffalo and owned by Buffalo’s own English pie purveyors Damian and Vicky Parker, the Chip shop plans to deliver a real taste of UK tradition as early as the beginning of May 2014.

The menu at The British Chippy will mirror a traditional British Chip Shop menu.  Not only will you find your fill of British fried food, you’ll be able to grab anything from their pie menu as well! Pick up pies like Melton Mowbray Pork Pie and Classic Pork Pie with stuffing and more will be available, not to mention scotch eggs.

Now, it’s important to remember that fish and chips are NOT the same as a fish fry. “They are completely different, there is nothing like this here in WNY,” replied The Chip Shop when asked how their product would differ from the fried fish we’re accustomed to in this area. Fresh, unfrozen Cod, the most traditional fish used in UK chip shops, will be shipped in from Boston. Trade secrets kept them from revealing their technique and batter recipe that dates back about 100 years. Sounds like we’re in for a real British treat if you ask me…Jolly Good!

Traditionally in the UK, chips are dressed with salt and vinegar and accompanied with either mushy peas (yes, that’s right mushy peas) or curry sauce. The entire fish and chip shop and their equipment was brought over from the UK in order to be certain that the chips are made precisely as they would be in the UK. Damian and Vicky pride themselves on being British and feel there is no better way to go forward than to make everything as authentic as possible using the real thing. One cannot simply buy the exact chips here in the US. So the Parkers imported their very own “chipper” from the UK which will turn potatoes into chips – same size & quality at any regular old Chip shop across the pond.

The British Chippy will be primarily a take-out spot, which is very traditional in the UK. However, they will have a few seats for customers to sit and eat. In warmer months you’ll have the option of picnic benches outside in the…. sun (cross fingers here).

The shop will open at 9am for regular customers that stop in for breakfast, sausage, tea and coffee and will begin serving fish and chips at 11am through around 1-2pm and start up again from 3pm – 6pm. (Future hours depend on customers’ appetite for fish and chips.)

If you’re looking for a true British experience, this is as close as you’re going to get without leaving the area. Traditional fizzy drinks (pop) from all four corners of the UK will be sold along with fish, chips, pies and pasties. The full take-home pie menu will remain a staple at the shop – fully cooked, frozen, and ready to bake up at your leisure. As if we needed another reason to visit, The British Chippy will also offer directly imported tea and scones. It’s clear that WNY now has it’s own little, fully stocked piece of the UK in our backyard.

Opening: First or Second week in May 2014

*Call ahead to make sure they are open, as opening plans can get delayed

Emily is co-founder and Director of Storytelling at Step Out Buffalo. Her favorite things to do are eat, travel, and think up business ideas. Emily is originally from Hamburg, NY and her out of town friends will tell you that she loves to talk about Buffalo any chance she gets.
Find More ➭ South Buffalo
×