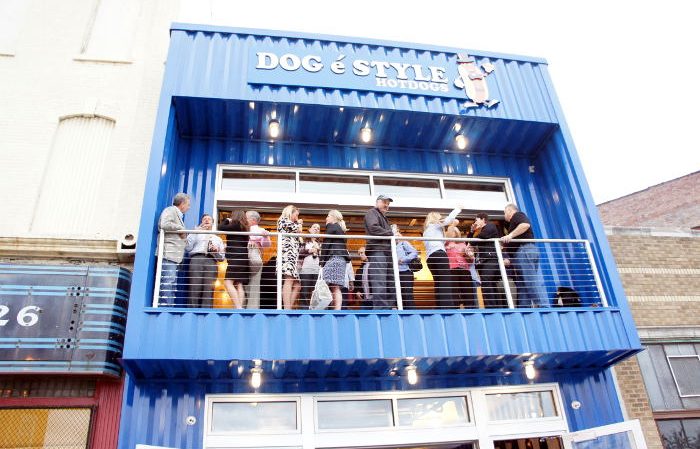 Culinary creatives Victor Parra Gonzalez (Update: Parra Gonzalez is no longer affiliated with Casa Azul in any way) of the now closed Jaguar at the Bistro in Youngstown and upcoming Las Puerta’s and Vincenza (Zina) Lapi of The Blue Balls Bus are teaming up to bring Buffalo a new Mexican restaurant with elevated street food. The pair are targeting an early December 2016 opening date for Casa Azul at the former Dog é Style location at 128 Genesee Street.

“The restaurant won’t be the typical Mexican restaurant you are accustomed to in Buffalo,” claims Lapi. The Name “Casa Azul” (Blue House) plays not only off the color of the building but also pulls from the Frida Kahlo museum in Mexico. “To us she (the artist) embodies someone who was always true to herself, her style and is known for her perseverance, overcoming many obstacles that came her way,” explains Lapi.

The restaurant will have a two level layout which will actually function as two different dining concepts. Downstairs will open first and serve as a quick service “Taqueria” infusing traditional Mexican cooking methods and recipes with some contemporary, innovative toppings and creations.
Upstairs will follow as a full dinning experience with large plates, share plates, tacos, etc. In addition there will be a fully developed bar program (approximately February/March 2017) by Tony Rials who was previously the mastermind behind the bar programs at Mike A’s and Bourbon and Butter at Hotel Lafayette.
We’re told the taqueria menu will consist of a series of different Tacos and Tortas (yaaaaaaaas) ranging from traditional chicken and fish to showcasing different kinds and cuts of meats and offal. According to the press release Casa Azul will also be the only restaurant in town to do a proper “al pastor” taco with the pork roasted on a vertical spindle. They also plan to make tortillas from scratch by hand.

It’s worth mentioning that plans were in place at one point to turn the former Dog e Style space into a Mexican restaurant called Masa y Mezcal, a project that would have brought together Gonzalez and recently arrested Sergio Mucino who opened Don Tequila and La Divina among others. Gonzalez also has a solo project in the works called Las Puerta’s to be located at 385 Rhode Island st. in Buffalo.