Contemplating the Alter Ego at 464 Gallery 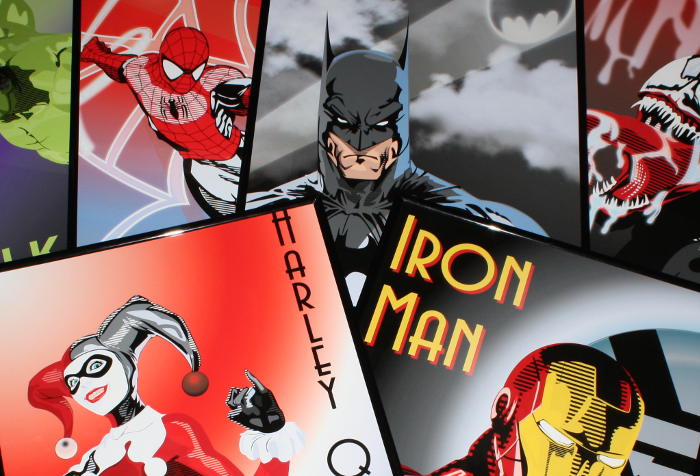 We all see comic book villains and heroes as something we would like to be – somehow more special than everyone else. However, local artist Kevin Beam sees these characters, particularly the heroes, as conflicted – caught between their true identity and an alter-ego.

In his upcoming poster exhibition opening at 464 Gallery on Friday, Beam features many well-known superhero characters and asks the question: Just what is the true identity of these super-individuals?

“Most characters, whether they are good or evil, have an alter ego that they can switch to when confronted with controversy or chaos – and that is their ‘powered identity,’” Beam said in his artist’s statement for the exhibition.

In discussing the exhibition over email, Beam told me that he drew on his personal background, both as a Buffalo State design student and a 2nd Lieutenant in the U.S. Army, as inspiration for the show.

“This (duality) can be constructed into an art form in which we see self-conflict and the alter egos becoming one personality or visa versa,” Beam said. “I believe it is between those conflicts we have the true art of one person.”

Beam drew from two distinct styles when creating his illustrated posters: Art Deco and street art/graffiti. While Beam cited Shepard Fairey and Kevin Eslinger as influences, the illustrations tend to lean more heavily toward Art Deco. Beam said the early 20th century style is both an aesthetic and an artistic choice.

“Art Deco is mainly a personal choice in which the art and architecture of the period not only motivates my ambition in art, but effects me on an emotional level as well,” he said. “There is a very glamorous side to Art Deco its architecture and art I think, but a very dark side as well.”

Beam noted that the use of Art Deco in war propaganda is in stark contrast to the style’s simple elegance and futuristic sleekness, which can be seen in the much of the iconic architecture around Buffalo.

“I think Art Deco represents an artistic conflict that also compliments the meaning behind my show,” Beam said.

As for the upcoming exhibition, Beam suggested that those coming in to view the illustrations walk away thinking about their own alter-ego and their own ‘powered identity.’ He noted that the 464 installation was done with the relationships among the characters and their pop culture history in mind.

Exhibition on view through April 1