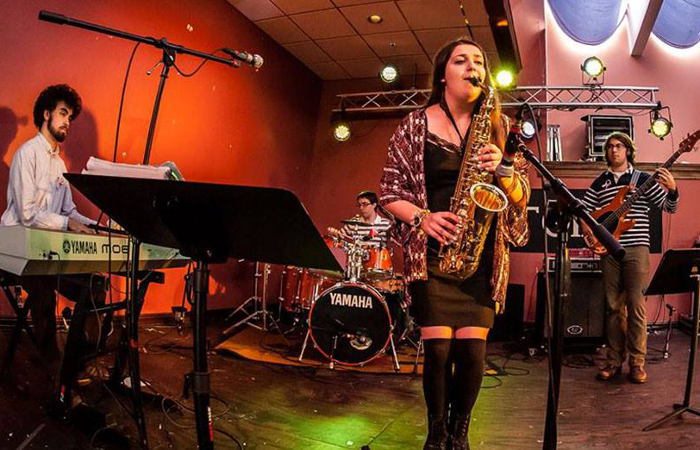 Every year Infringement Festival feels like a scam that the local arts community pulls.
There’s no way all these artists can actually get their act together for a week-and-a-half and put together such a big event, but every year they do it and Buffalo is all the better for it.
There’s so much going on, and almost all of it is great – but here are a few events that really jumped out. So get out there, have fun and enjoy some live local music!

The first night of Infringement at Mohawk Place features a lineup of chill indie and psychedelic rock. Should be a good time for people who think a rock show doesn’t need a mosh pit.
8pm – Show Up
9pm – The Vendo Llaamas
10pm – The Good Neighbors
11pm – Quantum Folk Lords
Midnight – Bold Folly

The Underground is known more as a hotspot for Buffalo’s LGBTQ community but on this night, it’ll host a small electronic music lineup of artists taking dance music back to its 70s and 80s roots. This one feels like and unexpected home run and that’s why it made this list.
10pm – Whiskey Gatorade
11pm – Wood Bois

Have a budding artist, musician, or performer in the family? Then help them get connected to their local arts community with family-friendly event. Think of it as a real live Buffalo’s Got Talent
9:30am – Drawing Sketches of Performers
9:30am – The Hoopathon of Buffalo
9:30am – Radical Roots
9:30am – Throw.Fire.Consume
10am – Scantron
10am – WNY IMPROV
10:15am – El the Mime
11:30am – Anti-Matter
noon – Affinity

Bluesy, funky, groovy, ska-y… these Canadians play only the most danceable rock n roll music and that’s the perfect soundtrack for some day drinking on a Saturday.
3:30pm – 6:30pm – Diesel Dog

A no-bullshit and female-heavy lineup of local alternative rock. If the Kerfuffle festival is your cup of tea, than this night at Nietzsche’s will be your bottle of kombucha.
8pm – Sadie Saturday Night
9:30pm – Like a Panther
10:30pm – Kerry Fey
11:30pm – The Patterns
12:15am – Meria/HauntedGypsy
1am – Dead Lounge

Hot Mama’s Canteen has some of the best food in town and this chill #SundayFunday lineup of bluesy rock is a great excuse to head out to Black Rock. Expect a lot of songs you know and some kickass sammies.
5pm – That Virginia
6pm – The Covers
7:30pm – Road To Azure
9pm – The Space
10pm – Noah Gokey

Celebrate the great we recently lost by leaving it all out on the dance floor. Costumes encouraged.
7pm – 1am Various DJs and live performances

With bands playing grunge and punk at a bar that hasn’t been renovated in more than 25 years, this show is so 90s – you’ll be asking the bartender for a “Cup o’ Chino”.
8pm – Solidbreath
9pm – bigbottlerocket
10pm – Major Arcana

There’s a lot of funky hip-hop going on for this last Saturday night of Infringement, but this lineup of local veterans looks a cut above the rest.
10:15pm – Dark Matter Trio
11:15pm – My Rap Name is Alex
midnight – Brownman & GRUVASYLUM feat. Mad Dukez

When: Thursday July 28th – Sunday August 7th
Where: Various venues around Buffalo
Cost: Free
MAP  /  SCHEDULE
For more info on the festival check out their Facebook page and go to infringebuffalo.org.