Beer and the Buffalo Sabres are a match made in hockey heaven so it only makes sense that our friends at Labatt USA would open up a flagship brewing operation right next to KeyBank Center — the Labatt Brew House and Draft Room.

The brewhouse is a partnership with Pegula Sports and Entertainment and it recently opened its doors to throngs of people. 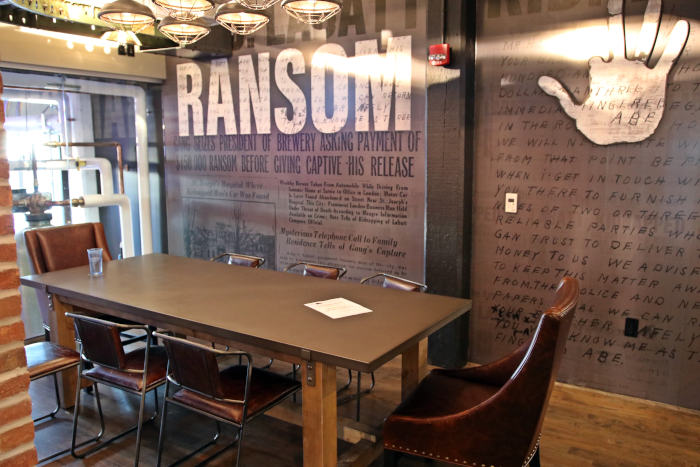 On our opening day visit, the newly-minted brewhouse felt like a bit of Toronto had been plonked down next to the arena. Our neighbours to the north have mastered the bar-restaurant that merges an old building with new technology, that’s lively but family-friendly, that serves smart comfort food, that’s clean and welcoming. Call it Northern Hospitality.

After walking in the front door, an inclined walkway takes you up past brew tanks and conveyor belts to the reception and main bar area. Around the corner is the Draft Room bar where house-brewed beer is available. Past the main bar is a little merchandise stand and beyond that is a massive indoor seating and food service area. Outside is a 4,000 square foot beer garden that will be open based on the season. There were flat-screen TVs visible in all of these common areas, perfect for watching sports.

The place was packed with Baby Boomers, young professionals and Gen Xers, with little kids bobbing around here and there. Background music lilted over the sounds of the chattering crowd and the air was filled with a faint scent that could best be described as New Restaurant Smell.

As details about the Labatt Brew House and adjoining Draft Room trickled out over the past few months, it became apparent that it was going to be much more than flat screen TVs and aquaducts of Blue Light. This was going to be an operation that took beer very, very seriously.

Sure, all your favorite Labatt products would be on draft, but in the Draft Room, brewers would go in hard on the craft beer craze like Zemgus Girgensons flying into a puck-carrying defenseman. Instagram-friendly New England IPA? Check. Fruited gose? Uh huh. Kellerbier, a style on the lips of every beer geek? Oh ya buddy.

Brewmaster Ryan Brady and his staff got massive shout-outs from local brewers and beer geeks in the run-up to opening day, meaning we should expect good things. Labatt has said beers coming out of this tasting room could go on to become the next limited-run, regional, seasonal or even core Labatt beer. So feedback is welcome.

Based on the beers we tried and a scan of the menu, it’s safe to say all the house-brewed beers are super drinkable. Unless you’re all a-boot IPAs and potent barrel-aged stouts, you should find all kinds of house-made liquids to like. The kellerbier we tried was a malty, fresh and flavorful pilsner and as crisp as a spring day in the Old First Ward. The strawberry gose was had a bright berry aroma and tart, slightly salty taste. For craft beer, everything was very reasonably priced: pints were $5-7.

In addition to offering up Labatt products, the new brewhouse also has dozens of local and national craft beers on tap. Even the snobbiest beer snob should find something to like here. There are also wine and cocktails available, in case you want to go to a brewery and not drink beer.

Food options can best be described as regional munchies: chicken wings, poutine, pierogi, sausages, smoked meat and barbecue ribs; the kind of food that is a necessity if you’re pregaming and having a few beers at the arena.

Like an extended Sabres winning streak, a flagship brewhouse in the Cobblestone District was long overdue. Maybe if we all go there regularly and drink enough pints, the whole cup lifting thing will catch on in the big building across the street.

Our food is only part of the story. At Fresh Catch Poke Co. you’ll find that all of our packaging and tableware…
.
Change Location
To find awesome listings near you!
X