Dreams Do Come True: Breadhive is Now a Café

Photos by @colin_patrick for Step Out Buffalo

By itself, a bee is only capable of doing so much.
But as a collective, the diligent insects are able to do so many fantastic things: Build a hive, assemble honeycomb, make honey, pollinate an orchard and protect their queen.
The same power of collaboration can be seen at the new Breadhive Café.
Started just two years ago, Breadhive has gone from a hobby among friends to a retail/wholesale outlet and now to a full-blown restaurant café. It’s a meteoric rise that has undoubtedly been fueled by a rare level of teamwork.
On a recent visit to check on the café’s progress, I watched as Breadhive’s workers put down final touches and buzzed with the efficiency of a well-oiled machine.

“It’s always been on our radar,” Valerie Rettberg-Smith, one of Breadhive’s worker-owners, told me about starting a café. “It was actually more of a reality for us much sooner than we thought, which is great. I think from the outpour of support from our investors, the big hype and people loving our bread that we love so much too: We were able to start much earlier.”
Valerie told me her team is counting on Breadhive’s unparalleled baked goods to set them apart from other local cafes and delis. The menu’s primary focus is sandwiches that incorporate products from other local producers, like the local fermentery Barrel + Brine.
“We all love Barrel + Brine’s beet and caraway kraut, and I’m like, ‘We need to use this on a sandwich,’” Rettberg-Smith said. “So then we’re like, ok pastrami, thousand island dressing, this and this…” 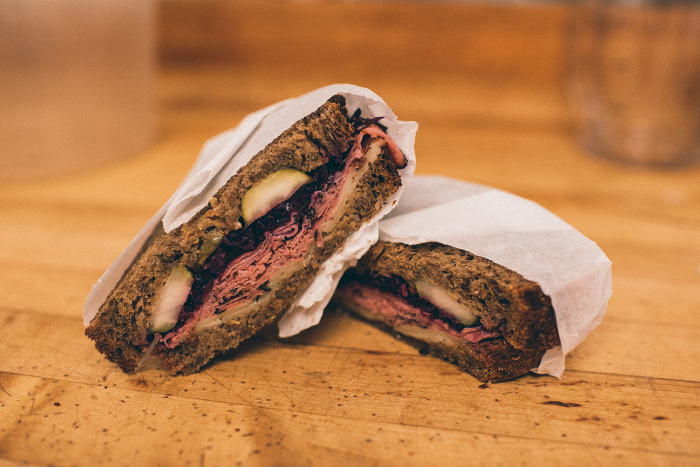 The ROBYN / Photo by @colin_patrick

That sandwich, the ROBYN, is a menu standout. But there are so many others. The BJORK has tempeh “bacon”, Barrel & Brine Kimchi, avocado, sprouts, greens, tomato, and spicy mayo. The creamy, fruity FIONA has brie, fontinella, apple slices, fig spread, and sliced dried figs.
The café will also feature vegan cookies, lemon poppy poundcake, sourdough fruit scones, and other sweets.
In an effort to keep costs down, much of the work on the new café was done by Breadhive’s worker-owners. Rettberg-Smith said she gained countless DIY skills in making the vision become a reality.
“I just put tile down on the floor in back. I’ve never done it before,” she said. “We’re all working together and it’s been a good learning experience for me because I am, in a way, a do-it-yourself person, but not when it comes to things like that.
“But now, I go home and I think, ‘Oh I could tile my floor.’

While they now count a man in their ranks, its well-know that Breadhive was started by women and it remains a proud example of female entrepreneurship in Buffalo. Rettberg-Smith told me she does notice subtle little differences in the way people interact with Breadhive’s female business owners.
“It’s really funny to see how different people react and the different tones of voice we get and stuff like that,” she said. “So, I definitely see a difference, but we’ve also gotten really great feedback from other women.
“Everyone’s been very encouraging, but sometimes you hear, ‘Oooh do you need help lifting that bag of flour?’” Rettberg-Smith said, her voice squeaking up an octave.
“No, I don’t. I got this.”
Breadhive recently shared this blog post about a few changes to their products since their start. Check out the changes here and follow along with updates by following Breadhive on Facebook, Instagram, Snapchat, and Twitter.