Eckl’s Brings the Beef in OP 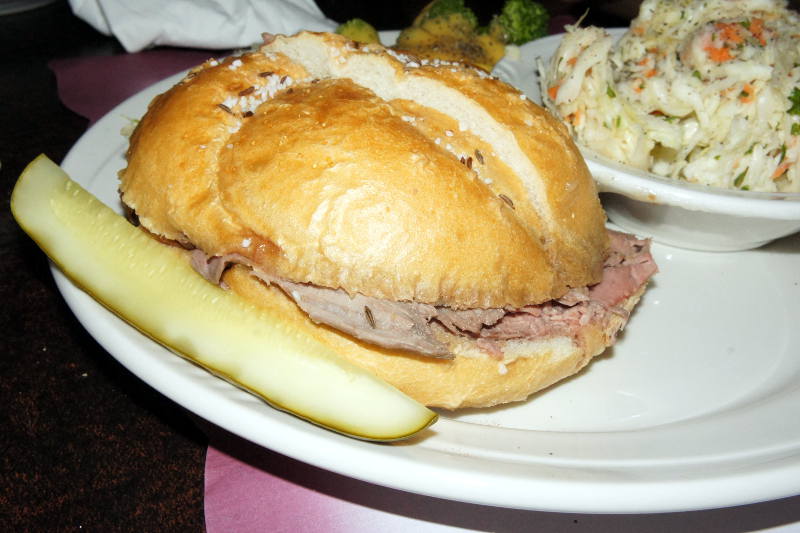 Update: Eckl’s has since closed and reopened as of Nov. 2016 under new ownership

Where’s the beef? It’s at Eckl’s in Orchard Park, plenty of it and hand carved to order seven days a week. The building has been a land mark in these parts since they were known as East Hamburg – 1816 to be exact. It has served as a tavern in the Eckl family since 1906. Now tucked away on little Ellicott Road (it was moved from South Buffalo Rd.) it is truly a hidden gem.

Stepping in to Eckl’s is a little like stepping into a time machine. Very little has changed in the past gazillon or so years. The semi circle bar has been serving up first rate Manhattans, Tom Collins or Martinis since prohibition ended. The two dining areas are decorated simply with dark walnut paneling, white walls and splashes of burgundy .

Open every night makes it the perfect place to stop on a Monday night. We gathered with a party of eight to welcome some family who were in town for a visit. Business was reasonably good for a Monday.  Drink orders were taken and a slice of bread delivered to all. I went with a bottle of Sam Adams. They have five old school beers on tap and another dozen or so by the bottle. The selection of interesting craft beers was limited. The wine list is small, but they have a few good options in Kendall-Jackson and Greg Norman.

For starters most ordered salads. I went with the soup du jour – Beef Barley. One other went with the lobster bisque. Both soups were house made and very good. The Beef Barley also had some chunks of potato. The salads were nice, big traditional dinner salads.

Most everyone in the crowd ordered the beef one way or another.  You can get it in a variety of ways – Beef on Weck, beef on bread with gravy, or beef on a plate. – not to mention slow-cooked prime rib served every Saturday and Sunday. They are well known in the south towns for their beef, some say the best  Beef on Weck in all of WNY. I know one local restaurateur whose mother foregoes the free beef at their restaurant for her favorite Eckl’s sandwich – I won’t mention names. You can also order it how you want it cooked, a nice feature that isn’t offered everywhere.  I went with the Beef on Weck (medium rare), broccoli with a cheese sauce and warm German Potato salad. They offer a good selection sides in the veggie and potatoes class. I could have switched the broccoli out for four or five other vegetables. Potatoes come in fries, mashed, baked, baked sweet potato  and traditional potato salad. Much of the menu is house made at Eckl’s.

Everything was excellent and plentiful, reminiscent of the good old days. The Beef on Weck is a nice size, the beef was superb and cooked to a perfect medium rare. The best in town? Maybe. My favorite was the German potato salad – warm, semi sweet, rich and delicious. This may be the best in town too. In addition to the two sides they gave me a bowl of cole slaw which I didn’t need, but enjoyed just the same.

One outlier in the group ordered the Fish Fry, available seven days a week . Her grandmother went with the sea bass. While I didn’t try it the report was very positive.

No reservations taken, but if you have a party of 8 or more a heads up phone call to the restaurant is recommended and  might make everyone’s  life a little easier.

Lots of good food in a friendly, family atmosphere have kept this place going for over 10 years. From the looks o i they’ll be around another 100 or so. If you haven’t been here for the Beef on Weck you need to add it to your bucket list.