Photos by @colin_patrick for Step Out Buffalo

When people come in from out of town, where do you take them for the ultimate Buffalo Experience?
Pearl Street? Anchor Bar? (716) Food and Sport? Hutch’s?
I’d like to suggest one place to add to that go-to list: Thin Man.
A collaboration between real estate developer Rocco Termini and restaurateur Mike Shatzel, Thin Man has a Dream Team roster that looks poised to impress both your neighbors and those visiting from out of town.
Under the watchful eye of Rudy Watkins, a co-founder of Community Beer Works, Thin Man features a full-blown brewery operation. Watkins told me Thin Man’s operation will be forward thinking; focusing on hops, Belgian-style beers, and wild yeasts.
“I’m super, super excited to be making some funky stuff over here,” he said. People can expect in-house beers to be ready around the start of July. 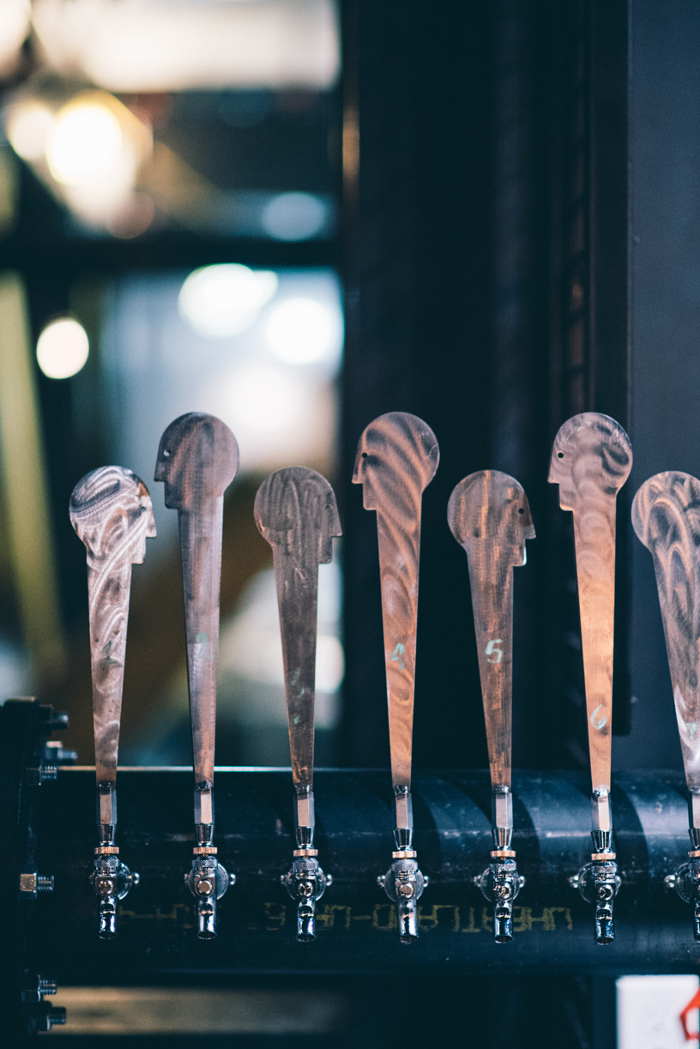 Photo by @colin_patrick for Step Out Buffalo

If food, not beer is your thing, the kitchen at Thin Man is being run by Bruce Wieszala, a veteran of the local fine dining scene whose resume include stops at Tabree and Bourbon and Butter. At Thin Man, Wieszala is leaving fine dining behind for more comforting fare. Opening dishes include house-made sausage, moules frites, and fried chicken livers.

“The food is definitely gastropubish, and Bruce is one of the most accomplished chef’s in the city so I would think that the food is going to take a step or two up,” Shatzel told me. “Based on the experience and knowledge that he has and based on what I’ve tasted: It’s going to be special.”
Thin Man is also a well-designed gem, with a range of different spaces available for different kinds of parties. There’s a very modern communal dining space on the first floor, a more private group space on the second floor and a mini beer hall on the third floor that features reclaimed wood from an old barn.
The brewpub also has rooftop dining on a space built out over the Elmwood avenue sidewalk, a feature Shatzel directly credits to his partner Termini.
“He thinks outside of the box. I mean I do to a point, but I don’t know much about construction or anything like that,” Shatzel said. “So, I don’t think this would have ever even entered my spectrum of thinking.”
For Shatzel, this will be his seventh operation, and he said he expects it to be his biggest challenge yet.
“This is a major production,” he said. “I could probably fit three Blue Monks in here.
“With Liberty Hound, the challenge there was it being a complete unknown,” he said. “Was anyone going to go hang out at Canalside? But that was insane right off the bat. It worked out well.”

“Here you need a couple levels of management. You need a giant staff,” Shatzel continued. “So this will be a little new to me, but we’ve got a great staff and a great management team and I think we’ll be able to handle any challenges head on.”
When pressed about whether this is a dream team of sorts, Shatzel said it’s starting to look that way.

Photo by @colin_patrick for Step Out Buffalo

“Rocco stepped up to the plate on his side, getting it built quickly and wonderfully. Now it comes down to me, Rudy and the team that I’ve hired, which I think it’s top-notch, in Bruce and GM Mike Pijanowski.”
“I think we’ve got a really, really strong team on all fronts. Once we get used to the size and the monstrosity of this place, I think we’ll crush it.”
For more info and updates follow Thin Man on Facebook, Twitter (where they’ve been keeping people informed on hours), and Instagram and check out thinmanbrewery.com.

Brett Llenos Smith is a freelance writer based in Buffalo’s Allentown neighborhood who has been covering local food and culture for Step Out Buffalo over the past six years. As someone with a multi-ethnic background, he has a passion for exploring and understand the many diverse corners of Western New York.
Find More ➭ Downtown, Elmwood Village
×