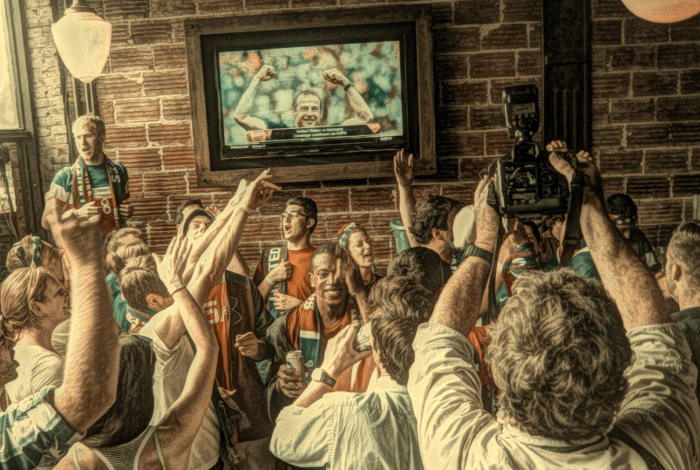 Don’t worry: I’m not going to try to sell you on soccer.
I am, however, going to suggest watching Europe’s biggest soccer tournament, which includes 24 countries, while grabbing some food and a few drinks  – AKA a great way to spend a summer afternoon.
Furthermore, all of us have personal, family or even language ties back to Europe, so it’s easy to pick a team to root for. Went to London a few years back? Let’s go England. Grandma is from Italy? There you go. Took 6 years of French? Finally you can put it to good use. Allez Les Bleus!
Running from June 10 to July 10, the games are all in the afternoon so that might mean you’re in for some day drinking (the horror!) or cutting out of work early. Either way, here are a few places to enjoy the tournament.


Bars to Watch At:

1420 Hertel Ave, Buffalo, NY
The premier soccer bar in Buffalo, Mes Que draws the most passionate fans and therefore it has one of the best atmospheres for watching a game. That also means you will feel out of place if you are here and not watching a game. Did we mention these guys have a fantastic cocktail program and good food too? Cause they do. During the really big matches, Mes Que can get shoulder-to-shoulder packed, but if that happens, there are other options nearby…
Bar Info

1464 Hertel Ave, Buffalo, NY
Gecko’s is known to some as the overflow bar for a certain place up the street, but with great food, cheap drinks and TVs everywhere, the Hertel Ave. sports bar plays second fiddle to no one. Gecko’s told me they make it a point to accommodate soccer fans and put the game sound on for most matches. Drink specials for the Euros include domestic bottles (5 for $12), domestic draft beer pints ($3) and more.
Bar Info

1216 South Park Ave, Buffalo, NY
With a massive selection of meat pies, fish & chips, and beers from the UK and Ireland on draft, you can’t get a much more authentic soccer watching experience in Buffalo. The crowd here tends to be laid back and the bar is family friendly. “We are planning on getting a whole range of European imported beers etc. into the bar for the Euro’s. So if Poland is playing you can enjoy a polish beer etc. We may even do British breakfasts for the early morning England/Wales/Scotland/Ireland games,” explained owner Damien Parker.
Bar Info

3020 Delaware Ave, Buffalo, NY
Owners of The Jake have always been big supporters of WNY soccer fans, so expect an intimate and loyal group of fans watching the games here. Drink specials for the Euros include $1 off specialty cocktail and glasses of wine.
Bar Info

957 Elmwood Ave, Buffalo, NY
Café Aroma prides itself on having a European flair and big soccer tournaments are always on the café’s TVs. I’m told the game sound will always be on for the upcoming Euros and staff will be tracking match results with a large score chart. Drink specials include bucket specials on Bitburger. The café also has many European beers in bottle and on tap.
Bar Info

1009 Niagara Falls Blvd, Buffalo, NY
The ideal spot to watch Ireland and Northern Ireland teams, Shenannigans is also the official supporters bar for the English Premier League’s Arsenal FC. The Irish pub will be showing the 3pm weekday games and all the weekend games. Shenannigans regular daily drink specials will be available as well as a few specials for the Euros, sure to be posted on their Twitter feed.
Bar Info

Group stage matches to Step Out for:

It’s a Cold War on cleats, as a fresh-faced England squad hope to start their tournament off with a bang against an aging Mother Russia. A lot of pressure will be on England’s Wayne Rooney, who many critics say has never lived up to expectations on the international stage.

Sure to spark interest in Cheektowaga and South Buffalo, this match marks the first time the Protestant half of Ireland has played in this stage of the Euros. Keep an eye out for Polish striker Robert Lewandowski, who, lately, has been more dangerous than a screen door on a submarine. Listen for Northern Irish supporters at the stadium to sing “Will Grigg’s on Fire”, a tribute to the team’s prolific striker.

Another match that should spark national passions across Western New York, Germany is a star-studded team favored to win the whole tournament, but their bitter rivals Poland will look to do damage against Die Mannschaft.

Call it the Buffalo Derby, its North Buffalo vs. South Buffalo in a match that should be worth taking a late lunch (and not going back to work) for. Words will be exchanged. Money will be wagered. Families will be divided. Beer will be drank. Shots will be spilled. Work will be missed. Irish-Italian babies will be made.

Check out the full schedule here and let us know who you’re rooting for on Snapchat (stepoutbuffalo), Twitter @stepoutbflo, and Facebook!