Everything You Need to Know About the Silo City Reading Series

Back this summer for their 4th season, the Silo City Reading Series presented by Just Buffalo Literary Center will bring musical acts and visual art installations together with the Buffalo’s arts and cultural community to interact with “some of the most dynamic poets from Buffalo and beyond”.

The three part series happens three different Saturdays throughout the summer – June 25th, July 16th, and August 13th – within the grain elevators at Silo City, one of the most unique places to host an event in WNY and probably the country. JLB calls this series the only high-profile summer literary event in Buffalo, and it’s one not to be missed by locals and visitors alike.
All readings begin at 7pm. These events are free and open to the public. Seats are first come, first served but there is some standing room available. Just show up and enjoy! For more info see The Silo City Reading Series Press Release below and head to silocityreadingseries.com. 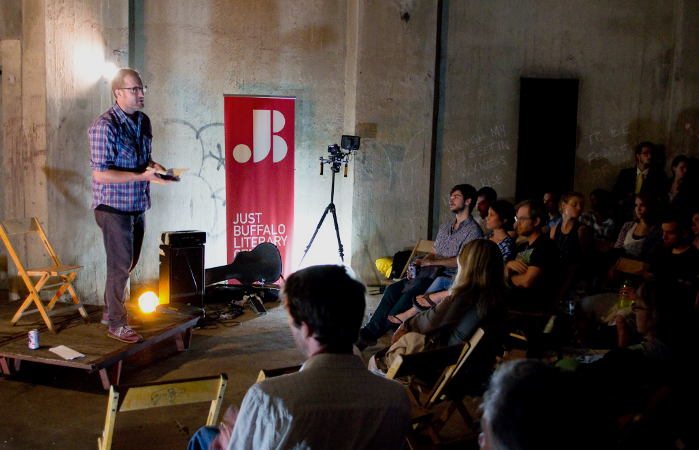 
Press Release June 2016
Just Buffalo Literary Center is proud to kick off the 2016 season of the Silo City Reading Series on Saturday, June 25th at 7:00 p.m. Since 2013, Just Buffalo Writing Center’s Education Director Noah Falck has been curating the region’s premier interdisciplinary literary event. The series has traditionally paired poets, both local and visiting, with musical acts and art installations against the dramatic backdrop of Buffalo’s historic grain silos.
“Sadly, Ada Limón had to cancel at the last moment, but I couldn’t be more excited to have Corey Zeller come to town. Along with Matthew Bookin, music by White Buck, and an art installation by Julian Montague, it will be business as usual at the silos,” said Falck. Corey Zeller is the author of Man vs. Sky (YesYes Books) and You and Other Pieces (Civil Coping Mechanisms). His work has appeared in Gulf Coast, Indiana Review, The Colorado Review, The Kenyon Review, Columbia Poetry Review, Third Coast, BOMB Magazine, The Literary Review, The Paris-American, The Rumpus, PEN America, Verse Daily, and Bat City Review, among others. When asked to describe Zeller’s work, Falck said, “Corey Zeller’s poems work to connect with the greater world. He is not just writing poems for other poets. His poems are loaded with an astonishing array of images and a completely unique energy.”
Reading along with Zeller is Matthew Bookin. Currently a resident of Orchard Park, he has been called by Dazed Magazine one of the ten alt-lit names to look out for in 2016. White Buck is a collaboration between members of the Seneca Nation and the Buffalo arts community. The piece that is being made for the silos is meant to honor the first inhabitants of the grounds that host the silos. Julian Montague is a well-known Buffalo visual artist with piece in the Albright-Knox Art Gallery and is represented by BT&C Gallery.
The Silo City Reading Series is made possible through the support of Erie County Cultural Funding, New York State Council on the Arts and Tappo Restaurant.

About JUST BUFFALO LITERARY CENTER
Just Buffalo Literary Center’s mission is to create and strengthen communities through the literary arts (www.justbuffalo.org). Established in 1975, and celebrating its 40th Anniversary in 2015-2016, Just Buffalo serves the region with author readings and conversations, literary events, writing workshops, interdisciplinary performances, a comprehensive website, and publications. Its signature international author series BABEL has been recognized as“…the most exciting literary series Buffalo has ever seen;” and its newest program, the Just Buffalo Writing Center, offers after-school writing workshops, mentoring, and a year-round writer in residence to teens in downtown Buffalo. More information is available at: justbuffalo.org or by calling (716) 832-5400.