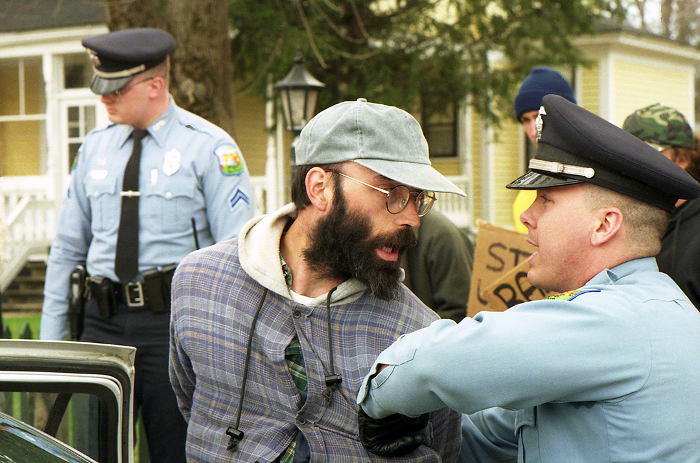 Pikes Peak – This activist was arrested for handing out fliers that urged the public to write their senators and congressmen about the Kearsarge North Timber sale in the White Mountain National Forest of NH. The arrest occurred in North Conway, NH, after a Northeast EF! Regional Rendezvous. / Photo Credit: © PhotoLangelle.org

The rise of social media and the ubiquity of mobile devices allow us access to protests around the world and in real time. However, just 25 years ago – only photographers like Orin Langelle could give society a glimpse of the regional protests taking place in the forests of the MidWest or slums of England.

Starting this Friday, April 3, Langelle’s photography will be on display in Struggles for Justice: Forests, Land and Human Rights – Late 80s to Late 90s. The opening reception for the exhibit is taking place as a part of the opening of the ¡Buen Vivir! Gallery and Allentown’s First Fridays.

Langelle, an Allentown resident, has been documenting social change since the 1970s through “concerned photography,” or the idea that photography itself can be an agent of change. He recently told me that while the point of protesting is to achieve a result, sometimes the act of speaking out itself and its documentation can be just as powerful.

“It’s the struggle that’s important,” Langelle said. “Phil Ochs, the old folk singer, once said that it’s not about winning – it’s about the act, to show that the human spirit is alive.”

Looking over the photos from the exhibit, it’s apparent that Langelle’s lens was able to capture a range of scenes, from desperation to absurdity, in the span of just a few years.

Cree Elder Woman in Whapmagoostui (1993) in the James and Hudson Bay regions of Northern Quebec, Canada. One of the people involved in the day-to-day struggle against the multinational Hydro-Quebec. The people were already impacted by the nearly completed La Grande (Phase 1) Project and also with the people fighting to stop Phase II, the Great Whale Project.
Hydro-Quebec’s La Grande project dam that flooded thousands of hectares on Cree land, displacing all Cree in that area. An untimely water release from this dam drowned 10,000 migrating caribou. / Photo Credit: © PhotoLangelle.org

In 1993, he was able to capture the heart-wrenching image of an older Cree native woman who was involved in a day-to-day struggle against Hydro-Quebec, the utility that displaced thousands of Cree with the construction of a massive dam project. In 1989, his camera snapped the image of mostly naked people from a group called Earth First! dancing in the New Mexico desert after declaring war on the US.

One of the photos included in the exhibit, taken in 1998, is of a massive tripod that protesters used to block various roadways. However, this technique has fallen out of favor as authorities have learned how to safely bring down the tripod by cutting slices out of each leg in succession, causing it to lower slowly to the ground. 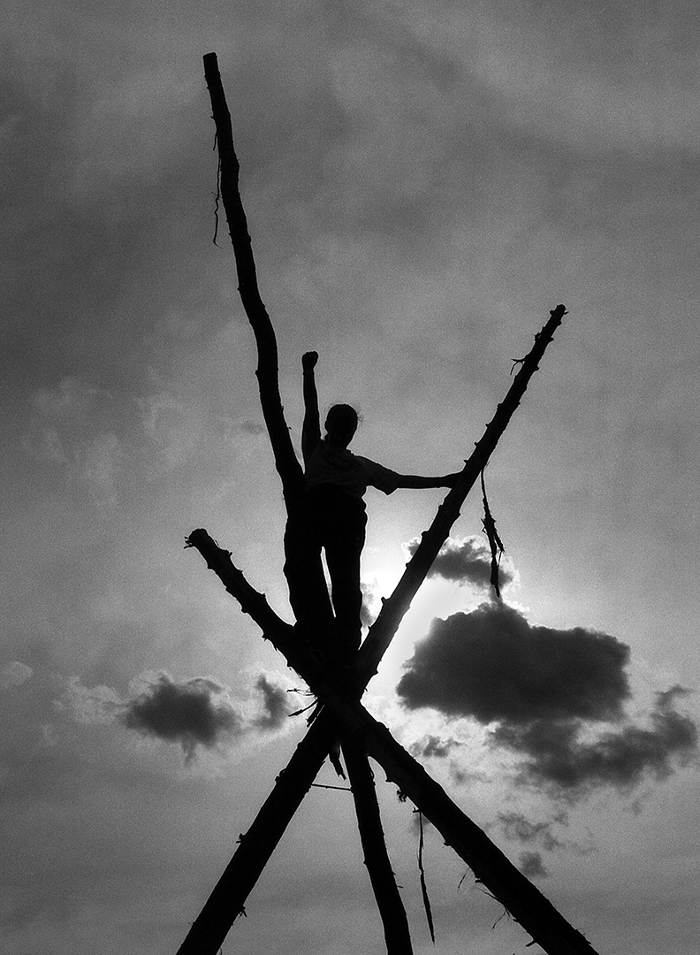 Langelle told me he has seen a lot change in protests over the years, the biggest change coming after 9/11. After the terror attacks and subsequent rolling out of anti-terror measures in law enforcement, Langelle said he noticed a scaling back of protester tactics.

“It’s had an effect,” he said. “But I’m seeing a lot of young people that are becoming a lot more militant. I think there’s probably going to be a lot of protests around the UN meetings in Paris in late November, early December. I’m not really sure what’s going to happen.”

“I don’t want to say (protesters) are going to be more aggressive, but maybe not as polite,” he added.

As far as exhibit visitors go, Langelle said he wants people to walk away thinking about the long history of protest culture and how its documentation can shape that way we look at society.