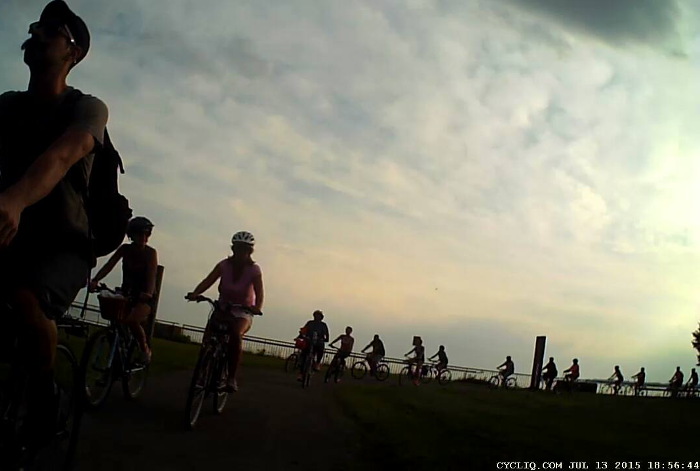 Canalside. Larkinville. Chippewa. Allentown. Grant Street. The Elmwood Village. Hertel Ave. These streets and neighborhood have seen a substantial resurgence in the past decade, but a city is so much more than its party districts or new restaurant corridors.

Slow Roll Buffalo is a roving bicycle collective aimed at exploring Buffalo’s less traveled neighborhoods and getting some exercise in the process. Started in Detroit and spread to other cities, Slow Roll meets up every Monday night at different starting points around the city. Meet-up points have included the Adam Mickiewicz Library on Fillmore Avenue, the Gypsy Parlor on Grant Street and Big Ditch Brewing Company on East Huron Street.

Slow Rollers emphasize their ride is open to all ages, biking abilities and types of bike. As its name suggests, Slow Roll takes a leisurely pace around Buffalo’s various neighborhoods. Each week’s ride varies in length, but averages between 8 and 10 miles and lasts 60 to 90 minutes.

“We’ve got six-year-old kids and 80-year-old women riding,” Slow Roll Buffalo founder Anthony Caferro said in a recent phone interview. “The pace we set really does allow anyone to ride.”

The collective has been steadily growing all throughout this riding season and crowds now typically number in the hundreds. Caferro said the turnout to each week’s event is largely based on the weather. “Our numbers are very much weather dependent,” he said. “Our rain number is about 200 people, and I think that number might grow a little bit moving forward. But the nice weather number grows about 100 people each week, so we’re anticipating getting to 1,000 sometime this season.” Caferro added people thinking about coming out should come prepared with a few essentials. “We ask people to at least come with a spare tube,” Caferro said. “Otherwise we could run out (of spares) or we may not be able to help with a flat if we don’t have the right size. Also, bring a bottle of water.” In addition to being a touring and exercise event, Slow Roll is also an extremely social event and the ride is always capped off by food, drinks and music at that week’s starting point.

“We always try to pick a starting point that’s interesting, has some sort historical significant or community influence,” Caferro said, adding that the size of the group is starting to become a concern. “As we’re growing, we need more capacity,” he said. “If we have 500 people show up and ride and 250 people want to stick around for the after-party: Where do 250 bicycles go?” Despite some growing pains, Slow Roll Buffalo is continuing to expand and as it does – the local chapter is connecting to chapters in other cities. Caferro said some of the founding members have already attended the original Slow Roll in Detroit. A few other members recently participated in a Slow Roll event in Washington DC.

“Slow roll is about community and when you’re riding that slow – you just end up talking to the person next to you,” Caferro said. “More than anything, you’re meeting people you might not normally be meeting and that just goes a step further when you have folks traveling out of town. So then you have people who don’t even live in same city that are part of the same community. It’s exciting.”

To learn more about Slow Roll Buffalo and stay up to date on upcoming rides, visit their website or follow them on Facebook. To see more photos taken by the Slow Roll Buffalo community, check out the #SlowRollBuffalo on Instagram.

Starting at various points around Buffalo

Mondays at 6 p.m. through October and beyond