When the Market Arcade was built on Main Street in the 19th century, it was seen as a modern dining and shopping space that drew inspiration from Roman architecture, a style becoming highly fashionable at the time.
Now, more than a century later, the old terra cotta and Roman brick structure is set to host another cutting-edge concept pulled to the shores of Lake Erie from Europe – a communal food hall.
While food halls are currently all the rage in New York City and Toronto these days, the concept is quite common in Europe, where shoppers traditionally go to a market to interact with small-scale vendors, rather head to one-stop-shop supermarkets.

The layout is actually a concept that Wegmans has been pioneering locally for more than a decade. However, unlike Wegmans, the new EXPO market will feature food and products presented by different individually-operated vendors when it officially opens to the public on Thursday, February 18th at 11am.
The food hall concept has been called, for better or for worse, a gourmet food court and at EXPO; the comparison is an apt one. Owned and operated by Sinatra and Company Real Estate, the first Buffalo food hall is probably the best food court you’ve ever been to: the food is fresh, the meats are slow-cooked and the beer is cold.
Matt Connors, Sinatra’s vice president for development, told me the plan for the space was to pay tribute to the historic arcade, while looking ahead to the future.
“We wanted to keep the historic fabric of the building, but include some modern and more colorful elements,” he said. “It’s really a mix of old and new. We had an artist, Casey Milbrand, who did a mural here that shows the Elmwood and Amherst intersection right around the Pan-American Exposition and then as it looks today.” 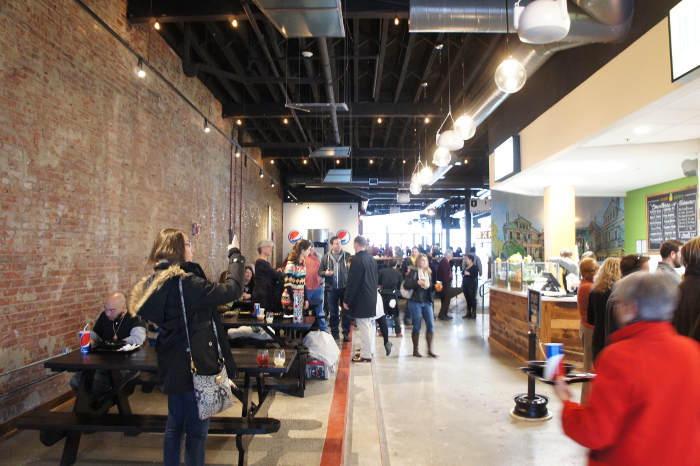 One of the most welcome sights at EXPO is Sun Roll, a smaller outpost of the pan-Asian Sun Restaurant located on Niagara Street, Sun Roll offers vibrant flavors – and also represents the growing diversity of modern Buffalo.
Next to Sun Roll, the fare at Newbury Street also features fresh ingredients, but these fruits and veggies appear in wraps, salads and other presentations that hew closer to American ideas of food.
Upon its opening, EXPO vendors also include Crush Juicery and Mercato (by Osteria 166). If you’re worried about vendors coming and going, Connors said the plan is to keep his tenants there for as long as possible.
“It won’t be a pop-up arrangement,” he said. “We have leases with each tenant and we’d love to keep everyone here as long as possible.”

Sitting at the GBGBs bar recently and sipping on a New Hawaiian cocktail, it was easy to picture theater and lunch crowds filling EXPO with a vibrancy that matches the food, all while light streams in from the 10-foot windows facing Main Street.
“It’s a unique space,” Connors noted. “You can come with a group of friends, and if someone want sushi, they can get that, or if a person wants a sandwich, they can get that at Bobby Alfman’s. It really is kind of a universal take on a restaurant.”
For more info on EXPO visit their website and follow EXPO on Facebook, Instagram, and Twitter.