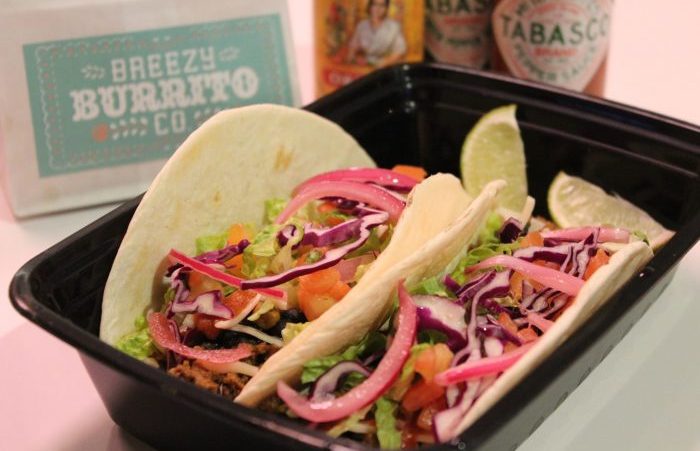 When you interview a lot of small business owners like I do, you notice that they tend to fall somewhere between pie-in-the-sky visionary and hard-driving entrepreneur.
Briana Rose Hunter, who owns the new Breezy Burrito in downtown’s EXPO food hall, falls closer to the latter end of the spectrum.
Hunter was there at the beginning of Gypsy Parlor and at the start of the Lockhouse Distillery in the Cobblestone District. She also grew up in an apartment above her parents’ Tex-Mex restaurant, and all those formative experiences have culminated in the ability to see an opportunity and seize it with both hands. It’s probably no accident that her Breezy Burrito business is already earning high marks with customers and reviewers alike. Did we mention their branding is on point too?

“I spent so much time opening up my friends’ businesses I thought it was time to open my own,” she told me with a chuckle on a recent phone call.
Like all the other food stands at EXPO, Breezy Burrito is a counter-service operation. After placing your order, your food is made right in front of you, in a format that should be quite familiar to fans of fast-casual burrito joints.
With so many Tex-Mex options downtown, Breezy Burrito stands out for its thoughtful use of fresh ingredients, particularly when it comes to vegan/vegetarian and healthy options. Instead of slow-cooked beef, pork, or chicken, vegetarians and vegans can order tempeh as their foundational protein. 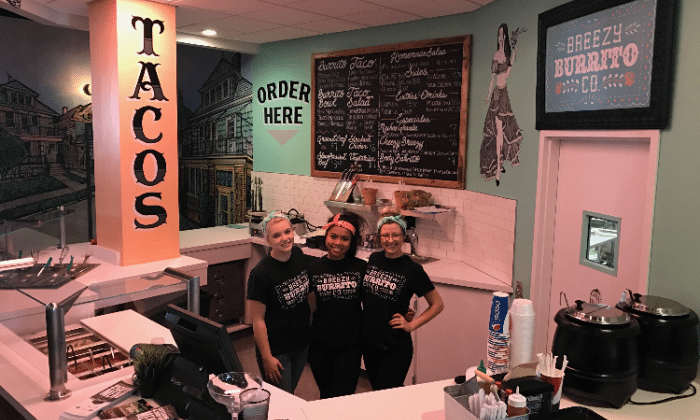 On a recent visit, the vegetarian burrito I had was a hearty mélange of flavors. As someone who was vegetarian throughout much of his 20s, I can tell you that a flavorful and hearty vegetarian option is a life raft in a sea of flaccid and uninspired meat alternatives.
“(A good vegan/vegetarian option) was definitely something that I was trying to break the mold with a bit because I see that so many Tex-Mex places rely on rice and beans to be the vegetarian option,” Hunter conceded. “For me, having so many vegetarian and vegan friends, I didn’t want that option to be it. So I have a vegan Tex-Mex tempeh. My rice is vegan. My black beans are vegan. I also have a vegan chipotle vinaigrette dressing. Instead of using honey, I use agave nectar for the emulsifier.”
Another stand-out menu item at the Breezy Burrito stall is the Body Bar-ito, a fresh, low-guilt burrito created in collaboration with The Body Bar, a gym located next to EXPO. I found the Bar-ito bursting with fresh flavors, and filling – yet, it didn’t weigh me down. Not only is this a good option for someone looking to stick to a diet, it’s also a good choice if you have to eat and run.
All of the burritos at Breezy Burrito are pretty big, about the size of your forearm. That’s a lot of burrito, and a pretty good deal for the price, which can range from $7 to $8.50.
Hunter told me getting the stall at EXPO wasn’t easy. The natural entrepreneur said she had to pitch her restaurant concept, Shark Tank-style.

“I fit the bill because they wanted something that was Mexican, very local, and fresh. They heard my background, thought my story was great and tried my food” before saying yes, she beamed.
In addition to serving up the hungry hordes at EXPO, Breezy Burrito is currently in the process of adding another revenue stream: developing a catering menu. Hunter said her eyes were recently opened to the many details that go into catering and event planning.
“I just got married in September and going through the whole process of getting married, I really got into event planning. I also found that more and more people are looking to book an 11 o’clock, late-night taco bar,” she said, adding that she also hopes to also cater office parties, birthday parties and any other kind of social function in addition to wedding receptions.
If you’re interested in booking a burrito bar at your next event, it’s just one more reason to stop down and try out this unique, business-savvy take on Tex-Mex.
For more info check Breezy Burrito Co. out on Facebook and Instagram.