5 Reasons to go to First Fridays

First Fridays during the winter can be a gloomy affair, trudging from gallery to gallery with only the promise of a plastic cup of wine to keep you going. However, once the weather breaks – First Fridays turn into a celebration of local color, both inside and outside the galleries.

Jumping on the rising temperature and budding plants, the Allentown Association has started taking First Fridays to the next level by blocking off Allen Street between Franklin and Virginia. Many other cities have taken to creating this kind of temporary pedestrian space, referred to as a ciclovia in Latin America, and doing so gives First Fridays the chance to open up the street to all forms of art, performance, food and commerce.

Each month features a different theme for the ciclovia, so watch this space to see what the Allentown Association has in store for those who come down.

Artists and Cyclists (between Franklin and Allen)

For May, the ciclovia will be taken over by bike- and pedestrian-themed art and performances, possibly including freestyle performances from some BMX riders. Gobike Buffalo will also be on hand to provide minor adjustments and repairs to anyone who brings their bike down.

With the bike-friendly ABV recently opening and parking in Allentown always being an issue, it might be the perfect night to head south on the Elmwood Village bike lanes. 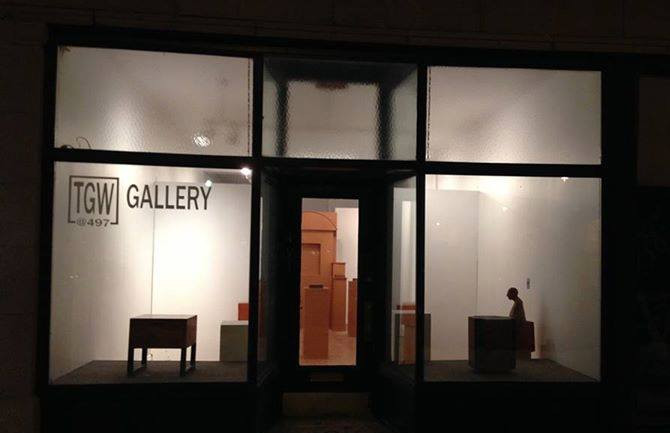 This Friday, TGW@497 Gallery will hold an opening for a group show of local collage artists that run the gamut of collage styles. Joan Fitzgerald has specialized in visceral two-tone forms. Patti Harris embraces the use of found objects in her collage art. Marie Hassett uses fabric and thread to create bird-themed collages.

Dive bar culture is the theme for this show, which features two Buffalo ex-pats now living in New York City. This show is also a sort of launch party for a string of events being curated by local design agency Haute La Vie. Co-founder and CEO Shawn Patterson talked a big game with us recently and stopping in to check out this exhibit can give you a preview of the cultural events Haute La Vie has up its sleeve.

Indigo is one of the more refined galleries in all of Allentown and this month’s First Friday event features the Ghana-born George Afedzi Hughes.

There’s a collage element of the work of Afedzi Hughes, but to my (untrained) eye he’s also highly influenced by street art from around the world. Urbanization, industrialization and capitalism are common themes and the show will feature an installation element that “emphasizes materiality” and the use of found materials “reconstituted as surfaces and objects transformed with paint.”

In a move somewhat reminiscent of reality TV, the artists in this show were given the “water’s edge” theme and asked to come back with art reflecting it. Watercolors (obviously), photographic prints, monotypes and paintings will all be featured.