Cuisine: Tacos and such…

Imagine our (probably everyone’s) surprise when established WNY Chef Martin Danilowicz of Martin Cooks in the Horsefeathers Building on Connecticut Street announced a Sunoco spinoff inside the Mini Mart on Elmwood. The news was met with confusion, doubt, curiosity, and intrigue. After 2 months, curiosity -and then optimism- got the better of us and we trucked it to Sunoco for some MC take-out. [sc:Centerpost-1-700-150 ]

If you’re in the neighborhood or wanting to grab some great take-out, this is a perfectly acceptable and enjoyable option. Likewise, if you’re on the hunt for good tacos (we always are and you should be to), Martin Cooks at Sunoco is worth a try. Please note: there is nowhere to sit and eat, we’re talking full on take-out here.

The evolving menu (according to Facebook) started out as fried chicken with two sides – Coleslaw and Sesame Noodles. Since the end of July when MC at Sunoco opened they’ve added a trio of tacos to the menu – Korean Style Pork Belly, Shrimp with Jalapeno Marmalade, and Lamb Shank with Raita and Cilantro. Burmese Chicken Salad has also made an appearance. Everything on the menu falls between $5 (for a side) – $17 (for a full Fried Chicken dinner which comes with the 2 sides) and is presented in a way that’s a little bit confusing. It seems like there are different prices for full and half orders, but to be completely honest with you our visit did not clear this up. We just handed over some money and went with it. I’m pretty sure $7 gets you 2 tacos which is a pretty sweet deal, and -for the sake of comparison- they are probably almost twice the size of Lloyd’s tacos. 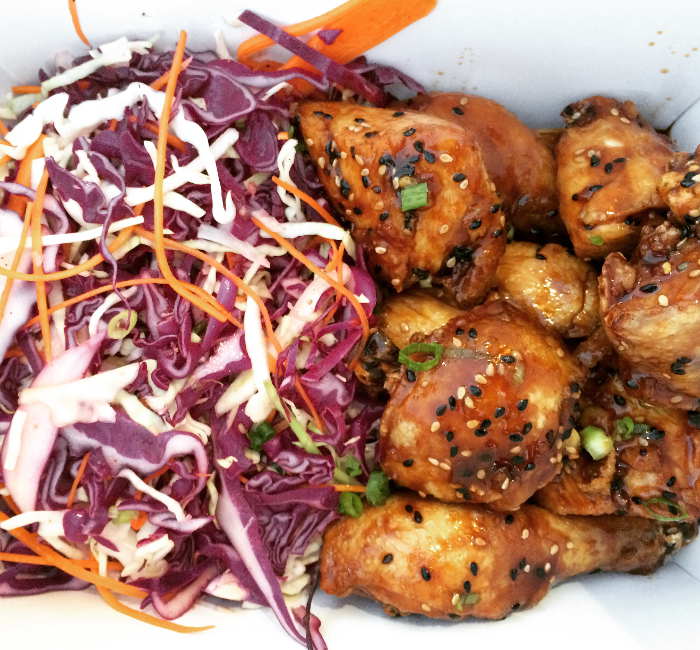 The best part about MC at Sunoco is the accessibility. While Martin Cooks (the original) is only mere blocks from the new take-out stand on Elmwood, the service style isn’t that of a normal restaurant. Dinner service is presented in the form of a prix fixe five course dinner of which they only do two reservation-based seatings per evening with availability for 12 – 16 people each. Don’t get us wrong, we love the OG Martin Cooks, but Martin Cooks at Sunoco is a much easier option for those of us who like to procrastinate and make last minute decisions. Guilty.

Sidebar: We should mention that weekday lunch and Saturday brunch at Martin Cooks (both of which you’ll more than likely find ridiculously satisfying) do not follow suit when it comes to the prix fixe courses and reservations. Feel free to drop in any time and have them knock your socks off in the unique, open kitchen dining room. We actually highly recommended you check it out…which is why it’s one of our Brunches To Put On Your List.

Now, onto what you came for. Martin Cooks may not carry over the ambiance or concept from the Connecticut street restaurant to the gas station stand but fear not, MC @ Sunoco still has their signature inventiveness and flare for the unique. When you walk in the door to the Mini Mart turn right and the counter to the right is where you’ll order your take-out from Martin Cooks with the chalkboard menu behind it propped up against the wall. We gave our order to one of the cooks who proceeded to make our food while we waited for just a few short minutes and then take our payment when it was time.

The day we visited we arrived close to closing time so they were out of everything but the Fried Chicken, Korean Style Pork Belly Taco and Coleslaw. So that’s what we ordered. Sure we were disappointed we didn’t get to try everything else (we had big plans for a “one of everything” order), but the cooks behind the counter were accommodating with the prices which they adjusted based on what they could provide and we were happy to see their menu was going over so well.

The fried chicken was broken down into manageable pieces and tossed in a sort of mild, sweet Asian sauce and black and white sesame seeds and was in a word, tasty. It’s deep fried but didn’t seem battered at all, resulting in a chicken dinner somewhere between healthy and guilt-ridden (okay probably much closer to guilt-ridden.) Normally the Whole Fried Chicken Dinner comes with sides of slaw and sesame noodles, but since they were out of noodles they doubled the slaw and decreased the price. We love them.

The pork belly tacos were simple and delicious, served in corn tortillas and topped with some of the same purple slaw we got as a side. Inside a thick slice of pork belly lay on a drizzle of possibly the same sauce that coated the Fried Chicken – what seemed to be some version of Korean BBQ sauce – and it went really nicely here with the pork and corny wrap.

Emily is co-founder and Director of Storytelling at Step Out Buffalo. Her favorite things to do are eat, travel, and think up business ideas. Emily is originally from Hamburg, NY and her out of town friends will tell you that she loves to talk about Buffalo any chance she gets.
Find More ➭ Downtown, Elmwood Village, Lunch
×