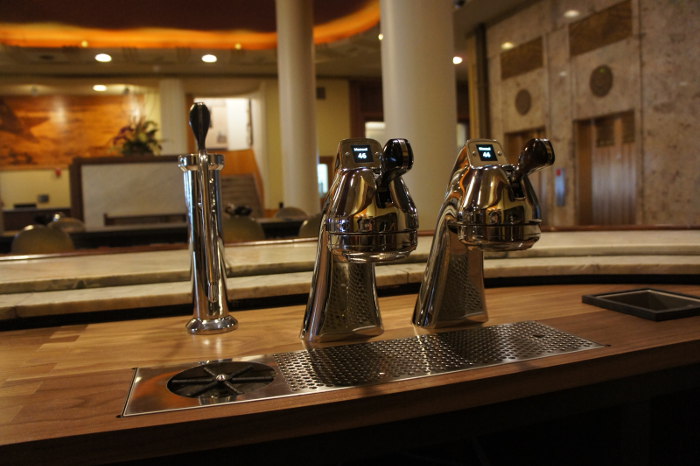 A few years back, James Rayburg was working as an architect and not even thinking about the roasting of coffee beyond his morning cuppa joe.

This week, as the head roaster for Public espresso + coffee, he’s helping to put the finishing touches on his first brick-and-mortar location – a residency within the grand lobby of the Hotel Lafayette.

Rayburg said his interest in a better cup of coffee started with travels for his architecture job with UB and grew as part of a farm CSA (community-supported agriculture) with a group of friends, which provided him with a regular supply of beans.

“Every week we would get together, bring everything we had gotten that week (from the CSA) and we would cook together,” he said, during a recent mid-day interview in the Hotel Lafayette lobby. “And, we would assign random recipes based on the things that we got.”

After a year-and-a-half of roasting coffee for these private events and a few church functions, people started asking for Rayburg’s roasted beans. A connection led him and his partners Sam Scarcello and Matt Rayburg to the Horsefeathers Winter Market on Connecticut Street in late 2013.

“Kind of not really understanding what that was going to be like – we came up with a brand, ordered some bags, ordered some more equipment and went on Amazon and ordered some coffee cups,” Rayburg said. “It was fairly makeshift, but we tried to make it look like we had it ‘put together.’”

“We showed up that first week and sold 100 cups of coffee,” he continued. “We probably made like a couple hundred bucks – but it was, like, the most thrilling four hours of our lives.”

After initial success and building a bit of a following at Horsefeathers, the still-nascent coffee roasting company went through a few misfires.

Through serving coffee at a number of events, the company also found that it had the most success at artisanal food and craft events. Rayburg also discovered that Western New York drinkers preferred a light-to-medium roast.

As part of their roasting process, the Public roasters profile and roast the coffee at a number of different levels.

“We drink a lot of really crappy coffee,” Rayburg said. “Sometimes we sample order some beans that we think are going to be spectacular, and we can’t make magic out of them so we don’t order them.”

“Every coffee we serve is a coffee that the three of us will drink,” he added, noting that about one-third of beans they taste will make the cut.

The residency at the Hotel Lafayette marks the latest step in the evolution of Public espresso + coffee, and Rayburg noted that the installation is a part of developer Rocco Termini’s plan to make the hotel lobby into a vibrant, active “big city lobby space.” The residency is set up at the old check-in counter, and the former architect assured that the installation will not compromise any historical structures.

The menu for the residency will feature a full espresso menu, with customers picking both the size of their drink and the roasted beans to be used. Espresso flights will give customers the chance to sample several beans and roasts. Public also has plans to feature espresso pairings, with different brews being paired with a particular biscotti or chocolate truffle.

Rayburg said Public will focus exclusively on roasting, brewing and serving coffee. The food featured at both the Lafayette residency and an upcoming flagship Grant Street location will be sourced from other local businesses. A partnership with BreadHive has already been announced.

If all goes as planned, Public hopes to be serving at least pour over coffee at the new lobby bar by the last week in February and officially celebrate their grand opening in the beginning of March. Hours to start will be “aggressive” opening at 7 am and closing at 10 pm.

Update: Public Espresso has announced their official opening will be March 4, 2015.

As far as the Grant Street location, which is expected to open later this year, Rayburg said Public will be focused on providing a unique coffee experience on the West Side and not directly competing with established cafes like Sweet_ness 7 or Spot.

Most importantly, Rayburg said Public is looking forward to joining the “foodie heaven” that is growing on Grant.

To learn more about Public and their roasting and brewing methods, visit their website and read their blog.

Brett Llenos Smith is a freelance writer based in Buffalo’s Allentown neighborhood who has been covering local food and culture for Step Out Buffalo over the past six years. As someone with a multi-ethnic background, he has a passion for exploring and understand the many diverse corners of Western New York.
Find More ➭ Downtown